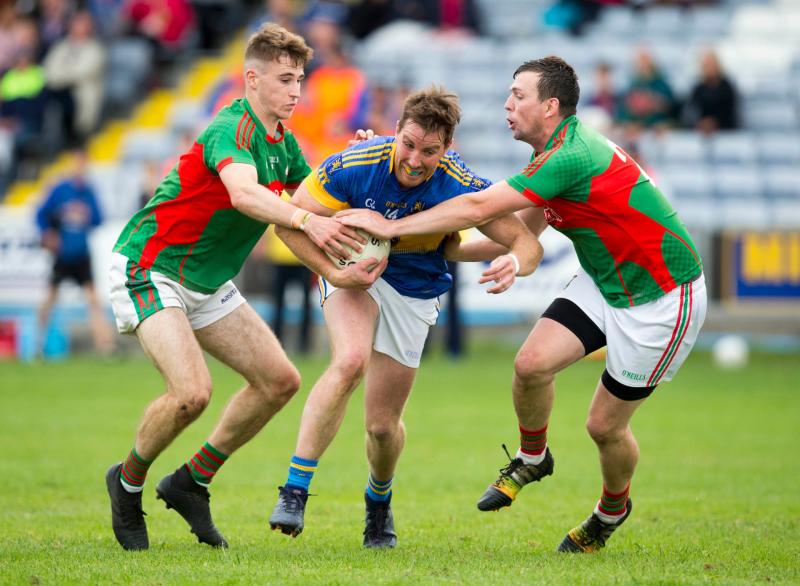 Division 1A champions O’Dempsey’s were brought back down to Earth after they were tactically outmanoeuvred by a well organised Graiguecullen side. Two first-half Aaron Forbes goals proved crucial, as O’Dempsey’s failed to break down the resilient Carlow border side throughout.

The only time the Killenard outfit led was inside the first minute through Michael Finlay. Graiguecullen struck straight back though, as the dominant Aaron Forbes grabbed the first of his two goals.

Jamie Parr sent a long ball into Aaron Forbes, and he rose above Shane Nerney to flick past Padraig Bannon in goals. Conor Meredith provided a swift reply for O’Dempsey’s with a point, but Luke Alsybury flew up from wing-back to respond with a fisted effort.

Matthew Finlay cut the gap back to one with a point from a placed ball, but Graiguecullen responded well to put them three in front. Talented goalkeeper Danny Bolger placed over a free off the ground, before six minutes later, Aaron Forbes grabbed his first point of the game.

Matthew Finlay restored the gap to the minimum with two frees for O’Dempsey’s, but that was as close as they could get, as a Jamie Parr converted free was followed with Aaron Forbes’s second strike.

Ross Hennessy’s shot dropped well short, but Forbes and Nerney were again left in a one-on-one battle. Both players lost their footing, but Forbes was quickest to react to the breaking ball, and his shot rocketed into the back of the net to raise another green flag.

Graiguecullen pushed on their advantage with two points from Laois full back Mark Timmons from play, as he showed he could produce the goods at both ends of the field.

Mark Barry hit a brace of points to close the half, as Graiguecullen led 2-6 to 0-7 at the interval.

Another excellent young talent, Brian Byrne, opened the scoring in the second half with a point. However, O’Dempsey’s introduced experienced campaigners in Rory Bracken and Brian Nugent at half-time, and this reignited their challenge.

Graiguecullen, though, stuck to their gameplan. Their kick-out strategy looked well rehearsed, as they won the lion share of possession. Danny Bolger hit a few stray kick-outs, but a lot of pinpoint ones as well.

Mark Timmons grabbed his third point of the day, before Jamie Parr floated a beautiful score between the posts .O’Dempsey’s had a golden opportunity to get a goal back, but Michael Finlay saw his effort saved by Danny Bolger.

Mark Barry left just a goal in it, but O’Dempsey’s were running out of time, and they didn’t look like they had the ingredients to break down the Graiguecullen rearguard.

Danny Bolger swung over another free off the ground, before O’Dempsey’s man Barry Kelly found a passage through the Graiguecullen defence. However, Bolger again saved, as he looked determined to keep a clean sheet.

Matthew Finlay split the posts to leave three in it again. O’Dempsey’s pushed up on Graiguecullen’s kick-outs, but Brian Byrne scored the insurance point on the counter-attack to send Graiguecullen into the winners section, where they’ll be gunning to shock champions Portlaoise.

While Aaron Forbes will grab the headlines with his goals proving the difference on the scoreboard, Graigucullen’s defence was the winning of this clash. Danny Bolger showed what he’s capable of in goals, while Trevor Collins kept Conor Meredith quiet. However, Mark Timmons’s three points along with his leadership at the back earns him this accolade.

Aaron Forbes’s second goal put a gap between the teams that O’Dempsey’s just couldn’t make up.

Emo man Eamonn Strong did little wrong in this one, helped with having no big decisions to make.

Graiguecullen were impressive here, but will their defensive approach work against a Portlaoise side who expect this tactic from the opposition every time they go out? Aaron Forbes will need another big day up front for them to be in with a shout.

Jamie Parr landed a beauty under the stand in the second half.