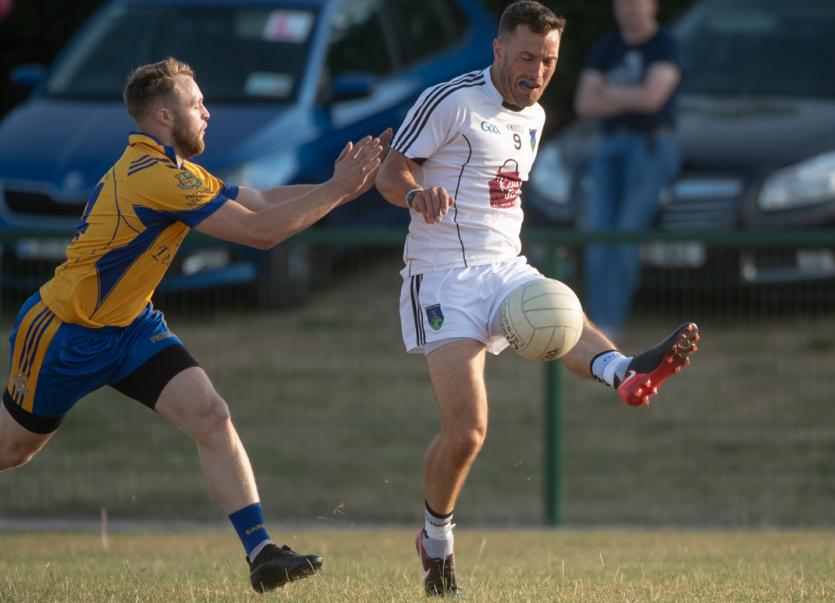 Courtwood's Niall Donoher's was exceptional in their win over Mountmellick Gaels

Courtwood held off a spirited second-half comeback from Mountmellick Gaels to secure a coveted opening round win in McCann Park on Saturday night.

Fresh from their Division 2 final victory over St Joseph's, Courtwood continued that form into this one and had opened up a five point lead by half-time. Mountmellick Gaels were tentative favourites coming into this game, given the usual success of teams freshly relegated from the senior grade, but they were caught out by a strong opening half from Courtwood.

With Rosenallis also impressing with a one-sided win over Portlaoise, it promises to be an interesting intermediate championship this year, and no doubt both of these teams will have a major bearing on where the honours will ultimately end up.

Courtwood made their intentions known early on, as they won possession from the throw-in, broke forward at pace and Rory Doyle slotted it over the bar. Buoyed by that score, Courtwood pressed further ahead, as midfielder Danny Luttrell landed his first score of the day, while Alan Kinsella also opened his account. At the other end, Mountmellick Gaels were struggling to get anything going, but Jason Caffrey eventually opened their account in the seventh minute.

Alan Kinsella hit back for Courtwood, blazing over the bar from close range. Niall Mullen converted a free for Mountmellick Gaels, and then teenager Niall Dunne struck for the first of  Courtwood's goals, as they took command of the game.

Their lead was eaten into by a Ben Reddin double, but Courtwood responded in fine style. Captain Matt Kelly got a sight of goal and needed no second invitation, striking low past Eoghan Keogh for a fine goal.

To Mountmellick Gaels's credit, Niall Mullen and Ryan Mullaney both hit the target before the interval, and they trailed by five as the teams took a breather, 2-7 to 0-8.

Mountmellick Gaels simply had to step things up on the restart, and they duly did. Half-time substitute James Mullaney kicked the opening score and then a double from Niall Mullen had them within two points.

With the pace of the game picking up, Mountmellick Gaels were then the recipients of some good fortune when they raised a green flag courtesy after an own goal.

That set the scene for a tense finish to the game, as Niall Mullen and Danny Luttrell came to the fore for both teams with some impressive free-taking. Cian Doyle also chipped in for Courtwood, as goalkeeper Eoghan Keogh responded with a point from a placed ball for Mountmellick Gaels, but with time almost up, Courtwood held a one-point lead. Mountmellick Gaels attempted to maunfacture an equaliser, but gritty defending from Courtwood meant they held on.