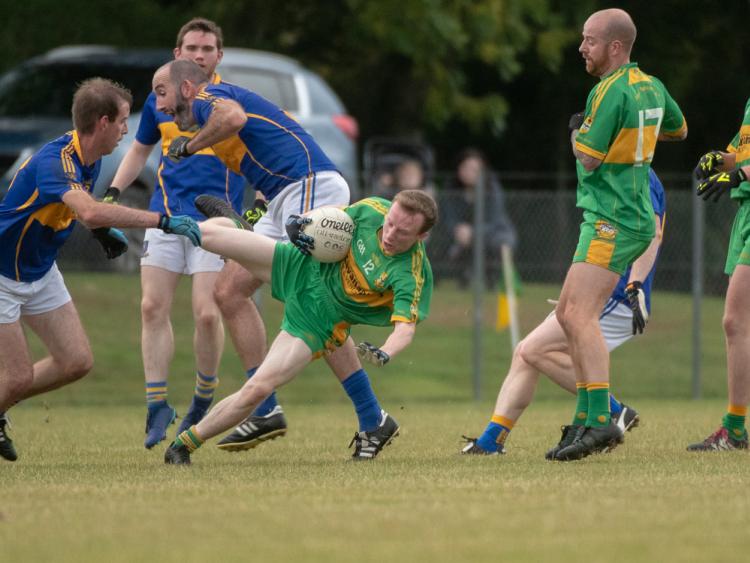 Both Park Ratheniska and O’Dempsey's will harbour ideas of going all the way in this year’s Junior Football Championship, but based on last Friday night’s display it will be the men in green and yellow who look to be the ones more likely to be in the race to join the intermediate ranks.

The low-scoring in the first half can be somewhat attributed to the very greasy conditions in Park Ratheniska, following a downpour prior to throw in. However, the weather can’t be at fault for all the poor play, particularly in front of goal in the first period.

O’Dempsey's missed a gilt-edged opportunity to raise a green flag in the 21st minute when Eugene Nolan steered wide from 10 yards out, and to compound their misery, a minute later Park-Ratheniska had the ball in the back of the O’Dempsey's net.

Jimmy Langton showed a burst of pace to draw in the O’Dempsey's defence, before setting up Sean Tynan, who duly dispatched from close range. The goal, which was the only real moment of quality throughout the first half, saw Park go to the break 1-2 to 0-2 to the good.

Park-Ratheniska were quickest out of the blocks in the second period as they hit four unanswered points in the first seven minutes after the restart, a Kieran Delaney solo effort from 30 yards the pick of these as the home side started to exert their dominance.

O’Dempsey's sprung back into action on the 40th minute and hit a hat-trick of unanswered points, all coming from the boot of Eugene Nolan, through a mixture of placed balls and open play to keep his side in touch.

Park-Ratheniska's introduction of Stephen Knowles early in the second period would prove pivotal, as he scored two points following his introduction from the bench in the 49th minute and gave his side a 1-8 to 0-6 lead heading into the final ten minutes.

O’Dempsey's were now beginning to feel the pinch, and the wayward shooting of the first period re-appeared in the closing stages as the away side began to run out of ideas and struggled to clear their lines. Two further scores from Knowles along with points from Sean Tynan and Darragh Nolan in the final eight minutes saw Park-Ratheniska home with plenty to spare on a final score line of 1-12 to 0-8.