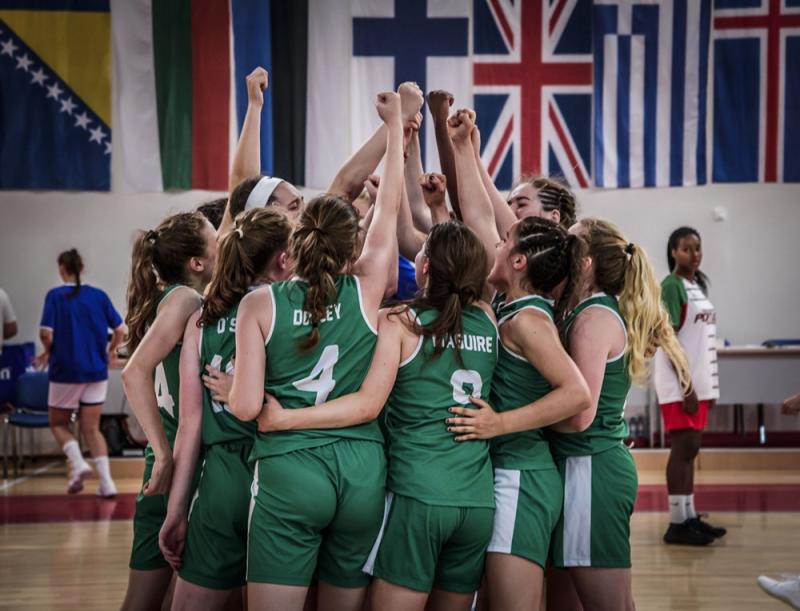 Three Portlaoise Panther basketball players were part of an Irish team that saw of Great Britain in a historic win at the European Basketball Championships.

Ciara Byrne, Gillian Wheeler and Shauna Dooley lined out in Green for the Ireland Under 16 Women who defeated a pacey and determined Great Britain, 58-66, in Classification 13-16 at the FIBA U16 Women’s European Championship, Division B in Podgorica, Montenegro.

All three Portlaoise club players saw action with Ciara featuring as one of the top scorers with 15 points. She scored three of four three point attempts.

The first quarter started out at a slow pace as both teams struggled to find their rhythm. Kate Hickey and Fatimah Akorede made early baskets for the girls in green as they kept up with the fast pace of Great Britain. Hickey had an excellent first quarter, scoring and rebounding, as Great Britain led, 12-11, at the end of the first.

Ireland began to frustrate Great Britain on defence as they secured steals and blocks, however, Ireland began to make mistakes on offence also, allowing Great Britain to score repeatedly. Ireland went ahead late in the second quarter with help from Hickey and Ciara Byrne but Great Britain scored two free-throws at the end of the half to have the sides level, going into halftime, 24-24.

The lead changed hands multiple times in the third quarter. Great Britain utilised their fast pace to take advantage of Ireland on the fast break. Ireland out-rebounded Great Britain on the offensive boards which got some well-needed points for Karl Kilbride’s side, as they had the lead, 40-43, heading into the final quarter.

Ciara Byrne and Kate Hickey stepped up early in the fourth to give their side the lead. Great Britain continued to fight back and brought the score level, until Akorede scored a massive three for Ireland to extend Ireland’s lead. Siofra O’Shea and Byrne extended the lead even further as Ireland ran out winners, 58-66.

No other club has more than one player on the panel. Ciara and Shauna are students of the hugely successful Scoil Chríost Rí team. Gillian attends the Cross & Passion College in Kilcullen.

Ireland will play the winners of Slovakia v Switzerland, which is currently being played, tomorrow at 12:45pm.