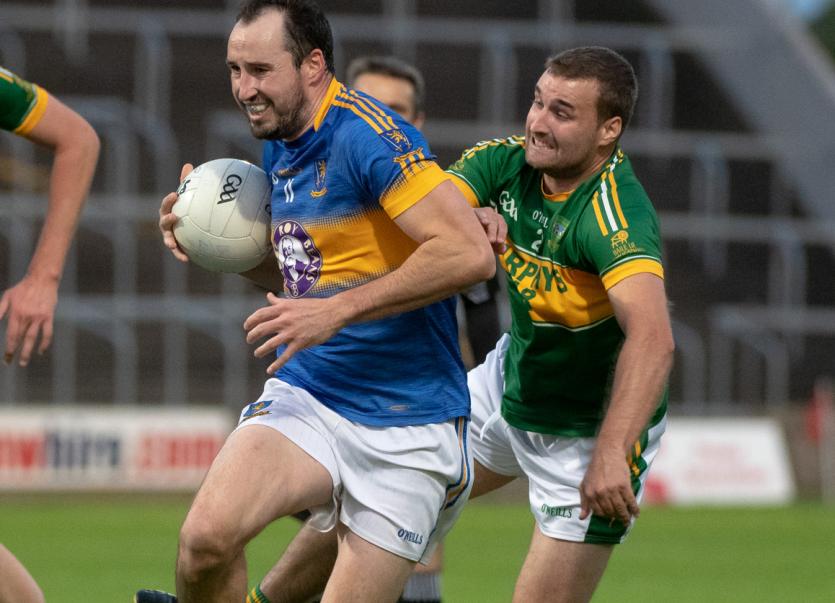 Ballylinan produced their best performance of the year so far, as they came within inches of knocking out Division 1A league winners O’Dempsey’s. Matthew Finlay managed to hold his nerve to slot over a last minute free though, as both sides will do battle once more on Wednesday night.

Ballylinan got off to a terrific start, as they hit three unanswered points in the first four minutes, showing no signs of any early nerves. Gary Walsh, Alan Farrell and Liam Kealy all raised white flags, but O’Dempsey’s replied strongly.

Michael Finlay got them up and running, before big full forward Daniel McCormack made his presence known with a fantastic goal. He picked up the ball with his back to goal, showed a surprising turn of pace to leave Cathal Leonard in his wake, and confidently finished past Aidan Walsh.

Mark Barry added another through a placed ball, before Jamie Farrell, who had a solid game, split the posts for Ballylinan. Michael Finlay went one better down the other end though, as he curled one over with the outside of his boot.

Ciaran Fennessy nearly grabbed a Ballylinan goal, but his shot was pushed away by Padraig Bannon and onto the post. Gary Walsh expertly landed the resulting ’45, before Ballylinan did get their goal.

Gary Walsh forced Padraig Bannon into action once again, as he saved well the first time. Walsh then saw his second shot blocked by the O’Dempsey’s backs, before he picked up the rebound once more, but cleverly fed Ciaran Farrell, who found the roof of the net.

O’Dempsey’s now trailed, but they finished the half the better team. Eoin and Matthew Finlay (free) leveled matters, before Gary Walsh replied with a free. However, Matthew Finlay struck over four points without reply before the break, as O’Dempsey’s led by two.

Liam Kealy and Matthew Finlay swapped points after the interval, as a Peter O’Leary injury held up proceedings for a couple of minutes. When play resumed, Ballylinan managed to get themselves back on level terms. With O’Leary now taken off, O’Dempsey’s struggled to contain Walsh, as he found the target twice in quick succession.

Matthew Finlay put his side back in front, before Padraig Bannon once again came to O’Dempsey’s rescue, as he deflected Alan Farrell’s rasping shot off onto the post. Gary Walsh put over his fifth free of the night, but O’Dempsey’s kept themselves on the front foot through Mark Barry and Matthew Finlay (free) points.

Ballylinan hit a purple patch just when they needed to though, as they looked to have done enough to secure a surprise victory with four unanswered points. Gary Walsh struck over two frees to level the game for the fifth time, but they kicked on this time. The two Farrell’s, Alan and Ciaran raised white flags, as the Ballylinan faithful in the stand found their voices.

O’Dempsey’s showed character in abundance in injury-time though, as their main man Matthew Finlay stood tall for them in front of the posts. The first of his two points could’ve been avoided from Ballylinan’s perspective, as goalkeeper Aidan Walsh and his full back Cathal Leonard seemed to get in each other’s way, punching over the crossbar. Finlay once again held his nerve to bring this exhilarating affair into another game.