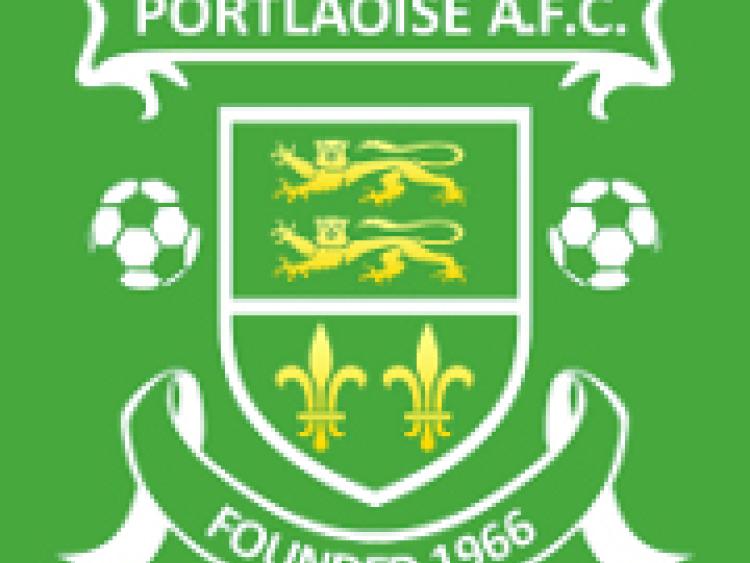 Rossleighen Park saw the first game of a newly structured u-15 Midlands East division, where Mountmellick were the visitors on a bright Saturday morning.

Portlaoise AFC's team saw big changes from last season, and they were also missing three players too, so a nervy start was played out for the first ten minutes or so.

There were a couple of chances after sustained pressure from Portlaoise around the edge of the box, with Jamie Toman and debutant Cian Moore troubling Mountmellick. TJ Delaney and Ben Dwyer were also linking up well on the right and starting to find each others as the clock progressed. Ben Dwyer was pulling off some lovely touches of control. Eight minutes in and a lovely ball in from the left wing from Robbie Farrell resulted in Cian Moore being unlucky not to find the target with a nice header.

Ben McDonald beat two Mountmellick players on the right wing two minutes later and fired a ball into the box. Kanye Tshula saw his effort well blocked but Jamie Toman picked up the loose ball, and fired it past the keepers left side. 1-0 to the home side.

Twenty-three minutes in and Kieron Whelan tidied up at the back with Kieran O’Donnell's help, and moved the ball up the field to Jamie Toman on the edge of the box. The forwarded ball allowed Thomas Swords to shoot, but he pulled his shot fractionally wide of the left post. Portlaoise should have been out of sight at this point.

Twenty-eight minutes gone and Jamie Toman struck again. The Mountmellick defender tried to slide out to block the shot but couldn’t do enough to divert it away and in it went.

Around the half hour mark, Portlaoise AFC keeper Lee Smyth passed it to TJ Delaney at the back and he played the ball through the Mountmellick back line. Jamie Toman received the ball around the penalty spot and beat the keeper at the second attempt for his hat-rick. A couple of minute passed, and Cian Moore’s corner saw Robbie Farrell improvise on the line to turn it into the goal off his right leg.

The second half saw a similar patter emerge, with Portlaoise not allowing Mountmellick any room to breathe. Two minutes into the half and Ben McDonald got the goal his game deserved, as Robbie Farrell set him up and McDonald finished really well from the right corner of the box.

Straight from the kick off, Portlaoise retrieved possession, and another  Cian Moore corner resulted in Robbie Farrell sticking it away again from close distance to make it 6-0. Just after that Thomas Swords has a fine shot go just outside the right post, but seconds later it was 7-0. Farrell grabbed the second Portlaoise hat-trick and McDonald a minute later set up Cian Moore for his debut goal.

Approching the hour mark, Portlaoise scored their ninth. Cian Moore manoevred room for himself on the left, beating two players and then firing at the keeper from a distance. The keeper was unable to hold onto it, and Moore had his second goal.

However, Mountmellick, to their credit, grabbed a consolation goal when Lee Smyth was beaten at the second attempt. A quick response from Portlaoise saw them hit double figures, as McDonald scored his second to make it 10-1.

Kieran O’Donnell scored a peach of a free from about twenty-five yards out to put the icing on the cake, in what was a fine Portlaoise team display. There were also some fine debuts for Cian Moore, Ryan Mitchell and Thomas Swords. Ben McDonald and hat-trick scorer Jamie Toman had strong games, but they were just pipped to Man Of The Match by Robbie Farrell, who was solid throughout and also bagged a hat trick.