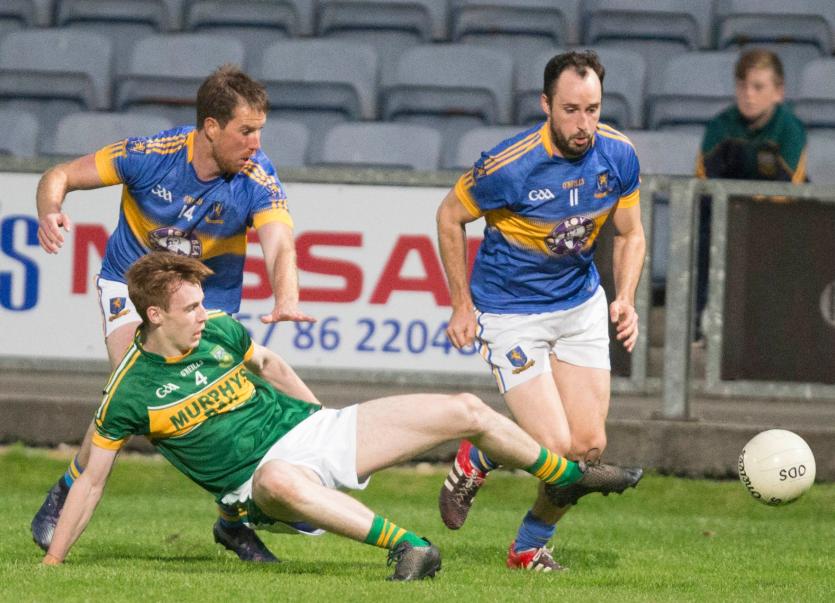 In a thrilling finale where extra-time looked on the cards, O’Dempsey’s managed to stave off Ballylinan’s spirited comeback and advance through to the quarter-final stage for the second year running.

Ballylinan began the game on the attack, but wasted two chances, and O’Dempsey’s made them pay. Matthew Finlay, who came off the back of shooting ten points in the drawn encounter, went through to score a goal. Strong running from midfielder Barry Kelly resulted in Finlay going clean through, and although his first attempt was saved by Aidan Walsh, he made no mistake with the rebound.

Two minutes later, things got even better for the Killenard men. Michael Finlay was taken down in the square, and the ever reliable Conor Meredith dispatched duly for O’Dempsey’s second goal with only three minutes elapsed.

Gary Walsh (free) opened Ballylinan’s account for the night, but Matthew Finlay also struck over a free down the other end. The Ballylinan defence was all over the place, and O’Dempsey’s nearly grabbed a third goal, but Michael Finlay’s shot was blocked off the line.

Matthew Finlay converted a ’45, before Ballylinan began to get into it, with Seamus Lacey pointing first, before Jamie Farrell placed over a beauty from distance.

Matthew Finlay and Mark Barry both kicked nice scores, before a few minutes later Barry bore down on the Ballylinan goal once again, only to see his shot trail to the left and wide.

Gary Walsh landed his second free soon after, but Mark Barry and Barry Kelly both kicked excellent scores to widen the margin once more. Two Gary Walsh points from placed balls ended the half on a positive note for Ballylinan, but they had a serious amount of work to do to overturn the two-goal deficit at half-time.

They could’ve done with a quick start, but it was O’Dempsey’s who came galloping out of the blocks. Shane Nerney rampaged forward at the beginning of the half to fire between the sticks, and Matthew Finlay converted a free a minute later. Conor Meredith then caught Aidan Walsh’s kick-out and kicked a sweet ball into Matthew Finlay, who unselfishly laid it off to Michael Finlay to place over.

Ballylinan managed to keep plugging away though, as Gary Walsh kept them in the contest with two more points from placed balls. Finlay and Walsh exchanged scores from frees twice, before Walsh landed an extra one to leave the gap with what it was at the interval, two goals.

The Ballylinan crowd could sense O’Dempsey’s beginning to fatigue, as Walsh kicked another free with seven minutes of normal time left on the clock. Walsh went looking for more then, as he turned Peter O’Leary nicely, but his finish was blasted wide.

Teenager Mark Barry then took responsibility for O’Dempsey’s when they were calling out for it, as he played a give and go with Michael Finlay, and ran nearly half the field to put the six point cushion back in place.

It looked like O’Dempsey’s could see the finish line, but then Andy McEvoy snuck in for a goal, after he tapped in the rebound from Gary Walsh’s powerful effort. Richie Ryan and Gary Walsh cut the gap to the minimum, but O’Dempsey’s unconvincingly held on.