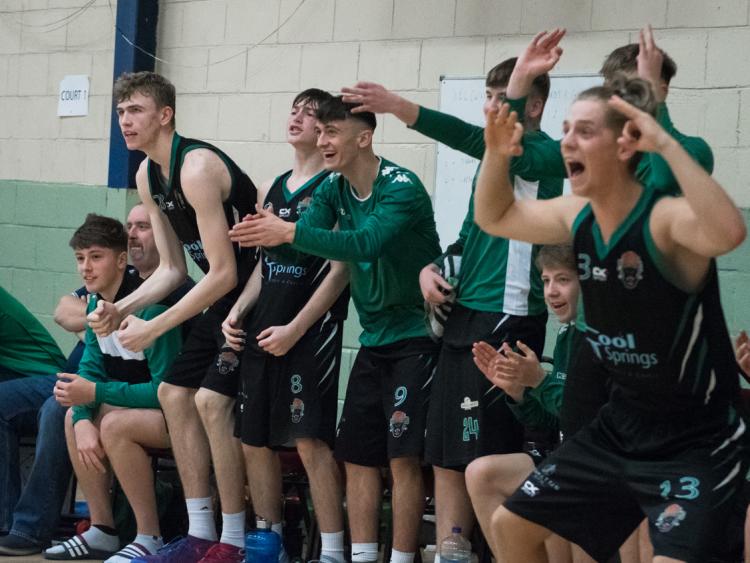 Portlaoise Panthers lost out to St Paul's from Killarney at the weekend.

Portlaoise Panthers young cubs are on a steep learning curve just now as they fell to a third defeat on the bounce after a 77-94 home defeat to a fancied St Pauls Killarney side on Saturday night in a jam-packed St Marys Hall.

St Pauls brought their powerhouse team to Portlaoise fully intent on keeping their 100% winning record intact and they did so with an accomplished performance throughout.

Basketball is on a high in Ireland at the moment and especially in Kerry where huge crowds attend the home games of Killarney, Killorglin and Kieran Donaghy’s Tralee.

This exciting Portlaoise team will be disappointed on the one hand but they have endured a really difficult spell losing away to Fr Mathews, at home to Carlow IT and again at home to Killarney this past weekend. These are three of the more difficult fixtures on the calendar and the young Panthers were very competitive in all three games.

Viewed in the cold light of day, this can be seen as a huge positive because aside from short spells in these games Portlaoise were well able to match the best of what these teams threw at them.

The upside potential is enormous and once these young mavericks learn from their mistakes going forward, Portlaoise will be a very much feared opponent very soon. The team and management are gelling well and the local basketball fans can see what’s coming down the tracks after this development phase.

Mason and O'Brien opened the scoring for Killarney after a couple of fumbles on offense by Portlaoise and Mike Pierre got Panthers on the scoreboard with a driving lay-up. Papito really punished Portlaoise in the opening quarter as he was left open to hit a number of long-range threes.

Then as Panthers scrambled to close him down from the outside, he turned his attention inside and used his massive 6’8 frame to dominate inside the paint with a couple of power dribble lay-ups. Pierre kept Portlaoise hot on their tails throughout and drained a number of shots.

Panthers captain entered from the bench and contributed five points on the trot. The scoreline was 21-23 to the visitors after a blistering opening quarter.

Pierre and Mantas Vilimas kept Panthers rolling in the second combining their spectacular array of scoring skills. Vilimas’ incredible footwork caused problems all night long for Killarney and they had no answer for him.

Killarney's own dynamic duo of O'Brien and Papito responded with interest. Papito continued to punish Panthers as his hot hand knocked down another three long range missiles and O'Brien attacked relentlessly from all angles of the hardwood.

Gary Morrissey and Trevor Swayne, 16 and 17 respectively began to show what they could do as the game neared half time with some brilliant scoring. Sean Condon is blossoming into a fine post player and finished with a couple of strong putbacks to keep Portlaoise in the game, trailing 41-46 at the break.

The normal third quarter flurry abandoned Portlaoise at the restart though as Killarney threw a wrinkle at Portlaoise with a zone defense and Portlaoise flustered and fumbled offensively allowing the Kerrymen to streak away in the quarter.

Portlaoise heads dropped far too quickly and by the time they recovered the game was already beyond them. It is at moments like these that Portlaoise have to learn to be patient and trust their system and dig deep both defensively and away from the ball offensively if they are to make the leap forward as a team.

These experiences will add some steel to one of the most talented young cores in the country and once they match that steel and flair with some guile they will be a serious contender for honours. Killarney opened up a lead of 75-53 by the end of the third period.

A final quarter flurry from Portlaoise wasn’t enough to reel in Killarney but at least it offered some encouragement for the enthusiastic home support. The game ended 77-94 with the spoils heading southward to the Kingdom.

Portlaoise will learn from these tough defeats though and look to get back on track next week with a trip to Waterford IT. Waterford are very young too though and they will be itching for a first win of the season to progress their journey.

A wily Mick Evans will have targeted this game vs Portlaoise for his young charges at the start of the season as a winnable game and the Panthers will have to be ready for battle.

Portlaoise move to a 2-3 win loss record which leaves them mid table but they will be looking to bounce back over the coming weeks. A lot of work is going on in the background and Panthers are not very far away from these far more experienced league powerhouses like Carlow, Killarney & Ballincollig.

They have a two week break shortly which they plan to use wisely and hope to emerge refreshed for the next phase of games. Rian O'Connell and Pierce Bolger Hinds are close to return from injury and James Phelan has begun to emerge also in recent weeks. So the future looks bright.