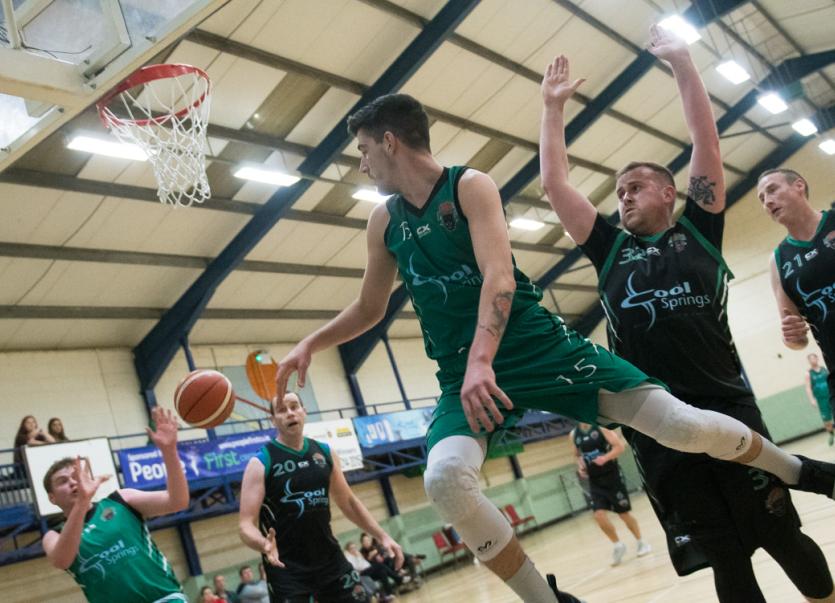 Kyle Burke makes this pass to Jack Scully for a chance at the basket in St Mary's Hall on Friday night Picture: Denis Byrne.

Panthers White started the better of the teams with Noel O'Hara draining a couple of long jump shots and Ger Egan finishing strong at the board after a wonderful pace from Rody McEvoy.

The Panthers Black were not going to let their opponents have it all their own way, and Mantas Vilimas was causing all sorts of problems on the offence, first nailing a long three pointer and then linking with Jack Scully who finished a fantastic move at the basket.

Baskets were few and far between in the first quarter, but David Keane was able to open up the defence of the Panthers Black with a couple of excellent move. Panthers Black were always very dangerous on the break with Kyle Burke and Evan Maher racing up and down the floor.

Panthers White ending the quarter the same way they started with O’ Hara punishing the opposition for leaving him open.

The second quarter was a much more open, with both teams bring in fresh legs of the bench. Christopher Higgins and Peter O'Sullivan came in for the Panthers Black and they spaced out the floor for their team, this lead to another three point score for Vilimas.

The Panther White team didn’t slow down with Keane and Sean O'Neill finishing off a couple of fast breaks. Anthony Dunne and Egan worked tirelessly inside for their team pulling rebound after rebound, this was vital as it didn’t allow the Panthers Black any second chances.

Peter Duignan was able to capitalise on the bit of space he was given and hit a long range shot and Scully was able to add to his tally to close the gap between the two teams before the first half ended. Panthers White lead by three points at the break.

Jack Dooley re-entered the game for the Panthers Black and made an instant impact for his team, assist Vilimas twice and making a strong move for his own score. But the Panthers White were not going to allow their opponents back into the game, both Egan and Dudek getting a brace of baskets apiece. The Panthers White led the game going into the final quarter by ten points.

Both teams came out in the last quarter and exchanged early baskets. Vilimas and Duignan hitting three points for the Panthers Black, while O’ Hara scored twice to maintain the lead for his team. As time was ticking away and the lead was still being preserved, Panthers Black put more pressure on the ball.

This led them to closing the gap, Dooley and Burke working inside and getting numerous opportunities. Free throws turned out to be vital for the Panthers White, with them scoring ten free throws in the final few minutes.

Panthers Black never gave up and kept competing right up till the end, but it was their night. It was an excellent start for the Panthers White, with a nine point victory over a very strong opposition.