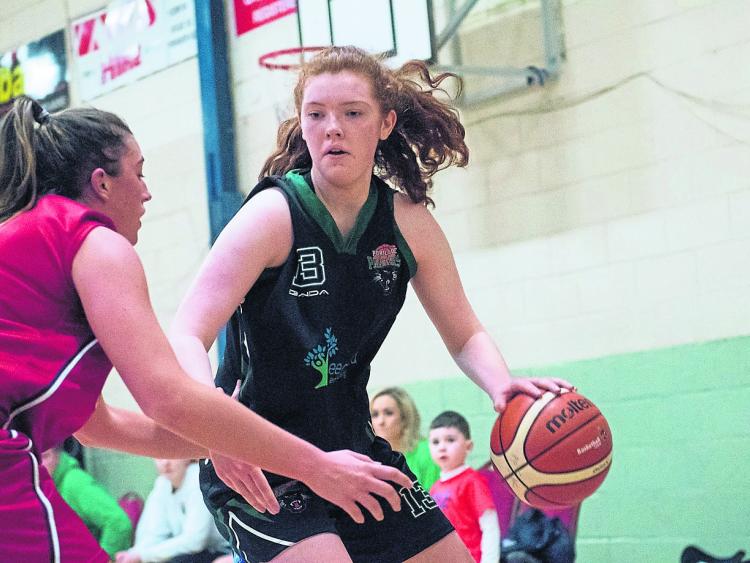 Claire Melia in action for Portlaoise.

The Portlaoise Panthers women’s national league team made it two wins from two after defeating a tough Limerick Celtics team on the road last Saturday.

This was always going to be an intriguing contest as both teams got off to a winning start the week previous. Limerick Celtics got off to a quicker start with Americans Taylor Williams and Frannie Frazier getting some early baskets.

It was Portlaoise captain Catherine Ashe who settled them down with a big three pointer. Portlaoise started to take control in the middle of the first quarter as they relentlessly ran the floor as Maeve Cahillane and Sinead Melia converted some fast break scores.

Claire Melia was as always proving a handful for Limerick as she began to dominate inside the key converting a few baskets of her own. Celtic's Frazier was proving to be a very tough opponent as she kept her sides scores ticking over. Portlaoise led 20-14 at the end of the first.

The second quarter was a very mixed affair. Portlaoise adapted a triangle and two defence to try and limit Frazier and Williams. This worked extremely well as Jamie Sherburne and Sinead Melia were tenacious on defence which left Celtics with limited opportunities on offense.

Ciara Byrne and Shauna Dooley showed their youth as energy levels never let up. Ciara Byrne picked off some scores of her own and Sherburne scored the next five points. Unfortunately, Cahillane had to leave the game with injury for Portlaoise and the scoring began to dry up as they failed to convert some great chances.

Celtics maintained a few steady baskets but Portlaoise still maintained the lead at half time on a score line of 35-30. The third quarter proved to be the winning of the game as Portlaoise stepped up a gear. Their defence was brilliant and as they ran the floor, Celtics began to fatigue early forcing them to foul on numerous occasions.

Sharon Melia and Ashe closed out the key on defence and forced Celtics to turn the ball over on many occasions. Ashe, Sherburne and Byrne were scoring time and time again which began to open up for Claire Melia inside.

She was continuously being sent to the free throw line which she gladly converted. From this point on, Portlaoise never looked back.

The fourth quarter remained like the third as Portlaoise had total control. The mix of youth and experience is vital in times like these and the strength in the squad was evident in the final few minutes.

Gillian Wheeler got her first taste of national league basketball and it was great to see Deirdre Tomlinson return to the squad. Portlaoise ran out winners on a score line of 71-54.

The next home game is this Saturday evening at 7:30pm against the University of Limerick and is sure to be good contest. Get down and support the girls and let’s keep the winning streak going.