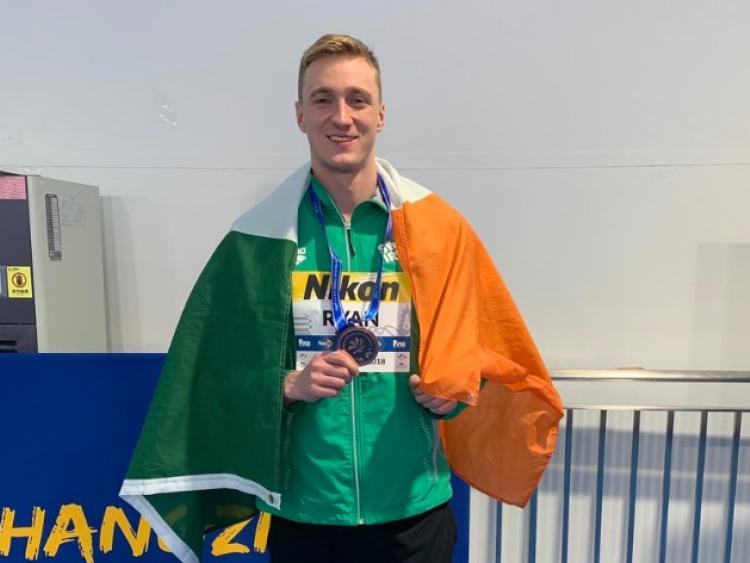 Shane Ryan with his medal in China.

Shane Ryan has been unable to repeat his historic medal-winning swim at the World Championships in China but he has set more new records.

The Irish American, who has strong Portarlington roots, clocked new Irish record of 46.93 seconds, in the semi-final of the men’s 100m freestyle at the World Short Course Championships in Hanghzou. He was 9th out of 16 semi-finalists.

Ryan exceeded expectations by making the semi as he was in an unseeded heat which he won.

Ahead of the 100m Freestyle swim Ryan was part of the Ireland men’s 4x50m Medley Team that set another Irish Record. Ryan, with Conor Ferguson, Darragh Greene and Brendan Hyland were impressive in the second heat touching in 1:35.05, knocking .58 off the record set at the 2017 European Championships.

The time left the team in 10th place overall and confident going into the 4x100m version of the event tomorrow where they will look to break a longstanding Irish Record of 3:45.66 set in 2001 by a team that included Olympians Adrian O’Connor and Gary O’Toole.

Shane won a bronze medal in the 50m backstroke on Friday. He set a number of new Irish records on the path to winning Ireland's first ever World Championship swimming medal.

He is looking forward to returning to basing himself in Ireland in the run-up to the Tokyo Olympics.

He spent time with relatives in Portarlington, the hometown of his father Tom, in the run-up to the Rio Olympics.