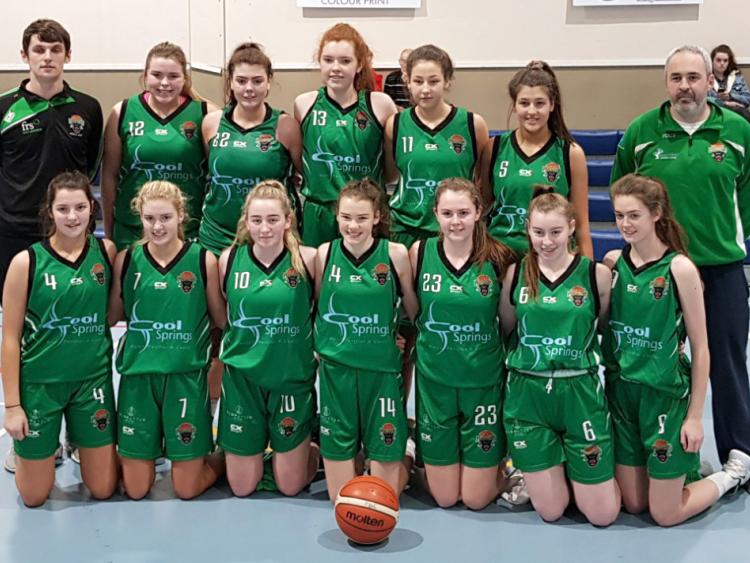 The Portlaoise U-20 team.

The Portlaoise U-20 ladies team travelled to Cork on Saturday last to take on an excellent team from Liffey Celtics in the National Cup semi-final.

Having recently lost out to the same side in the quarter final stages of the U-18 competition the girls were well up for this game. A superb performance was needed and the girls did not disappoint. The coaching tactics were pretty perfect and the girls delivered on the court.

The games opened with a massive three pointer from Claire Melia but the Kildare side responded with two quick baskets to take a one point lead after two minutes. The occasion got to the girls in the early stages and they were slow to settle on offence making some uncharacteristic turnovers.

The girls then started to play their own game Melia picked up a steal inside the opponents three point line to set up Ciara Byrne for a fast break opportunity. Liffey Celtic applied a full court press which the girls easily broke down and Shauna Dooley found Byrne at the end of a fast break for two more points just before Liffey added another three pointer.

Gillian Wheeler who was immense on defence collected two brilliant offensive rebounds and was unlucky not to capitalise. A small lapse on defence allowed Celtics in for an easy basket from an offensive rebound. The Portlaoise girls found themselves trailing by seven points with three minutes left in the first. A brilliant hustle by Ciara Byrne set up Sarah Fleming for a well needed jumper from outside the arc.

A give-and-go from Byrne to Dooley put Dooley on the line for two shots and she made both reducing the deficit to just two before Liffey added two more. Amy Byrne replaced Fleming who made an instant impact with some brilliant defence before a shot block from Melia stopped a certain basket. This lifted the girls at the end of the quarter and they were taking a four point deficit into the second quarter.

Lisa Blaney came in at the start of the quarter for Wheeler who had put in a brilliant first quarter display. Melia collected a defensive rebound and ran the floor finishing with a brilliant basket and was unlucky not to be given a bonus shot. Celtics had a run of five consecutive points to stretch the lead back out to seven before Melia added two more from an offensive rebound.

Dooley applied super pressure on defence to force a Liffey turnover before Blaney hit a much needed three-pointer. Celtics were getting all the play and were capitalising leaving the Portlaoise girls trailing by nine points half way through the quarter.

A time out at the stage helped to refocus the girls and Blaney picked up a great steal and finished the break before some brilliant team work on defence forced a travel call. Another score was badly needed and a patiently worked offense resulted in Fleming finishing under the board before Melia hit a massive three to bring the game back to just two points.

The girls then levelled the game back up after Blaney finished a super fast break with a brilliant pass from Byrne. An excellent one-two from Melia to Wheeler put Gillian on the line for two where she made one and gave the girls the lead again for the first time since the opening seconds with just one minute remaining in the quarter.

The girls stretched their lead to three after Jasmine Burke showed great vision to pick out Wheeler under the board. This was a brilliant run from the girls scoring twelve unanswered points. Liffey however reduced the margin to just one point again picking up the final score of the quarter. The game was in the balance at half time with Portlaoise side leading 31-30.

This was always going to be a battle and all was to play for in the third quarter. The girls needed to settle straight into the game and Dooley ensured this picking up the opening score of the half after a good offence. The Kildare side responded with a big three to bring the game back level.

Fleming nailed her second three of the game and it was well and truly game on. It was becoming a battle of the shooters. We were level again just three minutes into the quarter before a free throw gave Liffey the lead again. A steal by Ciara Byrne opened up the floor for a lay-up before Liffey hit another three and then Byrne levelled things up again with a drive through the centre of the defence.

Melia again showing her experience on the floor picked up another block her third of the game, setting up Fleming who was playing an excellent game for another two points. Celtics then made another outside shot their three pointers were flying in. Melia drew a foul and duly made the two before she added a massive three pointer to counteract yet another from the Kildare side. Melia rebounded her own shot to add two more points.

It was end to end basketball with both teams firing from all cylinders. A great spectacle for the spectators but a nervous time for the players and coaches. The Kildare side held the narrowest of margins with one minute left to play in the quarter.

Melia again added two more points before Liffey finished the scoring of the quarter with a long range shot. The girls needed to give everything in the final ten minutes to pull back the three point deficit. Liffey held a lead of 54-51 going into the last.

Fleming opened the scoring of the half with an off balance baseline shot to reduce the deficit to the minimum. Liffey brought their lead back out to five after making a free throw and hitting their eleventh three pointer of the game.

There was still seven minutes to play and only two scores separating the sides. Fleming was then put on the line after been fouled on her way to the board. She made one to leave four points in it. A shot clock violation against Celtics gave Portlaoise the opportunity to claim two more points and Burke finished under the board after a brilliant post move. Melia added the two points needed to level the game back up with five minutes to play.

Fleming finished a brilliant offense to reclaim the lead. Burke drew a foul after a brilliant drive to the board and made the two free throws to stretch the lead to four with just over four minutes remaining. Fleming responded to a Celtics baskets with a huge three pointer before Byrne added the girls eight three pointer to bring the lead to eight.

This could prove to be the pivotal point of the game but there was still a long way to go. With just two minutes on the clock Liffey made a massive three to reduce the deficit to just five. Melia then showed her leadership and experience again to add a three point play after been fouled on a drive to the board. A controversial call gave Liffey the chance to hit their thirteenth three of the game and we were back to a five point game.

The Kildare side were now on team fouls and they put Byrne to the line followed by Melia who made two and we were back to seven points and just one minute left to play. Twenty five seconds left to play and another made free throw put the game out of sight. The girls were on their way to the National Cup final in two weeks’ time.

This was a brilliant team performance with every girl making an impact as they entered the game. Defensive displays were second to none and although Celtics made 13 three pointers their main shooting threats were kept completely out of the game.

A tough battle lies ahead in the final against DCU but it’s a game the girls and their coaches will look forward to and feel that they every chance of bringing the title home.