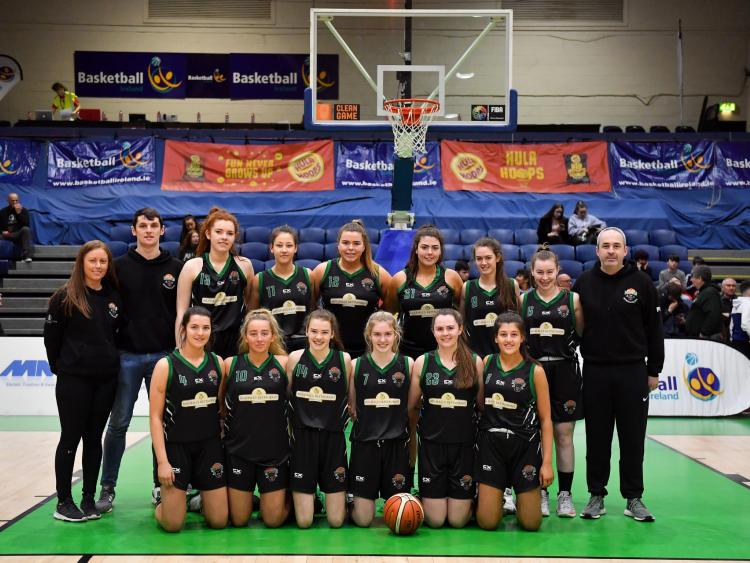 The Portlaoise Panhters U-20 girls travelled to the National Basketball Arena on Sunday last to play in the National Cup Final.

This is something any basketballer would be dreaming of since they picked up a ball at a young age. This was the first time the club had been represented at underage level at this stage of the competition. Our women’s National League team have in recent years won two of these prestigious titles.

Having defeated Liffey Celtics in the semi-final the girls were up against the reigning champions and it was always going to be a tough battle. The Dublin side also boasted a wealth of experience and numerous international players.

The game started very positively for the girls with Claire Melia picking up the opening score after a backdoor cut to the basket before Wheeler added up a well-executed three pointer.

Some excellent defensive play by Byrne and Dooley who was dominating under the boards defensively made it difficult for their opponents to score early on. DCU then began to settle into the game and responded with two baskets before Melia, Wheeler and Fleming left the Portlaoise girls 11-8 up at the end of the first.

The second quarter also started favourably for the Panthers girls as they extended their lead with a massive three pointer from Fleming followed by another Melia inside basket. DCU were hot favourites going into the game and up until this point were not getting it all their own way.

However they came back strong half way through the quarter taking the lead for the first time with scores from Rachel Huijsdens and Bronagh Power-Cassidy. The two international players were causing all of Portlaoises problems and their accuracy meant there was little for our girls to pick up under the boards.

Ciara Byrne ate back into the lead with a brilliant drive through the centre of the defence before Blaney picked up her first score after a great vision allowed her to intercept a pass and finish an open lay-up. Melia added to the final score of the half to leave just two points in the game at half time. 25-27 in favour of DCU.

Unfortunately it was in the third quarter that the game started to get away from the girls. Although they started the quarter with a three pointer from Dooley and another patiently worked offense allowed Wheeler in for an easy finish under the board.

Jasmine Burke made sure that the Dublin side were getting nothing easy inside the key but the dynamic duo of Huijsdens and Power- Cassidy was causing trouble for the Portlaoise side.

They were struggling to keep them at bay and their experience of playing at this level was evident at this stage notching up 50 points between them. Melia added two points at the end of the quarter to keep the girls within touching distance going into the final quarter.

The girls needed a huge last quarter to try and cut into the five point deficit they found themselves in. They made a good start with Wheeler making one of two free throws to bring the lead back to four early in the quarter.

However DCU continued to outscore the girls and held a 45-34 lead with just five minutes to play. A change in defensive tactics at this stage putting on a full court man to man press allowed the girls to pick up a few more baskets but it was too little too late as teams fouls put DCU to the line for free throws on a few occasions where they were clinical and held on for a ten point victory.

All twelve girls played a huge part in getting to this stage and each of them should be so proud of their achievements. This was a very young team with only two of the girls over age next year.

There are eight of the girls underage for the next three years with the other two boasting two more years in this age grade. The future is definitely bright for this young group of girls.