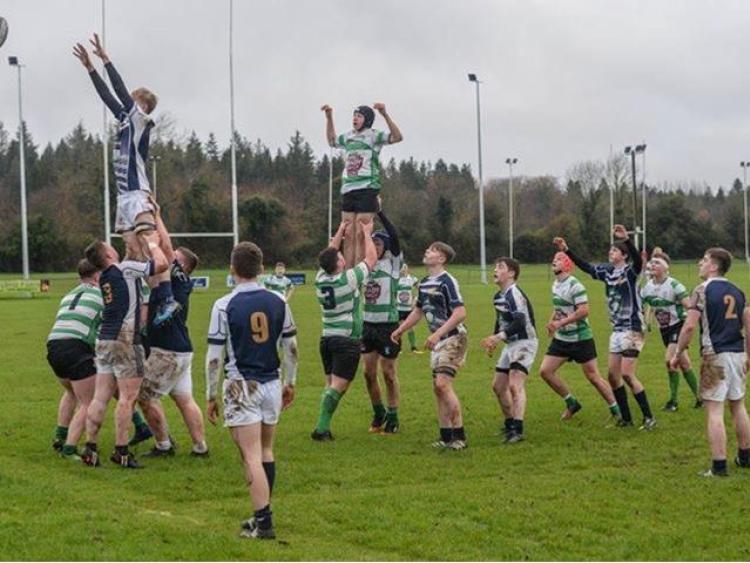 Action from the North Midlands U-18 final.

Portlaoise U-18s registered an impressive win in the North Midlands final against Naas in Athy on Saturday.

Unfortunately the conditions with regard to wind and rain weren’t conducive to open rugby, but to be fair this game was very entertaining between two very skilful teams.

Naas played with the benefit of the wind in the first half and ten minutes into the game they were awarded a penalty on the Portlaoise ten metre line, following an infringement at the ruck. Ireland U-18 international Jamie Osbourne slotted a terrific kick to put Naas on the scoreboard.

Such are the wafer-thin margins between these two teams in the past twelve months, Portlaoise looked the hungrier team on the day. It took three minutes for Portlaoise to respond thanks to a penalty from their captain William Reilly, after Naas failed to release at a ruck.

It was not long before he was lining up another kick at the posts after the Portlaoise pack muscled up to stretch the gap to seven points. Portlaoise hooker Ryan McEvoy threw into an attacking lineout and joined the driving maul. Naas offered stiff resistance but eventually buckled under the pressure to allow the impressive Fionn McWey cross the line to secure a try.

Naas’s Osbourne kicked another penalty following a similar infringement at the ruck by a Portlaoise player, to leave the score at 10-6.

Following some resolute defence from Portlaoise, particularly their outstanding backrow player Adrian Brzozowski, who comes straight from the old school of open side wing forwards, he terrorised the Naas half backs all day. The ball was turned over and following a well-placed box kick by Reilly, Naas had to clear their lines which resulted in an attacking lineout for Portlaoise inside the Naas 22.

The Laois lads executed the lineout successfully and Paddy Coss, who is doing the basic requirements of his tighthead role to the highest standards and is proving a force at the breakdown and in the loose, finished some fabulous Portlaoise forward play. Coss somehow forced his long arm free to dot down on the line. Reilly converted to leave the score at 17-6, which is how the first half finished.

At the start of the second half the centre partnership of Brian Dunne and Brandon Nolan came to the fore, and any defence preparing for them can forget best laid plans if Brian breaks the first tackle.

Brandon did exceptionally well to fight past several Naas players and was available when Brian turns inside with the offload, only to be stopped inside the Naas off and Portlaoise were awarded a scrum when Naas were adjudged to have spilled the ball in their attempt to rip the ball free from the tackle.

From the resulting scrum William Reilly picked from the base of the scrum and, in truth had a lot of work to do to score a brilliant individual try which left the Naas defenders in his wake. He followed up with the conversion, to leave the score at 24-6.

Portlaoise centre Brandon Nolan was shown a second yellow which resulted in a red card for pushing a player and the referee, to the amazement of all in the ground, sent him off.

To lose a player of the calibre of Nolan would have been a body blow to lesser teams, but the Portlaoise lads to their credit worked tirelessly for the last 28 minutes with 14 men. Nobody could argue but that it was an incredible collective effort.

The nine minutes after half-time when they were down to 14 players, just to scramble and work as hard as the players did to keep them out showed unbelievable character from men of their age, and each and every one of those players are a credit to their club and themselves.

It was bound to happen that a team with Naas’s ability would find openings against 14 men, and in the last eight minutes they scored two tries.

To single out any player would do an injustice to this team performance, the pack led by Adam Duffin with Alan Maher, Alex Boateng, Liam Óg Lynch and Tadhg Mullen supporting were immense. Allan Connolly controlled the game masterfully from out-half, well supported by Conor Hancock, Jay Buggy, Jordan Radcliffe and Leigh Doyle.

Next up for these lads is Enniscorthy away next Saturday in the Leinster Premier League.