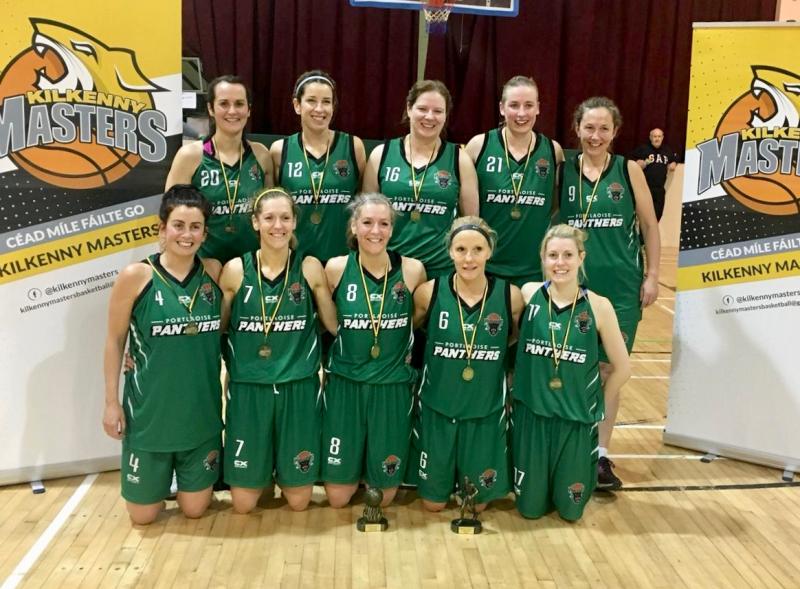 The Midland Ladies Masters basketball team travelled to Kilkenny on Saturday to compete in their first ever Masters tournament.
Nerves were at an all time on the short journey to the marble city as the girls headed into four matches almost back to back. Their glorious hosts Kilkenny Masters were extremely organised with efficiency in the running of the match timetable throughout the day.

The Midlands kicked off the debut Master tournament with a win against a tough Dublin side. The Midlanders had it all their own way in the first half as Dublin struggled to deal with the fast break.
All the girls linked up well throughout the half and led at the break 18-8. The second half saw Dublin find their feet and they started to eat into the Midlander’s lead.
Dublin won the next two quarters but the midland outfit had enough of a cushion to get them over the line and claim their first victory on a score line of 32-25 points.

The second game was an easier contest than the first as the girls came up against a depleted Tralee side, but the girls still had to get the job done and put the ball in the basket.
Again, the girls ran a fast break game and slotted home some lovely scores throughout the game. Ultimately, they had too much for the Tralee side to handle and The Midlander’s took the victory 35 points to 7 points.

The third game was played in a similar fashion. Cork had a full bench to work with and used it well throughout the game.
The first quarter was a tight affair as both side tried to make their mark in the game. The second quarter saw The Midlanders extend their lead and lead 22-8 at the half. The second half saw the home side put more and more pressure on Cork offence causing mistake and turnovers which the midland side punished and at the full time whistle the girls had taken their third victory 47-14.

When these two sides met in their last game of the day they were both unbeaten and neither wanted to finish the day with a loss. Both sides had tired bodies but fought from start to finish. Clare were the faster out of the blocks with two quick scores before the Midlander’s replied with one of their own.
The Midlanders started to make some uncharacteristic mistakes that Clare punished and at the half trailed 12-16 points. Scores came tit of tat in the second quarter with neither team going ahead by a point.
The Midlands stepped up their defence in the last quarter causing 3 turn overs from 24 second violations while on the offensive end three quick scores saw the Midlander’s continue their winning streak on a score line of 29-22.
With day one under their belt the ladies woke to a semi-final and possibly a final in their midst, with fatigue apparent from the previous days schedule they faced their opening Sunday game..

Having met already in the round robin stages of the weekend these two sides faced each other again in the master’s semi-final on Sunday morning.
The Midlander’s hit the ground running from the tip off and dominated the game on both ends of the floor. The midland team had the fresher legs of the two sides and pushed the ball on the break with all players putting in a great effort to see themselves into the final on a score line of 43-14.

The final was a tough battle from start to finish with the lead changing hands numerous times throughout. Dublin were strong under the boards at both ends and a lot of their scores came from second chances.
Midlands found it hard to break down the Dublin zone defence and with every score in the final quarter potentially the winning basket, Midlands finally found their range hitting some big shots down the stretch.
It was a low scoring final but the four point win was extremely satisfying for the Midland ladies as captain Pam Grogan picked up the winning trophy in their first ever tournament together. Deirdre Tomlinson played a big part in their unbeaten run and was awarded MVP for the final.