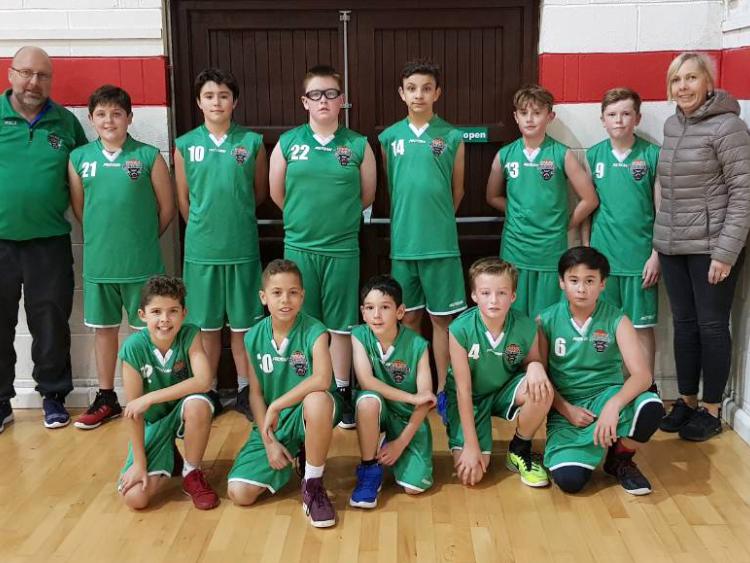 The Portlaoise Panthers U-12 boys basketball team travelled to Baltinglass last weekend to play the local club in the Kilkenny Area League.

This was the first game between these two teams this season as their original fixture before Christmas was postponed so the Panthers lads did not know what to expect and particularly as they travelled without some regular players due to other sporting commitments.

Panthers started the better with the first few baskets to settle them into the game from David Apopei and Luke Bowe after good passing from Oran Masterson. Sam Menendez and Riley Comerford controlled the pace of the game and kept the scoreboard ticking over with fine shooting to open up a 10 point lead.

The home club who appeared to get caught with the intensity of the game did eventually settle and went on to get a couple of good baskets of their own. As the quarter came to a close both teams were playing well, exchanging baskets with Panthers maintaining their lead thanks to scores from Luke Bowe and David Apopei.

The second quarter saw five new players from each club come to the floor. Portlaoise again started the better with two early baskets from Jack Fennell followed by a fine move inside to finish with an excellent score from Daniel Booth.
The Panthers lads were showing all the signs of a team playing with great confidence in their own ability as they ran the floor at every opportunity to finish strong to the basket with scores from Scott Davis and Thomas Major.

As the quarter went on they opened up a significant 18 point lead thanks to baskets from Jack Fennell and Fionn Stack.
The two big stats of this quarter was that Portlaoise put 18 points on the scoreboard while at the same time restricted the home team to 6 points. The second being that all five Panther players contributed with baskets.

As the half-time whistle approached, Portlaoise held a comfortable lead thanks to great work from Thomas Major and Daniel Booth.

The second half saw Portlaoise come out strong again pushing the pace as they ran the floor on transition, Sam Menendez and Oran Masterson were constantly pushing the ball which resulted in baskets from Luke Bowe and David Apopei. They were not only working well on the offensive end but also their defensive work rate has been second to none all season.

The Baltinglass team to their credit never gave up battling for every ball but they were given no time on the ball and were forced to take some poor shot and pass options as Portlaoise turned over the ball time after time with great work from Sam Menendez and Oran Masterson.

As the quarter went on the visiting team was getting stronger as they grew in confidence to open up a 25 point lead thanks to baskets from their Captain Riley Comerford and Luke Bowe after good work from David Apopei.

Baltinglass were rewarded for their own hard work with some good baskets of their own. The last two baskets of the quarter went to Luke Bowe in what was one of his best performance in a Panthers jersey to see him eventually top scorer of the game with an excellent 10 points.

The last quarter saw both teams relax with the final outcome of the game in little doubt, both teams were playing well, exchanging baskets, David Apopei and Fionn Stack put baskets on the scoreboard for the visiting team.

Baltinglass themselves went on to also get a couple of good baskets. Portlaoise slowed down the game and took the opportunity to go through their plays that would eventually see them with scores after good work from Jack Fennell and Scott Davis.

Portlaoise also continued to keep the defensive end tight as they worked hard through Daniel Booth and Thomas Major to restrict the scoring opportunities for the home team.

The Panthers lads went on to control the last few minutes of the game in what was a very good team performance as they went on to a well deserved win to see them win their second League title of the season.