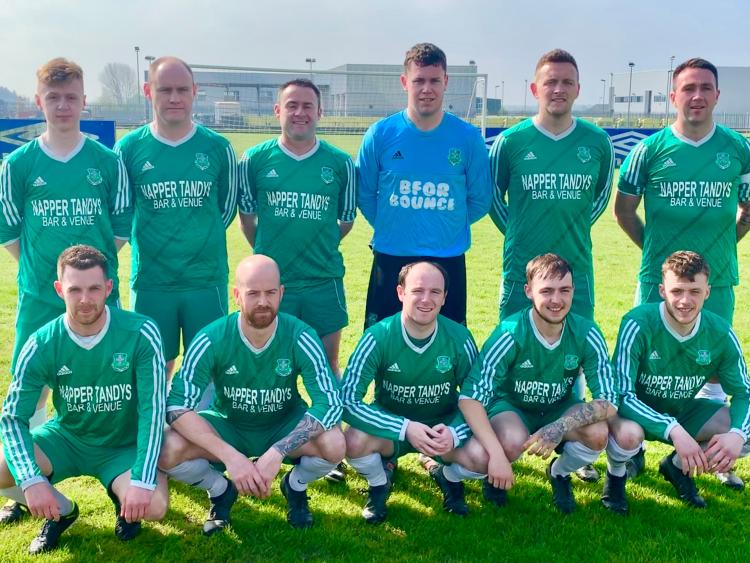 Terrific weather for football in Leah Victoria Park, Tullamore and it was Stradbally fastest out of the blocks on 3 minutes when Jimmy Langton broke down the right and crossed for Jody Dillon who trapped the ball and then laid off for Benny Lawlor who cooly finished from eight yards under the outstretched Moate Keeper.

Stradbally’s pace throughout the team was causing Moate all sorts of problems, especially down the right where Jimmy Langton was getting good joy against the Moate left full-back.

Moate’s first chance came on thirteen minutes when a 22 yard free-kick was well defended by the Stradbally wall. Stradbally doubled their lead on twenty-two minutes when Benny Lawlor was upended in the area, and Jody Dillon made no mistake from the penalty spot.

It was 3-0 on 27 minutes when a fine individual run from Benny Lawlor saw him cut down the left and eventually round the Moate Keeper for an easy finish.

Moate finished the half with a flourish and nearly had joy from a corner kick but Stradbally managed to clear, leaving the scoreline read 3-0 at the break.

Stradbally kept the foot on the pedal in the second half and went 4-0 up after fifty-six minutes when Langton and Dillon combined down the right again with the latter being set on goal to side-step two Moate defenders and slot low to the left hand side of the Moate net.

On seventy-one minutes Stradbally made added their fifth goal, again Jimmy Langton causing havoc down the right with his pace and this time he crossed home to his nephew, Jack Langton, who slotted home at the back post.

Stradbally were relentless at this stage and again Jimmy Langton was on hand when he chased down the Moate defence and pressed them into a mistake, winning the ball before unselfishly passing to Jake Byrne for the substitute to slot home to an empty net, making it 6-0 with seventy-six minutes on the clock.

That was the end of the scoring and Stradbally can now look forward to a Divisional Cup Final against Division 2 champions Gentex FC from Athlone in a clash that will pit the top two teams against each other.

Before that tough, Stradbally will have more Cup business to attend to in the form of a Counties Cup quarter-final against Division 1 side Horseleap United.