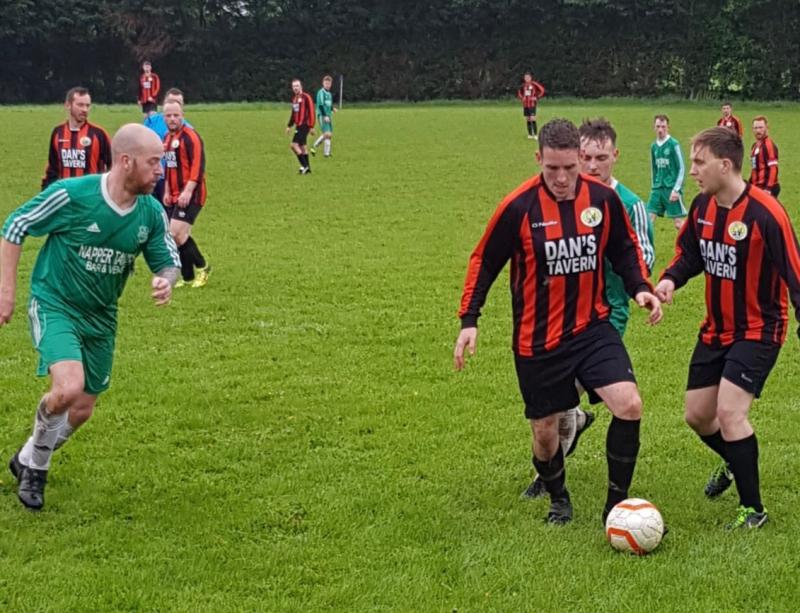 Action from the CCFL John FarrellCounties Cup qaurter-final between Stradbally Town and Horseleap United, with Stradbally advancing to the semi-finals on a 5-1 scoreline.

Horseleap played host to Stradbally Town on a damp wet day in the Quarter Finals of the Counties Cup making conditions slippery underfoot and tricky for both sides.

Stradbally started the smarter and were unlucky not to go ahead with a good Jack Langton effort crashing off the crossbar after good work from his Uncle Jimmy on the right.

Horseleap went ahead on twleve minutes totally against the run of play which kicked Stradbally into fifth gear. A fine finish from Benny Lalor on twenty-four minutes and followed swiftly by a Jody Dillon header seen the Laois men go in 2-1 up at the break.

Stradbally started off the second half the way they finished the first and Jody Dillon scored a fantastic second before finishing off his hat trick in the sixty-second minute with a fine finish.

Jack Langton finished off the scoring after some good work from Benny Lalor late on.

A great overall team performance from Stradbally Town who now look forward to another semi-final, most likely in two weeks time, but before that its Stradbally and Gentex next Sunday in the CCFL Division 2 Cup Final in Tullamore.

Best for Stradbally were Justin Lalor, Jack Langton and a five star performance from Jody Dillon.