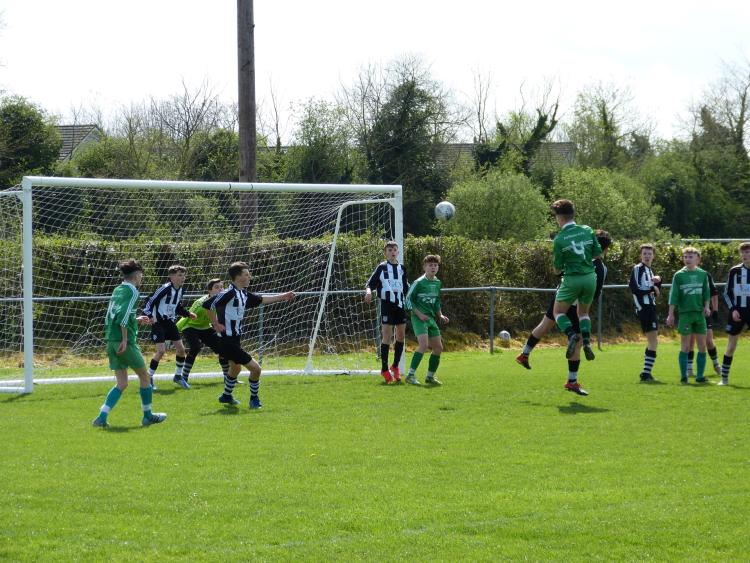 After having comfortably won the U-15 Major Division last week, it was time for Portlaoise AFC to put themselves up against Kildare side Kilcullen FC at Rossleighan.

Defeat against these opponents in the same competition in recent seasons meant it was an opportunity for AFC to measure their own progress and maybe even get some revenge on the scoresheet.

Straight from kick-off, the Kilcullen attacker played the ball back to his centre half but the ball went under his studs and lightning quick Jamie Toman got in behind him and slotted the ball past the keeper. Sideline stopwatches showed the goal netting around 6 seconds after tip off. Unbelievable start for AFC.

Robbie Farrell added a second from distance minutes later and the dream start was happening for Portlaoise. Nobody predicted a 2-0 start to the home side inside five minutes.

Cathal Lee produced a bit of magic on the left side to lob his defender and then curled a speculative outside of his foot shot from the left sideline forcing the keeper into a diving save to tip around the far right top corner.

Twenty-two minutes gone in a flash with most of the pressure from AFC when the first real chance came for Kilcullen. A bit of a mix up in the middle for AFC and then the left back area allowed Kilcullen to get inside but the shot was blocked out for a corner. Kilcullen had grown into the game and they had another shot which went wide left from a tight angle but was kept in by the attacker.

Twenty-seven minutes gone and the third goal came for the home side when an AFC corner was powerfully headed in by Colin McEvoy at the back of a packed box.

Kilcullen almost responded immediately when the ball scurried under Colin McEvoy’s feet and the attacker got in but Lee Smyth in goals was quick to react and saved with his feet sending it out to safety.

The second half started with Kilcullen trying to emulate Jamie’s lightning first half opener by having an instant shot on the AFC goal but it just went over the bar.

Kilcullen had two bites at the AFC goal after a short back pass didn’t reach the keeper causing a bit of panic in the AFC box but Kieran O’Donnell was able to lunge to clear the ball away from the goal line. Let off for Portlaoise.

Kilcullen were starting to come stronger into the game and using the strong wind with them this half to rightfully have a few long range shots but Lee Smyth was well able for anything on target. It really was a much more open game in the second half as Ben Doyle, Robbie Farrell and the immovable object in Imran Shitta were in the midst of everything for AFC and Jamie Toman and Cathal Lee gave everything up front.

Both teams engaged in to-and-fro football for the remainder of the game but AFC were good value for the win and most importantly have 3 goals to bring to Kilcullen for the second leg and have conceded no away goals.