Panthers Boys cap off brilliant season with yet another cup 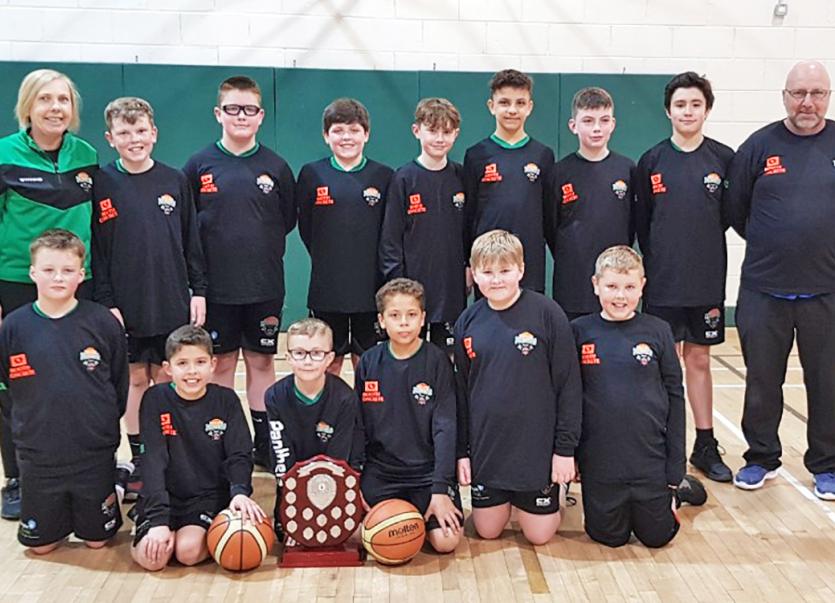 Panthers travelled as clear favourites having remained unbeaten this season with a Midland League and Top 4 cup win and also a Kilkenny Area League win including two wins over Tipp Talons in the regular season.

Tipp Talons got the better start with the first couple of baskets despite good work from Riley Comerford and Daniel Booth. As the quarter went on their was nothing between these two well organised teams with both playing well, David Apopei and Luke Bowe finished with scores after good work from their team mate Riley Comerford.

Tipp Talons upped the tempo of the game and started to dominate with strong man to man to turn over the ball and extend their lead. Portlaoise were playing well through Daniel Booth and David Apopei but they were unlucky with the final shot and despite Sam Menendez getting the final basket of the quarter they saw themselves down by 7 points.

The second quarter saw a new five players from each Club take to the floor and it was the Panthers lads who started the better this time with good scores coming from Dinny Troy and Jack Fennell. Portlaoise began to dominate with good ball movement from Brayan De Sousa and Jayden Bowe.

Tipp Talons were unable to breakdown the tough defensive while Portlaoise on the other hand keep the scoreboard ticking over with fine shooting from Fionn Stack who put 11 points on the scoreboard in this quarter alone.

In hindsight the game was won and lost in this quarter, Tipp Talons were struggling as the Panthers lads grew in confidence and went on a run that would see them put 23 points on the scoreboard while at the same time restricted the Thurles boys to only 3 points.

As the half-time whistle approached the Panthers boys extended their lead with great baskets from Jack Fennell and Dinny Troy to help their team to a 14 point lead, 31 points to 17 points.

The second half continued into a good running game with both teams playing well, exchanging baskets, Luke Bowe and Daniel Booth finished off some good moves with baskets and next up was Riley Comerford playing a Captain's part who also got a fine score after good work from Callum Kernan.

Portlaoise continued to dominate the game with some fine shooting from Luke Bowe after good movement of the ball from Daniel Booth. The pace of the game then slowed with both teams setting up their offensive and both were rewarded with baskets, Luke Bowe and David Apopei finished off some good team baskets to extend the Panthers lead.

The last quarter saw both teams relax with the final outcome of the game in little doubt. The Panthers lads continue to play well with Scott Davies and Brayan De Sousa putting in good performances on the defensive end while at the other end they kept the scoreboard ticking over with baskets from Jack Fennell and Fionn Stack who was eventually top scorer of the game with an excellent 21 points.

Tipp Talons to their credit never gave up battling for every ball and got a couple of fine scores but in truth they never really looked like they could bridge the gap. Portlaoise finished the game strong with the final score coming from Scott Davies to help his team go on to a well deserved win with an excellent team performance that sees them do the double double, Midland and Kilkenny league winners. Midland Top 4 cup and Kilkenny Cup winners.

It was a special day for young Riley as he Captain's the U-12s and later went on to help the U-14 Panthers in what was his second Kilkenny Cup win of the day.