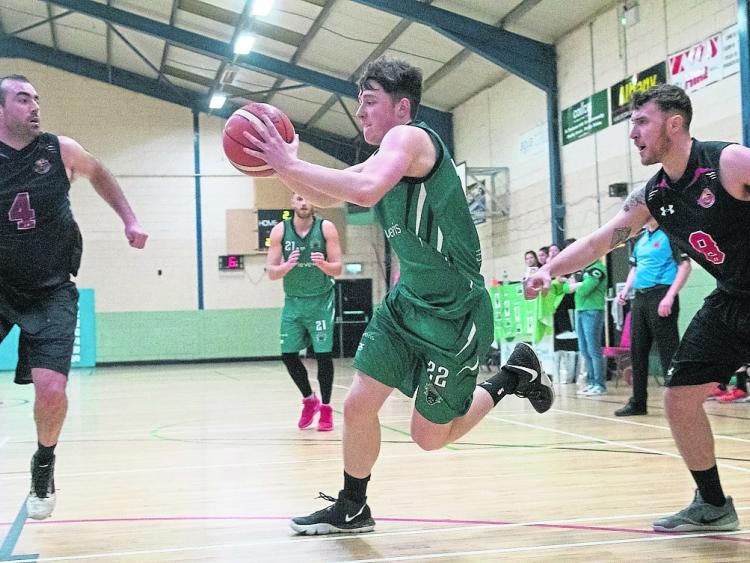 The game started at a hectic pace with both teams playing well, exchanging baskets, Pierce Bolger Hinds got Panthers off the mark with a couple of fine baskets followed by a big three pointer from Rian O’Connell.

The game settled in a pattern with both teams playing strong man to man defensive to try to cut out shooting opportunities. Gary Morrissey and Trevor Swayne were next to put points on the scoreboard after great work from Pierce Bolger Hinds. The Panthers lads were always a couple of scores in front in a quarter where the pace never slowed with both teams running the floor at every opportunity.

As the quarter came to a close Portlaoise extended their lead to 11 points thanks to some great defensive rebounding from Rian O’Connell and Pierce Bolger Hinds who had one of his best games in a Panthers jersey with the last basket coming from Conor Byrne. 25 points to 14 points.

The second quarter continued with these two excellent teams giving an exhibition of shooting that O’Loughlins has not seen in a long time, Trevor Swayne hit a couple of fine shots followed by their big man Rian O’Connell who was playing a Captain's part in what was turning out to be a great game of basketball.

As the quarter went on Waterford could not cope with a Portlaoise team that could score from anywhere with a different player stepping up every time they went up the floor to put points on the scoreboard.

Coach Alan Comerford introduced a couple of fresh players Tom Gbenoba and Aaron Murphy to great effect as both quickly got to terms with the pace of the game to get a few great defensive stops.

As the half-time whistle approached Waterford were always within a couple of scores but it was the Portlaoise team that finished the better thanks to baskets from Glenn Comerford and a big three-pointer from Gary Morrissey after great work from Tom Gbenoba and James Phelan to see them hold a 10 point lead at the break. 45 points to 35 points.

The second half continued much the same as the first with both teams playing well, it was a guards game with the relentless pace seeing James Phelan and Gary Morrissey putting points on the scoreboard for Panthers after great work from Aaron Murphy.

Both benches were then tested as the fouls began to mount on both teams, Rian O’Connell and Pierce Bolger Hinds had to sit down but Conor Byrne and Tom Gbenoba put in huge performances to maintain their teams intensity level.

As the quarter went on the Panthers lads were unlucky with the final shot on a few occasions up the floor but that was all it took for the Waterford side who continued to keep their scores ticking over as they enjoyed their best spell to bring them right back into the game.

The Panthers lads stayed calm and continued to trust in their own ability and were rewarded with a couple of vital scores from Gary Morrissey and James Phelan to see them end the quarter seven points up.

The last quarter had everything you could possible want from a final, passion, excitement, drama, and no small skill from two well organised teams, Portlaoise have undoubtedly some very talented young players when it comes to the offensive end of the game but the one thing that will please head Coach Comerford most was the unbelievable work rate on the defensive end and if anything got better in this quarter, Waterford were caught with the sheer pressure which forced them to take some poor shot selections that were gathered up gratefully by James Phelan and Trevor Swayne.

At the other end it was the O'Connell and Bolger Hinds show that eventually saw both players with over 20 points each in a game where their was not one but two MVP players. As the game came to a close Panthers extended their lead to 10 points through scores from Trevor Swayne and James Phelan.