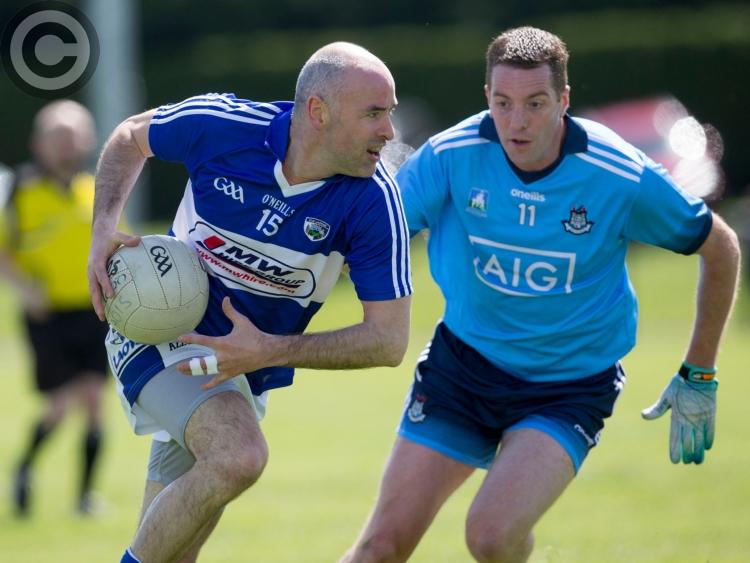 Greg Ramsbottom in full flight for Laois against Ken Darcey, Dublin in the All Ireland Masters Football Championship at Stradbally. Picture: Alf Harvey.

The Laois Masters football team welcomed the reigning All-Ireland champions, Dublin, to Bill Delaney Park in Stradbally on Saturday afternoon, but fell by four points in a battling performance in their first ever Championship outing.

A hat-trick from Stradbally’s Greg Ramsbottom wasn’t enough for Laois to overturn the reigning champs, but it wasn’t a bad result taking into account they went 2-4 to 0-1 behind in the opening quarter.

Laois who played Dublin in the All Ireland Masters Football Championship at Stradbally. Picture: Alf Harvey.

There were plenty of familiar faces on both sides with Colm Parkinson, Mark Rooney, Kevin Fitzpatrick, Chris Conway and Eamonn Delaney all taking to the field for Laois, while Ray Cosgrove and Peadar Andrews featured for the Dubs.

Dublin were quick off the mark as they raced into a three point lead inside the opening ten minutes through Ciaran McGuinness and Niall Crossan. Laois opened their account shortly after with wing-back Brian McEvoy splitting the uprights. 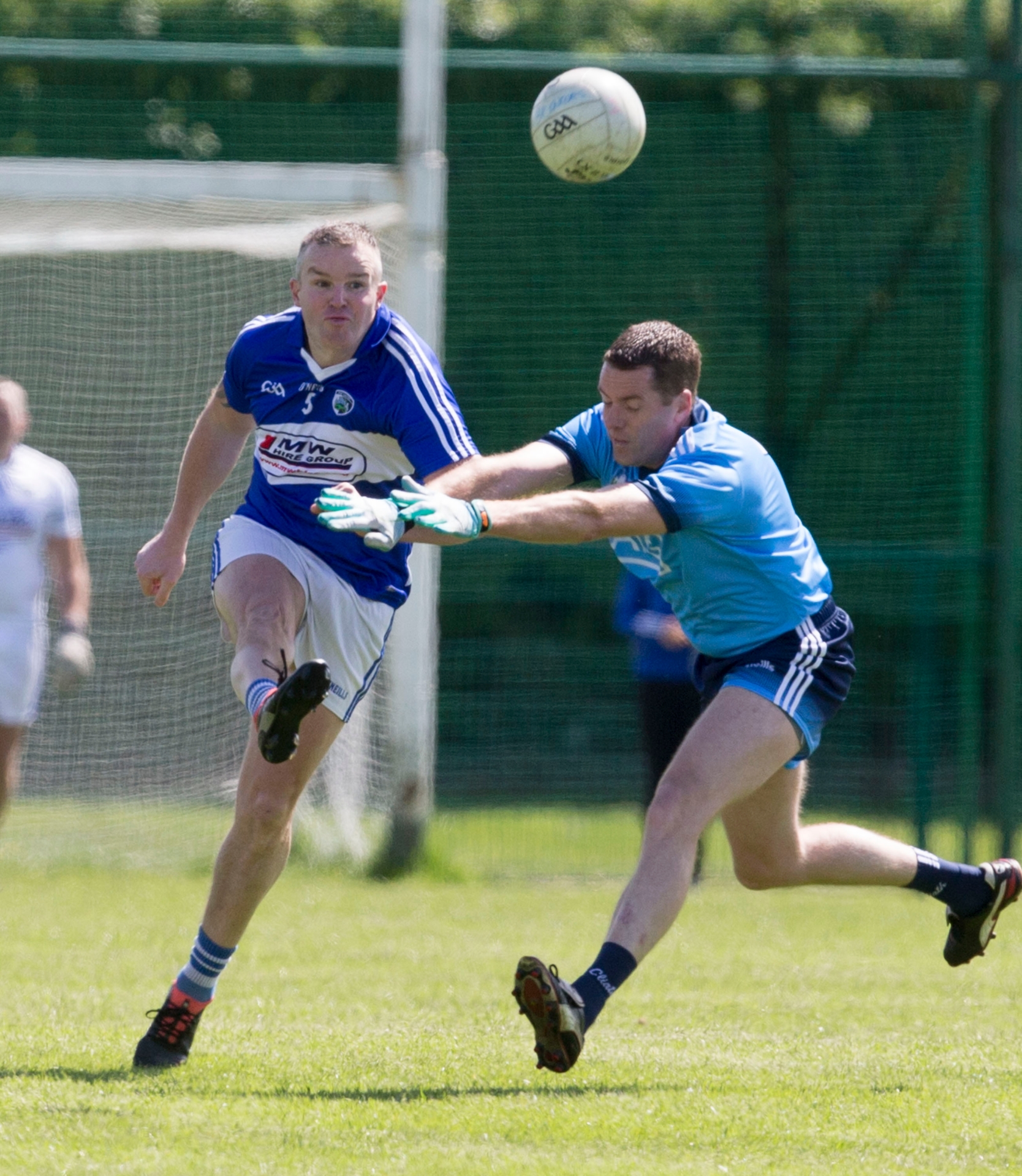 Brian McEvoy clears for Laois against Dublin in the All Ireland Masters Football Championship at Stradbally. Picture: Alf Harvey.

Things went downhill for Laois in the five minutes that followed as Dublin rattled the home net twice in quick succession through Crossan and McGuinness to open up a nine-point lead.

Laois got back on track in the second quarter with a brace of goals from Stradbally sharpshooter Greg Ramsbottom, one off of either foot, followed by a superb point from the outside of Wooly Parkinson’s boot, but Dublin remained on course with McGuinness’ second goal and points from Ray Cosgrove and Ken Darcy.

Despite Laois fight-back, Dublin showed their experience at this level and went in eight points ahead on a scoreline of 3-7 to 2-2 with a big second-half needed from the home side.

Laois put in a much stronger showing in the second half, closing the gap to two points and had a late goal chance found the net for the O’Moore men, Laois would have brought it back to a point with mere minutes to go.

Parkinson restarted the scoring after the interval, followed by a point from Kilcavan’s Rory O’Connell before Greg Ramsbottom completed his hat-trick soon after. The Stradbally man was hauled down in the square and then stepped up to dispatch the penalty past John Murphy in the Dublin goals. 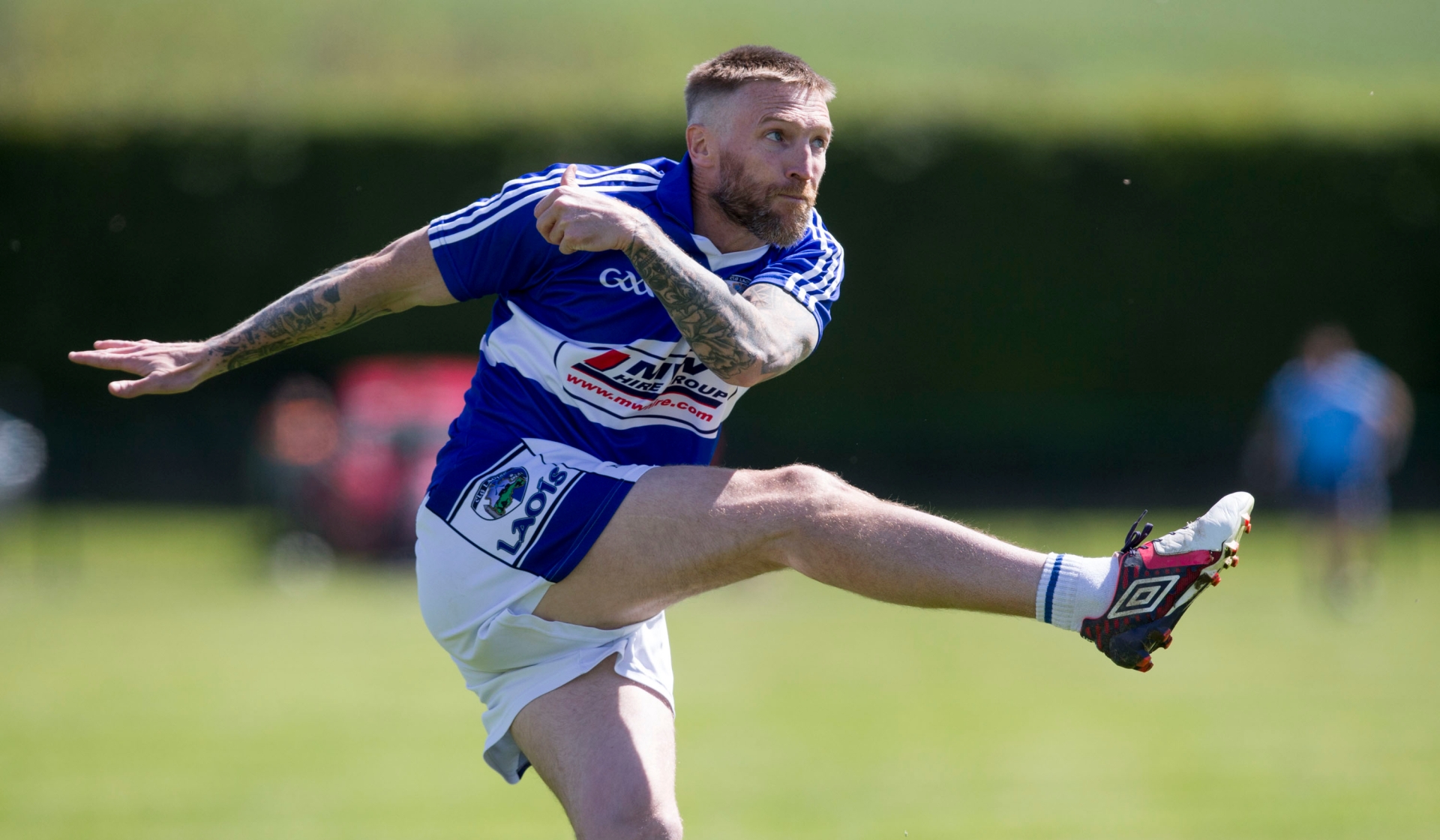 Colm Parkinson scores for Laois against Dublin in the All Ireland Masters Football Championship at Stradbally. Picture: Alf Harvey.

Two classics from Ray Cosgrove, a converted forty-five and a free from more than fifty metres out, alongside another Crossan free pushed Dublin four clear in the late stages.

Ballylinan’s Larry Keenan almost gave Laois a life-line when his flick on the long ball in forced a diving save from Dublin goalkeeper John Murphy. Portlaoise’s Kevin Fitzpatrick rounded off the scoring, but Dublin held out for a four point win.

Laois are back in action in a fortnight’s time away to Westmeath, and are hopeful of adding the likes of Tom Kelly, Darren Rooney and Paul Dunne to their ammunition in time for the clash. 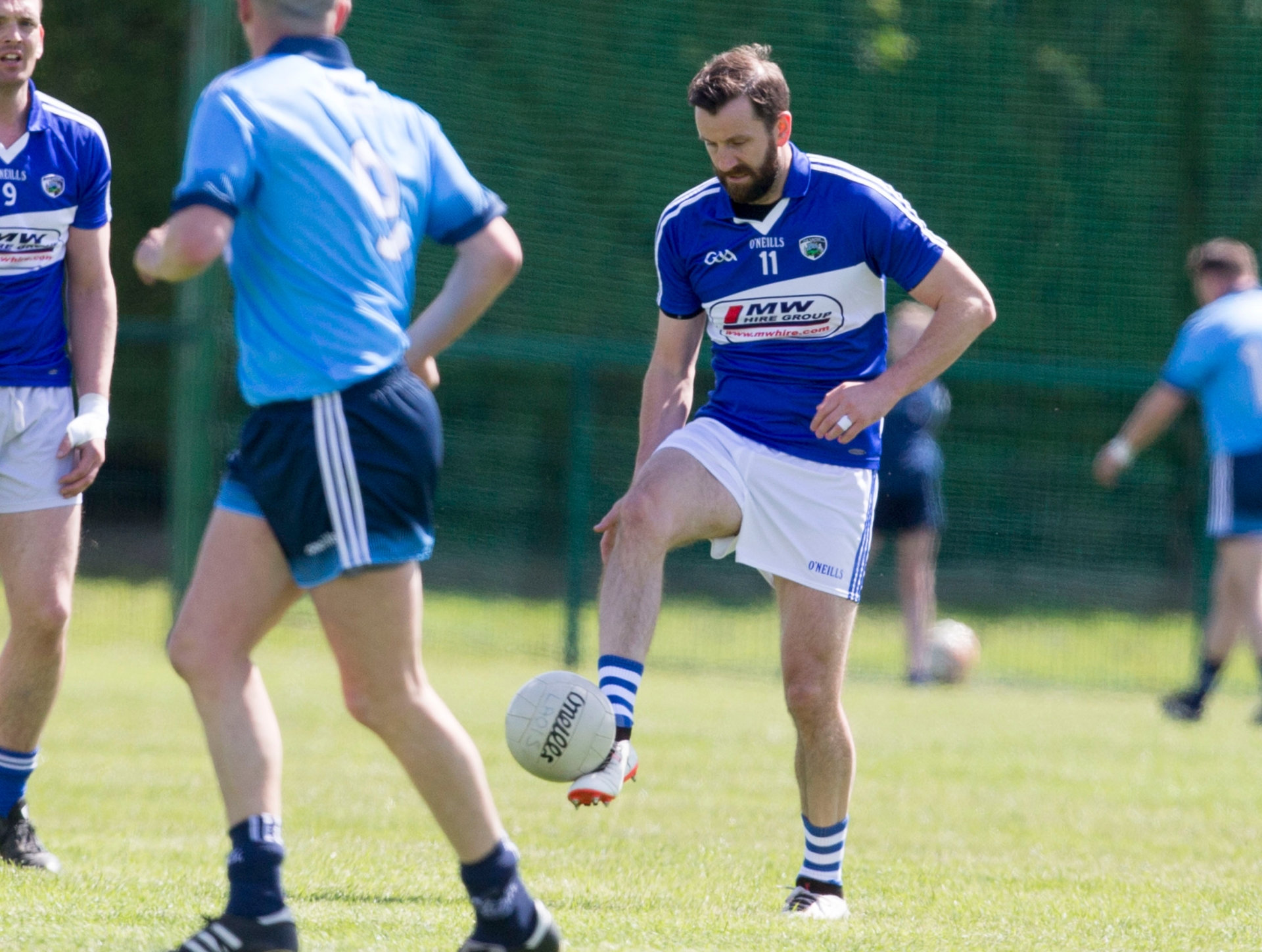 Kevin Fitzpatrick on the ball for Laois against Dublin in the All Ireland Masters Football Championship at Stradbally. Picture: Alf Harvey.