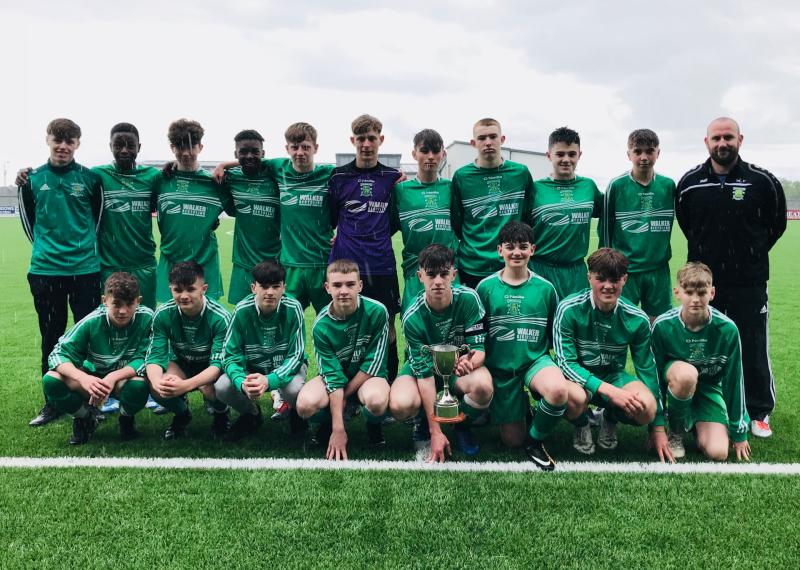 Portlaoise AFC had already done the league double over Mullingar this season but everyone knows that a one off Cup Final can throw form out the window and anything can happen.

With that in mind, AFC started well and Robbie Farrell had an early half chance header from Cathal Lee’s cross but the header went wide.

Four minutes on the clock and another chance for AFC as Robbie Farrell just pulled a volley wide from a lovely worked cross from Cathal Lee again.

Mullingar were putting in the tackles to try and break down the play with Colin McEvoy and Ben McDonald having to make some interceptions at the back.

There was a good competitive opening to the game from both sides with AFC having the best of possession in danger areas.
Eleven minutes gone and TJ Delaney scored a lovely Luis Suarez type goal.

TJ went from a stroll at the right side of the box to running at the defender and never gave up after that. TJ won the ball at the right endline and ghosted in towards goal beating another defender and beautifully flicked past the keeper. This was a great individual effort and exactly what AFC deserved. 0-1 to AFC as the away side.

The next few minutes saw sustained pressure from AFC after the goal with corners and chances for Cathal Lee and Kanye Tshula.

The second goal came on 17 minutes as Ben Doyle battled twice to keep possession on the far right sideline and he fired a cross from the right line to Cathal Lee at the penalty spot.

Cathal instantly flicked to Kanye Tshula and his shot was parried back to Cathal Lee to stick it away taking a good poacher’s goal from a quick team attack.

AFC were playing some lovely football right across the pitch during this phase and everyone was getting stuck in.

On 27 minutes one of the Mullingar defenders had to bravely put his full body on the line to block a Cathal Lee shot just as Cathal pulled the trigger.

Imran Shitta and Robbie Farrell were battling in midlfield very well. First half injury time nearly brought a real shock for AFC who were well in control. A Mullingar attacker took a speculative strike from distance when he had a bit of space and it hit the outside of the top left post with Lee Smyth in goal beaten due to the dipping effect of the shot. A let off for AFC there and just on the stroke of half time.

AFC started the second half well and nearly added a third on 37 minutes but Jamie Toman was unlucky not to stick it away.
A minute later Ben McDonald won the ball in the middle and fed Jamie Toman who passed to Ben Doyle who fired a low shot from the edge of the box but the keeper just managed to hold on to it.

With 44 minutes on the clock, Ben McDonald rescued his teammates with a great tackle near the box when the AFC defence was beaten to the ball by the Mullingar attacker.

Portlaoise, although having the better chances, lost a bit of momentum with Mullingar pressing harder and getting more time in the AFC half for about 10 minutes but no real breakthrough chances came with Lee Smyth and the defence able to deal with it.

Imran Shitta hit a cracker of a strike from outside the box and he was unlucky it didn’t result in an own goal as it ricocheted back off the keeper but it was scrambled away to safety on 50 minutes.

Conor Brown had a thumping shot go wide left after one of his trademark raids down the left. Jamie Toman then had a looping effort saved by the keeper and Kieron Whelan sent Cathal Lee in on goal but his strike was high and left.

Portlaoise were lucky with 12 minutes to go as a Mullingar free hit the lower outside of the right post this time. The woodwork had saved them for the second time.

Nerves and the ship were settled a lot though when Robbie Farrell buried the 3rd goal at the second attempt after the keeper saved his first shot after good work from Jamie Toman, Ryan Mitchell and Kieran Whelan to create the chance with 10 minutes left.

Ryan Mitchell had the last shot in anger for AFC with five minutes to go as the rain belted down for the last 10 minutes.

The final whistle blew and this Portlaoise AFC side completed the MSL treble by adding the Sean Lowry Cup to the East Division Title before Christmas and the Major Division Title in recent weeks without losing a game this full season.

There is still a chance of a fourth title as they lead Kilcullen 3-0 after the first leg of the Midlands Cup semi-final.