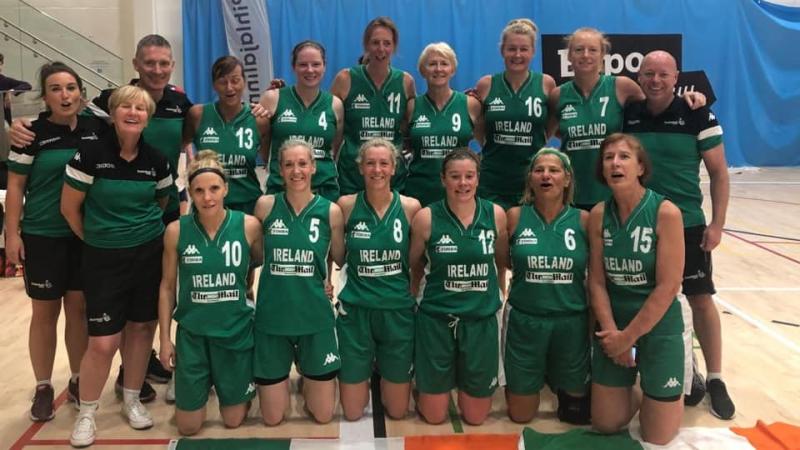 A four-person strong Portlaoise Panthers contingent linked up with the Irish national team ahead of the FIMBA World Masters Basketball tournament in Finland that started last week and is still running.

Back in April, four ladies from the Portlaoise Panthers club were selected on the Irish squad to travel to Espoo, Finland, to represent Ireland at the World Masters Basketball tournament

Ireland were drawn in Pool D with Mexico, Finland and Columbia for the tournament that kicked off last Sunday. The team jetted off from Dublin airport on Thursday morning destined for Finland.

The opening round for Ireland pitted them against Mexico, which they lost on a score-line of 57-44.

The game was very closely contested for all of three quarters, with little to nothing separating the sides. However, a late spurt from the Mexicans in the fourth gave them the breathing room to push on and grab the points.

All four Portlaoise Panthers women saw action. Ann-Marie Troy scored a single point, while sisters Grainne and Deirdre Tomlinson accounted for ten points between them, Grainne getting seven and Deirdre with three. Pam Grogan was also on the board scoring four points.

Their second group game saw them face hosts Finland, and after losing the opener, Ireland desperately needed to get a result. However, a second defeat followed. Ireland lost out on a comprehensive score-line of 49-71.

Ann-Marie Troy put in a solid shift in the second quarter, but Ireland still went into the break trailing 21-31.

Grainne and Deirdre Tomlinson caused a number of turnovers in the third quarter, which resulted in Troy and Pam Grogan performing better up front.

Ireland bounced back from that loss to grab their first win against Colombia.

Deirdre Tomlinson top scored with sixteen points, while Grainne Tomlinson scored another two. Troy got five to her name and Grogan got seven.

Ireland then went forward to take on neighbours Great Britain, with the game having got underway at 2:30pm Irish time earlier today.

Full of confidence after picking up their first win over Colombia, Ireland took to the court and scored another superb victory, beating Great Britain on a final score-line of 59-41.

Again, all four Panthers featured, and played crucial roles in the Irish victory.