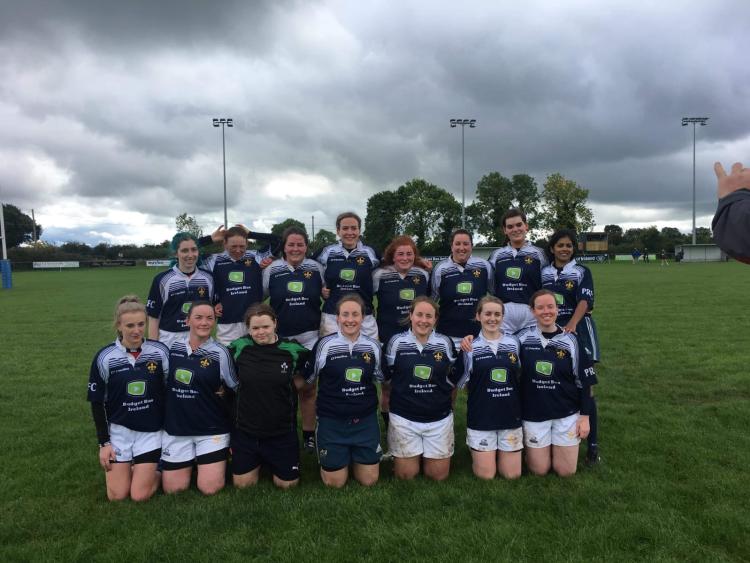 Portlaoise Ladies kicked off their season at home in Togher on Sunday last against a strong Gorey side.

With no less than five un-capped players the Ladies were eager to get their first game underway and knew it would be a tough game against the recently demoted from Division 2, Gorey.

Portlaoise received and the ball went to the hand of one of the new players, Dee O'Callaghan, who dropped the shoulder and expertly carried into contact, taking down three Gorey girls with her. This was to be a sign for the game to come as Portlaoise's pack dominated at the breakdown allowing Portlaoise to retain the bulk of possession.

Lynn O'Callaghan kept the Gorey attacking line under pressure all day with her line speed causing knock ons and forward passes. The scrums went well for Portlaoise considering 4 of the 8 in the pack were new players, with Chinchiu Joy and Denica McGrath scrummaging hard. However when Gorey did have the ball, their seasoned players were quick to get the ball out to their backs. This led to Gorey opening with a Try after 5 minutes which was unconverted.

This put a bit of fire under Portlaoise with Elli Maguire and Jenny Keegan making line breaks at the wings and Denica McGrath and Alison Holmes in the forwards carrying strong and hard up the middle.

However, Gorey continued to be lethal when they got ball in hand and pulled off an excellent team try with the supporting run of their 12 being too much for Portlaoise. This time Gorey scored right under the posts and converted. The score stood at 12-0.

Gorey seemed to get complacent at this point and their penalty count began to creep up. With 16 penalties conceded the referee gave multiple warnings which culminated in 2 yellow cards for Gorey before half time.

In the second half Portlaoise capitalised on Gorey's decrease in numbers and the pack carried strong, sucking Gorey in while the backs aligned on the wings, quick thinking from Rachel Murphy at 9 and Amy O'Callaghan at 10 allowed Rachel Palmer to get the ball on the wing and she ran it under the posts for a Portlaoise try which was easily converted by Murphy. Portlaoise were back in the game.

Gorey came back strong but they were no match for the Portlaoise pack who again carried hard and turned over 3 scrums against the head.

A break from Emma Brophy up the wing was supported by Jenny Keegan who managed to step in off the touch line gaining great ground for Portlaoise.

Another break of the same manner gained another 10 meters, however this time the ball went to touch, the pressure of Olivia Fennelly in the Portlaoise line-out, caused Gorey to throw in a crooked ball. Portlaoise captain, Yvonne Palmer, opted for the scrum and Portlaoise used their signature move of the 8 pick and go, with Rosie Palmer offloading to Amy O'Callaghan who side-stepped three players to dot the ball down under the posts. Again the kick was easily converted by Rachel Murphy leaving Portlaoise winning by 2 points.

Further infringements from Gorey saw two more players being sin-binned. Portlaoise were getting tired at this stage and began to rack up a few penalties themselves. This saw two yellow cards for Portlaoise and Gorey capitalised on this running up the wings and exploiting gaps. Newbie, Tania Maher, made a try saving tackle bringing one of the Gorey girls into touch and it was a Portlaoise line-out. The ball went long with an overthrow to the back which didn't go to hand.

Portlaoise were under pressure and held the line hard. However, a penalty for a ruck infringement allowed Gorey to regroup and form pods against a 13 woman Portlaoise side, inevitably Portlaoise succumbed to the now 15 aside Gorey and they scored left of the post. This was not an easy conversion but the Gorey kicker gave it a solid boot and it went over. The final whistle blew. 19-14 to Gorey.

While Portlaoise Ladies lost the game they will take away a lot of positives from the season opener and will regroup for their next game away to Arklow on Sunday the 6th of October.

Congratulations from all the team to past Portlaoise player, Claire O'Connell, who gets married on Friday the 11th of October.
Portlaoise Ladies are always recruiting and train Tuesday and Friday. Contact Rosie 0874445274 or message their Facebook page for more details.