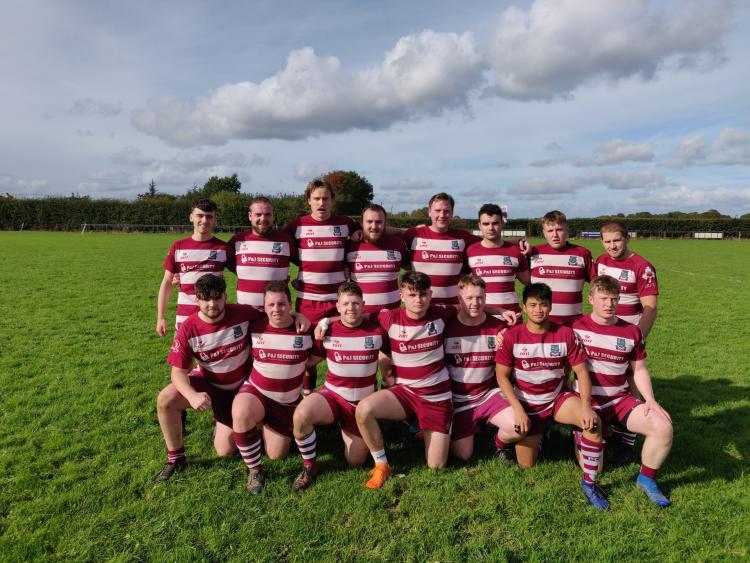 A youthful Portarlington side booked their place in the J2 Lalor Cup final having overcome a determined Clondalkin side by 28-5 at Lea Road on Sunday last.

Although outscoring the visitors by four tries to one, it was the defensive effort from every player that was most impressive in this game - but for sheer physicality and determination centre Rory Bracken stood out, continually making numerous big tackles. He was ably assisted by Darren O'Connor at wing forward who kept the visitors back row and especially their big No 8 under wraps.

Both teams were determined to play running rugby in good conditions but with both defences holding strong a large part of the first half was played on the half-way line as both teams looked to get the first score.

With the Port forwards starting to gain some momentum in attack, strong bursts from second rows Keelan Hunt and captain Aaron Ryan paved away for the gaps to be found and straight running from Sean Mooney and Stephen O'Carroll allowed out-half Cormac O'Hora to bring centres Bracken and Reece Cuddihy into the game with both a threat throughout the match.

Paul Mannion, playing at scrum-half, put some telling probing kicks in behind the defence which wings Jack Casey and Tadgh Tully chased with menace. However, a lot of this good work was undone with the home side penalised on numerous occasions for off side at the ruck allowing the visitors to clear easily. This was a feature of the game and one that will have frustrated coach Doyle.

The game’s first score came on 26 minutes and it deservedly went to the home side, some super picking and driving from the front row of Aaron Meagher, Fintan Murphy and Conor Houlihan allowed the ball to make its way to wing Casey who finally evaded his opposite number and made an impressive break up the right touch line and managed to offload to full-back Anavil Storey who slotted under the posts to score. O'Hora added the extras.

Portarlington were starting to have more and more of the ball with the backs and forwards linking well. The Clondalkin defence was holding strong, however on 36 minutes after an initial break by Mannion that brought Port into the visitors 22 and constant pick and drives by the pack, it was Mannion who was on hand to pick up a loose ball to stretch over the line about 5 metres to the right of the posts. Again, O'Hora added the extras.

Clondalkin were not to be out done and when Port lost possession from the restart they finally broke through the defence and when their No 7 was brought down out about 5 metres from the line. A clever cross-field kick found the winger in space and he cantered across for the try. With the conversion missed the half ended 14-5 to the home side.

A number of changes at half time saw Joander Brazon, Dylan Stronge and Connor Perry introduced to great effect. The backs were finding space out wide and it wasn’t long before Port were on the scoresheet again.

Initial evasive running from Cuddihy brought play into the visitors 22 and with Bracken coming on the ball at pace, he broke the first tackle and was held up just short of the line, and with ball popped to big second row replacement Dylan Stronge he crashed over. O'Hora kept his 100% and added the extras.

Port continued to press in attack, more changes saw the introduction of Paidi Mahon, Simon Doggett, Glen Hassett and Andrew Evans and it was Doggett who was on the scoresheet on 66 minutes.

A great kick chase from Storey and Hassett forced the Clondalkin winger into touch just outside his 22, a quickly taken throw and exchange of passes allowed Doggett to speed in under the posts. O’Hora again converted to see Port lead 28-5.

Portarlington will now play Naas in the final on the 28th of December, and following strong rotation there will be a lot of players putting their hands up for selection.