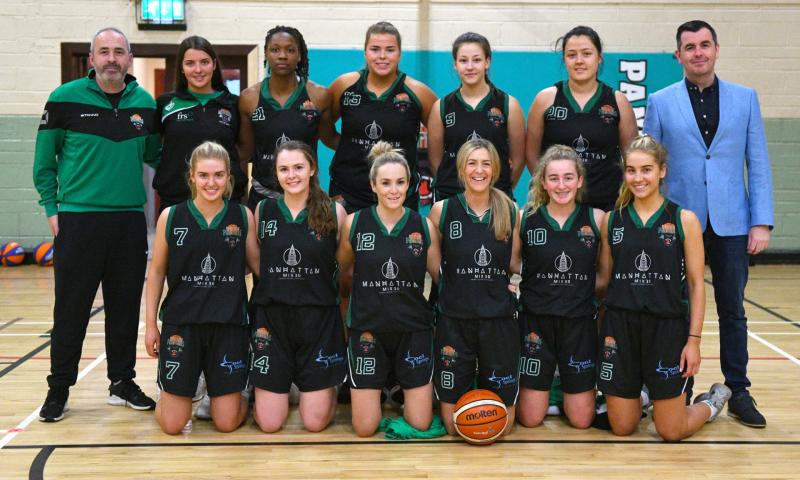 Portlaoise Panthers Ladies secured their place in the quarter-final of the National Cup with a hard fought victory over Limerick Celtics.

This was the second visit to St Munchins college in the same number of weeks for the Panthers ladies and while there was the same end result, this game took a far different course than the first. Portlaoise trailed from the second minute till after half time but an outstanding third quarter performance created the platform to go on to take the win.

Portlaoise were high in confidence going into this game after extending their winning streak against Belfast Rockets the previous week. They got the first score of the game as Ciara Wheeler converted one from two at the line.

Kendell Bradbury responded for Celtics with a three point play followed up in the next offence with an offensive rebound and finish under the basket. Celtics continued to pile on the pressure early and exploited a very open Portlaoise man to man defence.

Aoife Henn punished some poor defending with two long two pointers with the lead pushed out to nine points after a first three pointer of the game from Bradbury.

The Panthers coach kept faith early on and his team began to respond as they closed the gap with scores from Jasmine Burke, Sarah Fleming and Trudy Walker. The defence remained a concern as Celtics continued to convert with ease and managed to notch up a massive thirty point haul in the quarter.

Luckily for the visitors they were able to keep the scoreboard ticking over as they added six points from point guard Ciara Byrne and a first from Hannah Collins to leave the score 30-24 at the end of the quarter.

The pace of the game slowed down in the second quarter as both sides got to grips with the offensive threat of their opposition. Kendell Bradbury continued where she left off in the first with a three point play.

Trudy Walker began to get into her groove with her first score of the quarter and Ciara Byrne brought her side closer converting a free throw followed up with a fast break lay up. Bradbury added further to her personal total and ended up scoring her teams seven point tally. A well finished drive to the rim and a powerful basket by Walker left just three points between the sides at the half on a scoreline of 37-34.

Whatever was said at half time in the Panthers dressing seemed to spur the team into action as they quickly took the lead courtesy of three quick baskets from Trudy Walker. Ciara Byrne led from the point once again and Burke sisters Jasmine and Shauna picked up the pace inside the key with a basket each after some great play.

A stunned Celtics found it hard to convert on their offensive end and the Panthers girls took full advantage as they broke out time and again to finish on the fast break, Sarah Fleming and Ciara Wheeler being the main beneficiaries. Deirdre Tomlinson came up with the assist of the game before adding her first points in the next offensive play.

At the other end a fantastic defensive display limited Celtics to just two points which gave Portlaoise a large nineteen point lead heading into the final quarter.

The fourth quarter started with both teams trading scores, Walker again to the fore for the visitors. Celtics continued to rely heavily on the scoring of Bradbury but Walker continued to limit her chances.

With a commanding lead built up the Portlaoise girls patiently worked the ball in offence while picking off some more valuable scores. Celtics were matching Portlaoise score for score but couldn’t make inroads into the Panthers lead.

Walker, Byrne and Fleming top scored for Portlaoise but the fightback in the second and third quarters was firmly due to the team's overall defensive performance as they kept Limerick to just nine points in this twenty minute period of the game.

Their hard work is rewarded with a quarter finals against National League newcomers who have already taken wins off both Fabplus and Limerick Celtics so a big performance will be required if this young squad are to reach the National Cup semi final in January.