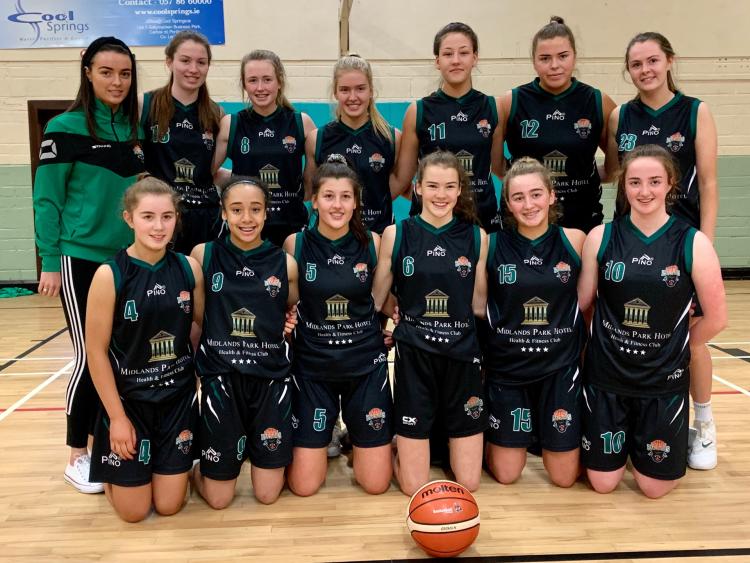 Panthers Under18 Girls started their cup campaign at the weekend with their first game against Dublin side Meteors.

Meteors won the tip and got off an early three-point shot that was rebounded by Ciara Byrne who then made a great hustle to set up Gillian Wheeler for the opening score. After two minutes Meteors levelled with a good jump shot before Wheeler added two more points after an excellent offensive play.

Jasmine Burke was dominating under the boards early on setting her teammates on vast breaks. Sarah Fleming collected an offensive rebound and was fouled when going to the basket making one of two. Great communication on defence forced turnovers Hannah Collins contested and won an excellent rebound, found Byrne on the outlet who hit Fleming on the weak side trail to finish a brilliant fast break.

Portlaoise changed to a full-court press which rattled their opponents resulting in two points for Byrne after another turnover. A small lapse in concentration allowed Meteors to settle more into the game but this was short-lived as Byrne and Lisa Blaney finished two more fast breaks.

The pace of the girls was too much for Meteors to deal with. Fleming had a great interception to set up Wheeler for a massive 3 pointer followed by another fast-break finish by Blaney.
Fleming again found Wheeler on the break after another steal. Grainne O'Reilly was settling into the game well and collected an offensive rebound and found Jasmine Burke on a drive to the board. Meteors hit a buzzer shot to finish the quarter on a scoreline of 20-7.

Meteors opened the scoring of the second quarter after picking up their own offensive rebound. This was counteracted by Wheeler with a drive to the board and making it a three-point play after scoring the resulting free throw. Blaney who made a huge impact when introduced halfway through the first quarter kept this going into the second finishing another fast break.

A really well worked inbound play gave Blaney an opportunity to drive to the board drawing a foul and making 2 from 2 on the line. A huge hustle by Byrne to win possession set up an offensive play where she picked out O'Reilly who had made a very intelligent backdoor cut to the basket. Meteors found themselves in trouble with seven minutes left in the quarter.

Excellent build-up play with all five on the floor involved finished with a three-pointer from Fleming. Another steal saw Ella Byrne find O'Reilly who made a great drive to the board adding two more points. Meteors added two more points with a strong fast break before Collins added two more. The girls played a superb rotational offence finished with a three-pointer from Ciara Byrne. Sarah Touhy made an immediate impact when introduced collecting two offensive rebounds. A lapse of concentration at the end of the half saw Meteors score 4 easy points leaving the score at half time 42-22.

Hannah Collins opened the scoring of the second half with a long-range jumper from the wing. Meteors were keeping things close for the quarter halfway through and were gaining some confidence. Blaney finished a much needed fast break after a steal by Wheeler but this didn’t turn the momentum. Jade Burke stepped up the pressure again forcing a turnover and setting up her sister for a fake and drive to the board where she was fouled and made one from two.

At this stage, Meteors were showing more determination and fight. A big boost came when Zara Mulvihill nailed a much needed outside jumper. This finished the scoring for the quarter and the girls took a lead of 51-30 into the last ten minutes.

It took two minutes before the opening score and it came from Byrne who was leading from the top in her captain’s role. Jade posted up strong inside drawing a foul and winning possession for the girls. Faith Umeh spotted AMC gap in the defensive zone and took full advantage with an excellent basket. Ciara then hit another three-pointer which swung the momentum back in the favour of Portlaoise.

Meteors were getting a hold on the game again and would be in the driving seat only for the twenty point lead built in the first half. The girls were lacking some focus and needed someone to step up and show some leadership. Blaney started to motivate and Zara picked up on this scoring a massive three-pointer. Some flair was present again and a brilliant one-two between Wheeler and Blaney finished the scoring of the game on a final scoreline of 66-46.