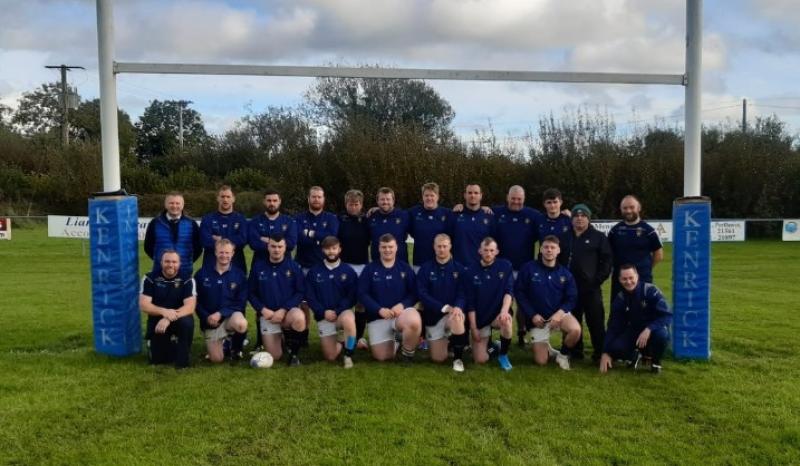 The Portlaoise First XV travelled to the Maws in Kilcock on Sunday afternoon to take on North Kildare in a mid-table clash with the home-side being the clear favourites to come out on top.

Portlaoise got off to a fantastic start and were awarded a penalty after just 5 minutes of play. Portlaoise made no mistake in taking advantage of the opening opportunity and took their 3 points. A quick turnaround of play saw a penalty fall to the other side as North Kildare were awarded one for a Portlaoise RFC infringement as they equalised the scoring.

The visitors worked hard and an inspirational individual try from Portlaoise’s number 10, Darragh McAuley, put them higher up the scoreboard. McAuley kicked through into a dead ball area and chased forward catching his own kick to touch down for the first try of the game. The conversion was confidently kicked by Jack Reddin.

Jamie Holohan was quick of the mark when he took advantage of an excellent chance for a try. Jack Reddin’s penalty came off the uprights and Holohan, who found himself in the catching grounds, claimed the rebound and touched down to claim Portlaoise's second try in the 20th minute, leaving Portlaoise in the driving seat at 17-03 with just 20 minutes on the clock.

In the closing minutes of the first half, tiredness set in and Portlaoise made some poor tackling decisions, which opened up a scoring opportunity for North Kildare and they took full advantage for the try and the conversion, narrowing the gap to 17-10 at the break, still in favour of the visitors.

North Kildare continued to narrow the scoring difference with a try straight after the restart of half time to leave Portlaoise leading by just two points, 17-15.

On the upside for Portlaoise, whose set pieces were dominant, they were awarded a penalty try halfway through the second half after a series of scrums collapsed on the North Kildare side. This put Portlaoise further ahead on a scoreline of 24-15. But with the home side determined to take the point, they clocked up a brace of unanswered tries to rob a narrow one-point lead going into the dying minutes.

Last week’s Man of the Match, Paudie Bourke, came to the rescue again Sunday when he scored the third and final try from play in the last minute of the game. The conversion was miskicked however but the try was all Portlaoise needed to take home a four-point win, 29-25.

While the First XV were lucky enough to make the trip to North Kildare worthwhile, the seconds, unfortunately, were not as they suffered a close defeat at 22-19 to North Kildare.

This victory sees Portlaoise sit comfortably in third place in the league with a series of games still to go. Portlaoise are at home to Balbriggan on Sunday the 10th of November, and a win in this clash will see them enter the top tier of the table.