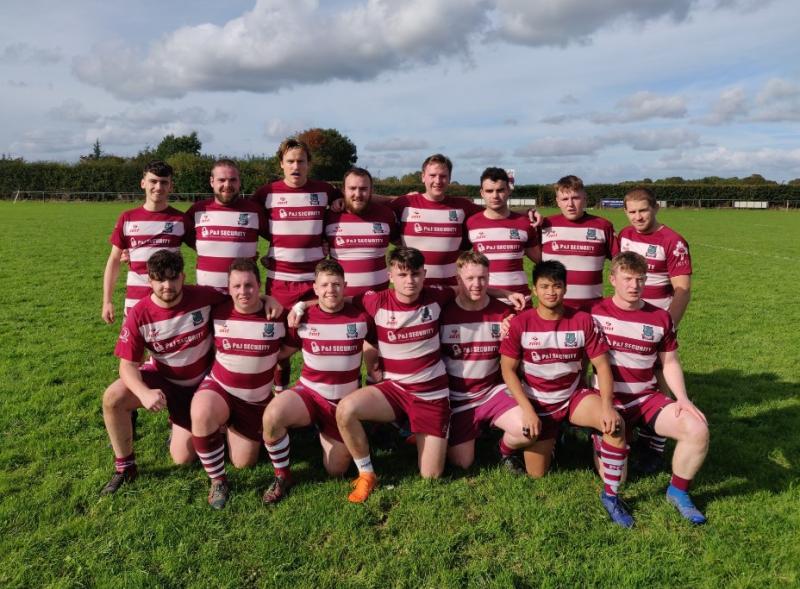 Portarlington RFC first team stayed in contention for honours in Division 3 of the Leinster League with another fine win over second-placed Ardee at Lea Road on Sunday last.

Played in excellently dry but cold conditions, both teams were determined to play open rugby. Having lost a close game to Ardee at the start of the campaign this was very much a revenge mission for the Port lads. However, it was the visitors that started the stronger and totally controlled possession and territory for the opening quarter with the home side finding it difficult to exit their own half.

Strong running from the Ardee loose forwards in the tight initially allowed for space out wide and then at every opportunity they spread it wide. The Ardee backline had some elusive runners who created a high number of missed tackles but what became the trait of the match was an excellent team defensive effort where one Portarlington player missed a tackle there was another waiting to make the tackle.

As became evident by the end of the game this huge defensive effort frustrated the visitors and for all their possession and territory they weren’t troubling the scoreboard. Early penalties on 7, 18, and 23 minutes were kicked to the corner. The Port lads were equal to the task and either won or spoiled the lineout or defended the driving mauls effectively to turn over the ball.

The front five of Meagher, Murphy, Houlihan, Hunt and Oakley provided the platform for the back row of Bracken, Petriw, Brazon to keep the pressure on their dangerous opposition numbers. Petriw, in particular, carried the ball with great vigour rolling back the years.

On 31 minutes the visitors finally took their first shot with an opportunistic attempt at goal from just inside the Port half which fell just short. Despite this missed chance Ardee were still in control however and finally the home side found their rhythm and they brought the game to visitors.

After a line out just inside the visitors half, the ball was spread to Mulhall in the centre and when he broke through the initial tackle to race down the field and, despite being caught just inside the 22, he managed to offload to Doyle who went in under posts on 38 minutes which Evans converted for a 7-0 lead.

This seemed to knock the stuffing out of the visitors and Port could have scored again but had to settle to end the half 7-0 nil in front.

Portarlington started the second half the stronger and although some great try chances went amiss, learning some lessons from their opponents their shot at goal at the first chance when Evan converted from wide on the left side on 43 minutes.
The game really came to life with some heavy hits on both sides and, although the game could have boiled over, referee Barry Dempsey ensured the players were aware who was in charge and although the penalty count rose on both sides, the game continued to flow.

Portarlington continued to press for the next score and following some great running from Evans, he fed Cuddihy, who in turn found replacement Jack Walsh who broke the last couple of tackles to break through and score. The conversion was missed, but Port had a commanding lead.

The visitors became more desperate but despite their best efforts couldn’t break down a strong Port defence and one super hit from Kyle Ryan that dislodged the ball as Ardee were on the verge of scoring summed up their efforts.

Some fine running from replacements O’Connor, Stronge and Ryan came close to scoring further tries, but they had to settle for further penalties on 71 and 78 minutes from Evans which pushed the home side into a 21 – 0 lead which would ultimately be the final scoreline.

Portarlington are away to the Dublin Dogos with kick-off at 2pm in Sydney Parade next Sunday, all support would be welcome to help the lads continue their push for honours.