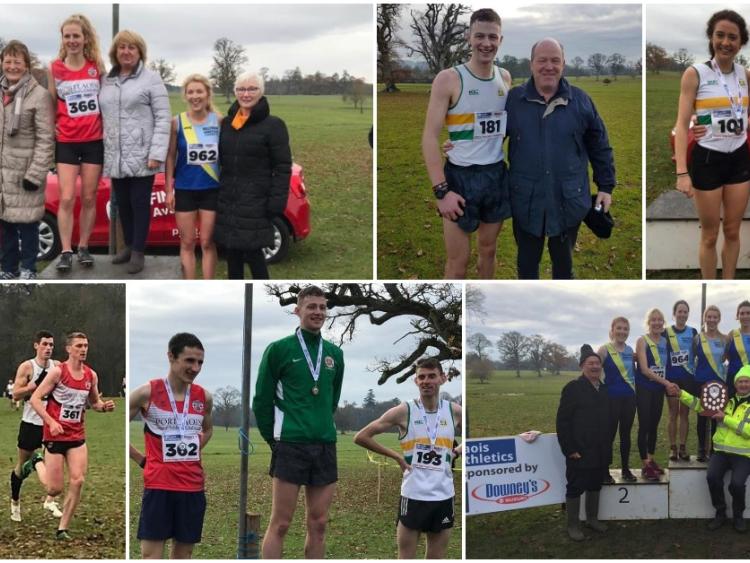 A massive crowd gathered for the final competition in the Laois Cross Country Championships on Sunday last. Athletes headed to Stradbally, home of the Electric Picnic, with special thanks to the Cosby family and witnessed two great races in cold but beautiful conditions.

The event was hosted by St. Abban’s AC and began with an U-8s non-championship race and then followed by the Juvenile uneven ages groups. It is always a great event for juveniles as it is a chance to compete as a team and for clubs to encourage 4 athletes of the same age group to compete.

The Ladies were the subject of the day and it was great to have international athlete Mary Mulhare taking part. Mary came second in the National Senior Cross Country event last weekend and next weekend she will be representing Ireland as part of the European Cross Country Team in Lisbon, Portugal.

Mulhare could have been excused for taking a break this weekend but instead, she proudly represented her club Portlaoise AC on the anniversary of the Ladies 50th Cross Country Championship and took home her 8th Senior Championship title.

Second across the line was Maisy O’Sullivan from St. Abban’s AC, also on the back of a great run at the National Championships. Third woman home was Breda McDonald from Ballyroan Abbeyleix & District AC who had a lovely steady run throughout. Caitlin McDonald, St. Abban’s AC, was close behind with a 4th place finish. Kate McDonald, Ballyroan Abbeyleix & District AC, was fifth with club mates Louise Mahoney and Siobhan Burke in 6th and 7th position respectively.

It was a fantastic turnout for the 50th anniversary of the ladies race and we had the top three from that first race from 50 years ago to see the ladies off on Sunday.

The first-ever Laois Senior Ladies cross country race was held in The Ridge in Portlaoise in November 1969 and a field of 40 runners was won by Sheila Brennan from St. Abban’s AC. Sheila was an invited guest in Stradbally, as were other winners over the years, and she was joined by the second and third-placed runners in that historic race 50 years ago – Noreen O’Connor from Ballyfin and Martha Furlong from Mountmellick. The three women posed for photos on the podium and then again with the first three from this year’s race.

Next up was the Men’s 10K race and from the gun it was one to watch.

As the laps passed, the lead changed hands several times. It was not until the final lap that Cian Kelly and Tom Lupton broke the pack and pulled away. There would be no relief for either athlete though as the pace accelerated, the noise of the crowd rose to a crescendo as Cian Kelly, this year’s junior champion, in his first Laois Senior, drove to the finish to take the win, with Tom Lupton in second place. He was quickly followed home by Sean Geoghegan in 3rd and Brian Kelly in 4th place.

St. Abban’s AC won the team event with 38 points. Cian Kelly, Sean Geoghegan, Brian Kelly, John Fenlon, Mick Kelly and Naoise Kettle retaining the cup for another year. The Kelly family have a long history of athletics with St. Abban’s AC both as athletes and coaches, it was surprising to realise that Cian is the first Kelly to win the much-coveted title.

Well done to all who competed or supported on the day and a special thanks to Pat Whelan of St. Abban’s AC for all his work in organising the ladies event and their new cup which was presented with all previous 50 winning teams engraved on it.