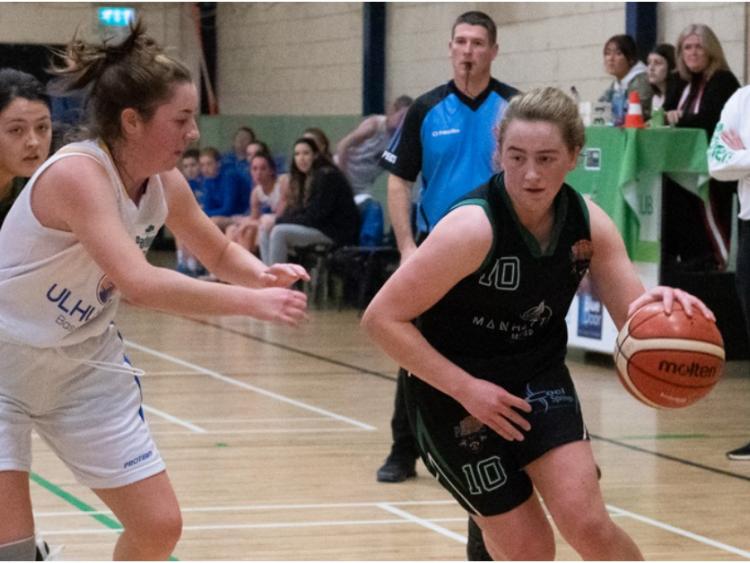 Portlaoise Panthers played host to Tipperary Knights on Saturday night last with the final spot in the National Cup semi-final weekend up for grabs.

Ulster Elks, Trinity Meteors and St Mary’s Castleisland had already progressed with the winner of this encounter facing off against Castleisland in Cork the second weekend in January.
A massive first half was to be the difference between these two sides with Portlaoise Panthers securing their spot for the second year in a row.

This was the first meeting between these sides so both teams hadn’t much to go off heading into the game. Tipperary Knights’ American Courtney Strait has been averaging just over 20 points a game and she knocked down the first score of the game from beyond the arc. A well-worked end-line play gave Sarah Fleming her first opportunity and she drained a three pointer from the corner.

The presence of the Knights 6’3 Tobin twins was attracting attention for the Portlaoise defence and Rosie Tobin got her first points of the day to take the lead once again. But this was to be the final lead for the Knights as Portlaoise began to dominate both ends of the floor.

Ciara Byrne was controlling the offence while chipping in with four points in a row for the Panthers. A second three-pointer of the quarter by Sarah Fleming was just reward for the patient play on the offensive end. Portlaoise were doing a brilliant job on limiting Tipperary’s opportunities with Ciara Wheeler restricting Straits influence on the game.

Jasmine Burke and Trudy Walker were doing trojan work and their great pick and roll play saw them get to the board with six points between them. Deirdre Tomlinson entered the game and added two points from the free-throw line to give the Panthers a 22-7 lead heading into the second quarter.

Portlaoise continued where they left off as they extended the lead further with Walker and Tomlinson again combining well inside the key. Tipperary had no answer to the pace being played by Portlaoise and as they got to grips with the inside threat, up stepped Ciara Byrne and Ciara Wheeler to punish them from beyond the arc.

Marie Creedon and Courtney Strait replied with three points each but Trudy Walker was beginning to find form and went coast to coast to add to the Panthers lead. She continued to dominate down low bringing her first-half tally to thirteen points. Lisa Blaney finished off the first half scoring from the free-throw line in her first senior game for the club, leaving the scoreline at the half-time buzzer 43-14.

The third quarter was much more of a contest as Tipperary continued to fight for every score. Indra Sveda came into the game for Knights and was straight away on the score sheet with a free-throw. Further baskets by Sveda, Strait and Creedon were welcomed scores for the visiting crowd who continued to cheer on their side throughout the game despite the score.

Portlaoise continued to press forward and hit another two daggers from deep with Wheeler and Fleming accurate once again from three-point range. Ciara Byrne was in brilliant form and continued to push the pace of the game while scoring some important baskets in the process. Lisa Blaney and Deirdre Tomlinson were quick off the mark finishing two fast-break chances to extend the lead further.

The defence still remained the key to the Panthers performance and Grainne O’Reilly continued to contain Straits influence on the game while Hannah Collins pulled some big rebounds on the defensive end. Portlaoise were still well in control heading into the final quarter on a scoreline of 60-25.

The fourth quarter was by far the best for the visitors as they outscored Portlaoise 21-13. With a change of defence by Panthers, the Knights offence punished some poor close-outs as they hit two three-pointers by Strait and Sveda.

Two fine scores by Amy O’Brien and a further three points from Strait finished off the scoring for the Knights. Ciara Byrne was still flying it as she added a further five points to her game-high tally of twenty points with Walker, Blaney, Tomlinson and Wheeler rounding off this excellent team performance to advance to the National Cup semi-final on a scoreline of 73-46.