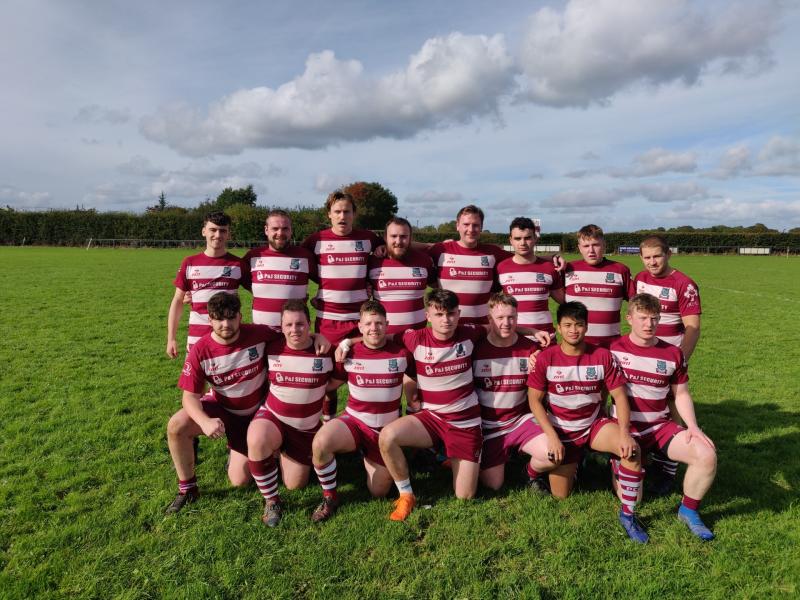 Portarlington’s first team secured a winning bonus point with the last play of the game when Anavil Storey crashed over in the corner for a 30-5 win away to the Dublin Dogos at Sydney Parade on Sunday.

With strong windy conditions on the day it was always going to be whichever team coped the best on the day that would come out on top and that proved to be the visitors.

Portarlington, with the wind to their backs, started the first half with a bang and got a penalty on 2 mins which fullback Evans converted after a fine break by centre Doyle nearly led to an early try. The Dogos looked dangerous when they moved the ball out wide they found it difficult to get field position, and although some of the Port kicks went out on the full, they were consistently able to pin the home side in the right-corner coupled with a strong defence made for a long day for the home side.

Port increased their lead on 21 minutes when Evans again struck from just outside the 22 following an offside at the ruck. This penalty brought the game to life with both forwards picking and driving from close range and with the Dogos scrum-half always a threat.

Port had to be on their guard but they were equal to the task no more so than Houlihan and Mannion at hooker and scrum-half respectively making a huge number of tackles. Bracken in the back row was making a nuisance of himself at the breakdown and with Hunt and O’Connor in the engine room willing to take on the ball at every opportunity, Port were in a determined mood.

However, the home side were not going to roll over, a fine break from their centre brought play into the Portarlington 22 and after a number of phases, the ball was spread wide for the winger to go over, with the conversion coming back off the post.

Port held a slender 5-6 lead with 3 minutes to go until half-time. Right on the stroke of half-time following some fine work from the Port pack with Maher and Oakley knocking back the visitors, an error led to the ball being carried over the try line and from the resulting scrum Doyle went over which Evans converted for a 5-13 half time lead.

Given the conditions and their possession, the Port lads would have been disappointed with their points total but rose to the occasion. Clever use of the ball along with strong tackling ensured the home side could get a footing in the game.

The wind made the lineout a lottery with both sides struggling to control the ball, with the home side edging it slightly but quality ball was at a premium.

It was Port who struck first again, fine work from the pack and with Doyle proving difficult to bring down in the centre, the ball was moved wide and when Storey came across from the right-wing he created the extra man to put Cuddihy over in the corner on 49 mins for 5 -18 lead.

Port continued to put pressure on the visitors, penalties were kicked to the corner and although the lineouts may have been lost, with the Dogos surprisingly trying to run it out rather than kick it, Port were able to keep them pinned in their own 22.

This pressure told when the ball was turned over on 60 minutes and Doyle broke through from close range and ran around under the posts for Evans to convert to put Port 5 -25 in front with 20 minutes to go - and earn an unexpected bonus point.

Try as they might, the crucial score wouldn’t come, promising breaks led to turnovers or penalties. In fact, it was the home side who looked the most likely to score. However, following a turnover and strong running from Doggett on the left-wing, the Port pack rumbled towards the try line and eventually with the clock in red, Storey crashed over in corner. After a brief discussion between the referee and the linesman, the try was awarded and Port left with the full five points on offer.