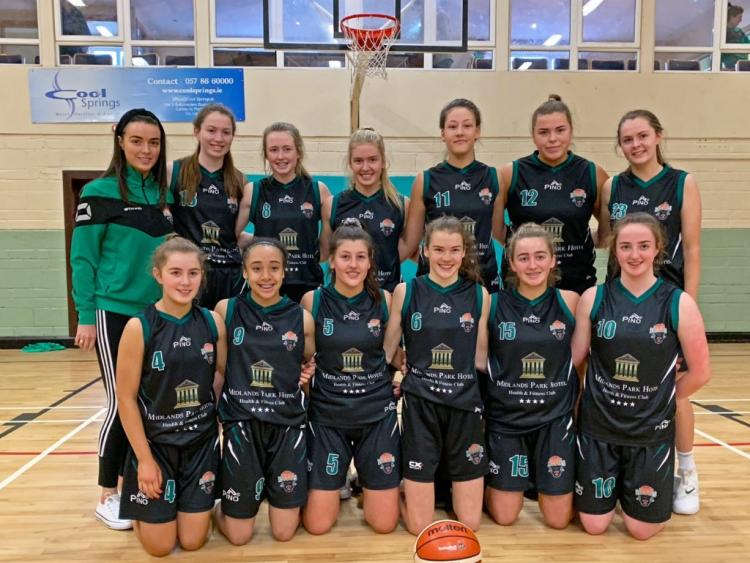 The Portlaoise Panthers U18 girls team took to the floor on Sunday afternoon last bidding to secure a semi-final place in the National Cup.

A good defensive start forced a rushed shot from the away side, Hannah Collins collected the rebound and after a wayward pass Ciara Byrne intercepted a long-range pass to stop a fast break and she backed up this strong defence with a strong stance.

Both teams were settling into the game well defensively but it took over two minutes before the opening score. The first blood went to Tigers as they finished under the boards after an offensive rebound. The girls were unlucky not to finish some fast breaks and were struggling to get off the mark. After over three minutes, Gillian Wheeler broke the drought with a brilliant fast break. Tigers were playing intense defence and the girls had to work hard for everything.

A brilliant tip on from Ciara Byrne set up Sarah Fleming for a fast break and Fleming added a three-pointer within seconds. Hannah Collins picked up an excellent rebound that set up Jasmine Burke for another fast break finish after trailing through the centre of the floor. Tigers then added two from the free-throw line to leave just two between the teams with four minutes left on the clock. A great offensive movement drew a foul to put Jasmine on the line.

At this stage uncharacteristic errors were evident on offense but this was overturned after an excellent inside finish by Collins settled the girls again. Burke drew another foul after Tigers had finished a good fast break and made one. Byrne picked up the rebound from the second and patient play saw Collins pick out Jasmine for a brilliant two points.

Byrne then intercepted the resulting inbound that put Lisa Blaney on the line for two. Another defensive stop saw Blaney pick out Byrne cutting through the centre and Ciara showed great skill to finish under the board. Defensive full-court pressure was working well and the girls pushed the lead out to seven at the end of the quarter.

Hannah Collins was dominating under the boards at both ends of the floor and it was this dominance that resulted in the opening score of the second quarter with another three from Fleming. Ciara Byrne recycled the next offensive play after collecting her own rebound and found Collins with a perfect backdoor pass for an easy two points. Andersonstown responded with a three of their own before Grainne O’Reilly made an immediate impact on the game with a stop on defense followed by two points on offense from a great drive.

Tigers were almost perfect from the free-throw line and made another two from two. Blaney won a great hustle to find Wheeler on the weak side who picked out Jasmine wide open under the board. Maguire was keeping Tigers in touch with another basket but there was still ten between the sides. A brilliant give and go between Jasmine and O’Reilly put O’Reilly open to the board where she was fouled and made the two free throws. The girls found themselves in foul trouble halfway through the quarter and would need to be disciplined. They were very unlucky to concede a three-pointer after a great defence.

Tigers had the game back to six and after a great spell and the game was back in the balance. O’Reilly was showing great confidence and a brilliant fake and drive to the board put her on the line again where she added another. Fleming, having just come back into the game, showed her shooting consistency again making another three before Jasmine added two more after receiving a brilliant bounce pass into the key from Wheeler. The lead was now back to twelve points. Fleming added two more but Tigers were not backing down and added two after a patient offense. A shot clock violation then gave possession back to the away side and they capitalised finishing the scoring of the half. The side took an eleven point lead into half time.

The opening score of the half came from Hannah Collins after what was potentially the best score of the game with all five girls integral in getting the ball from the defensive rebound to the finishing basket. Byrne then made a three-point play after been fouled while putting up a jump shot. A brilliant outlet pass from Collins resulted in a basket by Jasmine. Byrne then stole the ball to add another three-point play. Four minutes in and the lead was now eighteen.

Maguire added three more for Tigers from an inbound play and then added another after collecting their own rebound. Byrne counteracted this with an excellent basket before a great defence forced shot clock violation. The girls found themselves in foul trouble again and Anderstown were starting to eat into the girls lead making another two from the line. A great offensive play by Tigers saw them add three points at the end of a 24-second play and were back to twelve.

The momentum was now with the away side and they had the game back to ten before O’Reilly scored a much-needed basket to help the girls settle again. The game was end to end now with both teams stepping up their game. Jasmine finished an excellent inside move to put fourteen between the sides going into the final minute of the quarter. Tigers brought the game back to eleven before Wheeler hit a buzzer shot. It was all still to play for going into the final ten minutes.

Tigers started the final quarter stronger and got the opening score after collecting their own offensive rebound and then forced a turnover at the other end of the floor resulting in another basket and suddenly they were back to single digits for the first time since the second quarter.

The Panthers girls really needed someone to step up to the mark. Blaney added a much-needed basket before Tigers added two more and there was only seven between the sides. Portlaoise really came to the fore, Wheeler made a great basket under pressure followed by a three-point play from Blaney and were back in the driving seat with a twelve-point advantage going into the last five minutes.

Wheeler then had a huge defensive stop to set Byrne off on a fast break and the hunger was evident. A huge three-pointer by Byrne had the lead out to seventeen points within a couple of minutes remaining. Blaney made a brilliant hook shot after collecting an offensive rebound. With four minutes left on the clock the lead was the largest it had been all game at twenty-one points. Frustration was getting the better of the away side and they were committing lazy fouls. Three more baskets from Wheeler, Jasmine and Fleming put the girls out of sight into the final minute of the game.

This was the final score and they will now prepare and look forward to an All-Ireland semi-final against Brunell in early January.