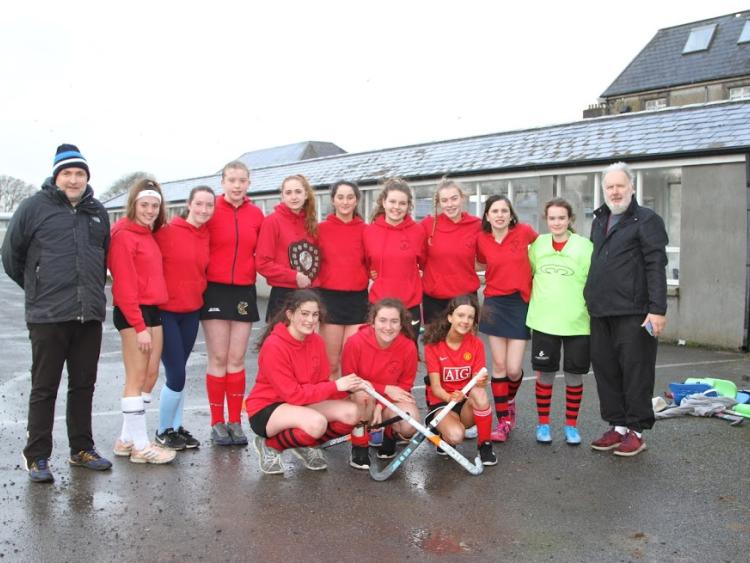 Abbeyleix U16 hockey team won the WL Playoffs on Sunday last to complete a 3 in-a-row. It is a remarkable achievement in doing so with basically different teams over the course of the 3 years.

Having come through the East section of qualifiers that included Wexford, Carlow and Newbridge, Abbeyleix faced up to Mullingar and Tullamore in a double round-robin format with each team playing each other twice.

Mae Looney had the Abbeyleix girls on the scoreboard early against Tullamore, being perfectly positioned at the far post and six further goals flowed in across the four matches they played, with strikes from Emily Brain, Tory Byrne and Aine Duggan.

The pick of them from an Alana Brennan in the last match against Mullingar. But it was not all about the attack as Ava Shirley playing in sweeper role had her fellow defenders of Lauren Mullaly, Niamh O’Sullivan and Laura Vesey working together as a strong defensive unit.

Behind them any nerves that Sarah Talbot had in playing keeper were quickly dispelled as she made some fine saves and kept a clean sheet throughout. Evanna Freeman and Camilla Black in midfield created some great link-up play between defence and attack.

The win is a great boost for Abbeyleix hockey who have been performing very well at WL blitzes in the first half of season at U8, U10, U12 for boys and girls and the U14 in the Extreme 8 matches. The overall success so far this season is no doubt helped greatly by the pre-season Camp in August (supported by Laois Sports Partnership) which had players and coaches well prepared for the new season.