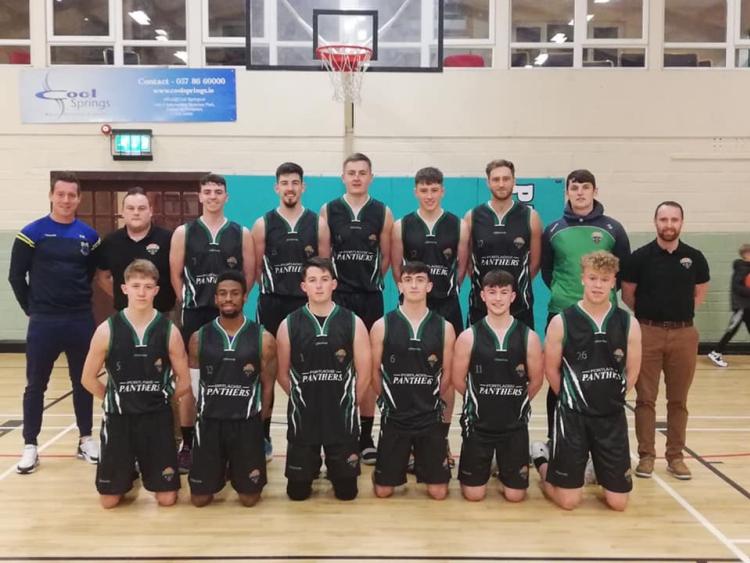 The Panthers lads would start as clear favourites as they sit top of the Midland league table with five wins from five games this season.

Portlaoise started the better with early baskets from Mantas Vilimas and Kyle Burke. Both teams were now playing well, exchanging baskets, Mantas Vilimas went to work inside to get a couple of fine scores. This game was being played at a reasonably slow pace as both looked to set their offensive to create scoring opportunities. Baltai began to miss a few of their opportunities while the away team kept the scoreboard ticking over with fine work from Peter Duignan and Jamie Dooley.
Baltai were eventually rewarded for their good work as they came strong into the game to get a couple of fine scores.

Portlaoise were also making the most of their opportunities with great baskets from Sean Kenny and Mantas Vilimas who got 10 points in this quarter alone to help his team to a 3 point lead.

The first couple of minutes of the second quarter continued much the same as the first with both teams playing well, exchanging baskets, Sean Kenny and Jamie Dooley put points on the scoreboard. The Panthers lads were enjoying themselves at this stage as they went on a 10 point run with baskets from Peter Duignan and Mantras Vilimas.

A time out for Baltai settled them as they came back to get a couple of good baskets but as the game went on the Panthers lads were creating good scoring opportunities with quick ball that was finished by Peter O’Sullivan and Kyle Burke. The half-time whistle could not come quick enough for Baltai as Portlaoise were now in full flow with baskets from Mantas Vilimas and Jamie Dooley to open up an 11-point lead at the break. 39 points to 28 points.

The second half started well for both teams with both putting points on the scoreboard. Kareem Davis and David Glynn kept the away team ticking over with some fine shooting. As the quarter went on they also tightened the defensive end and took more control of the game as Baltai were forced to take some tough shots with Jamie Dooley and Peter O Sullivan rebounding well. The Panthers lads also kept the scoreboard ticking over to increase their lead with fine scores from Kyle Burke and Kareem Davis who put 12 points on the scoreboard in this quarter alone.

Baltai to their credit continued to battle hard for every ball but lacked that final touch when it came to putting points on the scoreboard. Portlaoise, on the other hand, were growing in confidence as they finished with baskets from David Glynn and Mantas Vilimas who was eventually top scorer of the game with an excellent 24 points to help their team to an 18 point lead. 64 points to 46 points.

The last quarter saw Baltai up the tempo with strong man to man defensive in an effort to bridge the gap and they were successful in getting turnovers which resulted in good scores. This was their best spell of the game as Portlaoise seem to lose concentration for a couple of minutes and the gap came down to 10 points but that was as good as it got for the Baltai lads as Portlaoise got back to scoring ways with good baskets from Kyle Burke and a big three-pointer from Mantas Vilimas that seemed to take the heart out of the Baltai run.

Portlaoise went on control the next couple of minutes with good work coming from Peter Duignan and Jamie Dooley. The last few minutes were played out with the Portlaoise boys dominating to maintain their lead with Kyle Burke getting the last couple of baskets to help his team go on to a well deserved win that sees them remain unbeaten at the top of the Midland league table going into the Christmas break with six wins from six games.