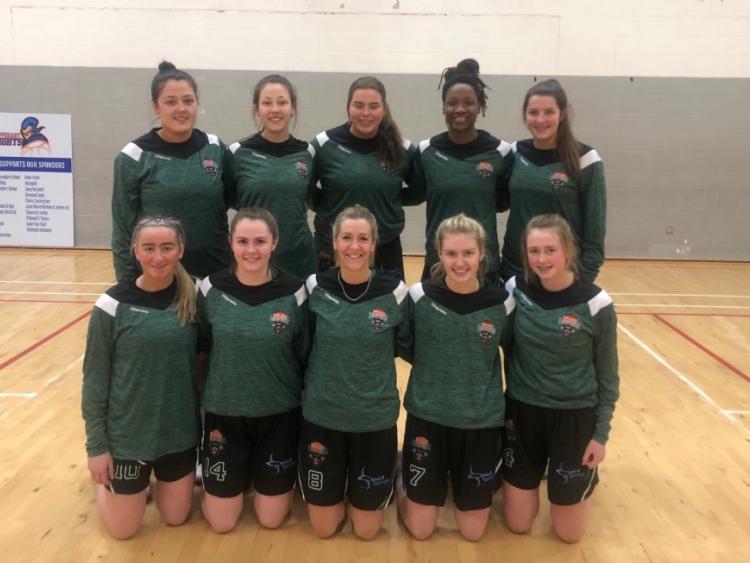 Portlaoise Panthers Ladies team made the long trip north to Jordanstown to take on Ulster Elks last weekend in their latest cross-conference fixture.  Both sides went into the game with identical records of eight wins and one loss so a very tight game was expected. The home side built on their early lead with Portlaoise unable to bridge the gap and despite never giving up on the game, the Elks took the win by eight points in a highly entertaining game.

Portlaoise got off to a good start with a well-taken score from Jasmine Burke.  She added another basket following some great offensive play. Elks looked to their American pair of Alex Posset and Kollyns Scarborough but the Panthers ladies closed out the threat early on but they were hit hard from deep with Aoife Callaghan stepping up to hit her first three-pointer of the game.  A further three-pointer from Posset forced a change in defence for the Panthers side but the visitors continued to struggle to contain an on-form Elks team.

On the offensive end, Portlaoise were clinical from the free-throw line with Gillian Wheeler, Jasmine Burke and Sarah Fleming all 100% from the line. A big three-pointer from Wheeler closed the gap down to a point midway through the quarter but Elks hit fifth gear for the remainder of the quarter.  Erin Maguire and Alex Mulligan drained from deep to stretch out their advantage and Scarborough added six points as she got in under the board. Sarah Fleming, Trudy Walker and Gillian Wheeler all added late baskets after patient build-up play. Elks took a 32-21 lead at the end of the quarter.

The second quarter saw the Portlaoise defence step out and close off the outside threat as they reduced the shot count from beyond the arc.  Help defence was key and Hannah Collins and Trudy Walker were playing a pivotal role in its execution as they closed off the lane time and again.  Walker was beginning to dominate on the offensive end also as she backed down her opponent and finished strongly adding ten points in the quarter. Her threat didn’t go unnoticed as they began to double team her but she found the open Collins twice in the centre and she took advantage adding four points which saw Portlaoise get back to within four points.

Deirdre Tomlinson came into the game and straight away hit a massive mid-range shot as Elks started to strike at the other end. Erin Maguire dropped eight points in the quarter including a buzzer two-pointer to keep their noses ahead on a scoreline of 48-40.

Ulster Elks upped the intensity at the beginning of the second half as they turned over numerous possessions with their full-court press.  Portlaoise found it hard to get the ball over the halfway line and their offence struggled as a consequence. Maguire, Scarborough and Callaghan got on the end of the turnovers to increase their side's advantage.  Portlaoise needed to settle and play a more patient game. Excellent ball movement allowed for open shots and Gillian Wheeler and Sarah Fleming both added their second threes of the game.

Walker and Collins again combined well inside with a further four points each.  But anytime Portlaoise looked like clawing their way back they were dealt hammers blows. Scarborough got inside the defence and finished a three-point play which was followed up by a big three-pointer from Alex Posset. The lead had pushed out to twelve points for the first time in the game on a scoreline of 68-56.

The fourth quarter was another high scoring period with some excellent basketball played by both sides.

Ciara Wheeler got the first three points of the quarter which was followed up by two points from Trudy Walker.  Walker was at the line twice hitting three from four attempts which saw Portlaoise get to within six points of Elks.  This was to be as close as they could get as both sides went basket-for-basket for the remainder of the game.

Sarah Fleming brought her personal tally to fourteen points with five points in the quarter and Ciara Byrne was rewarded for her hard work with the final three baskets for her side.  But Elks just stayed out of reach with Alex Mulligan finding herself open off the help defence and she punished Portlaoise with two late three-pointers.

The Elks held their composure to take the win 88-80 but Portlaoise can take many positives from the game ahead of their National Cup semi-final against Castleisland this Saturday.