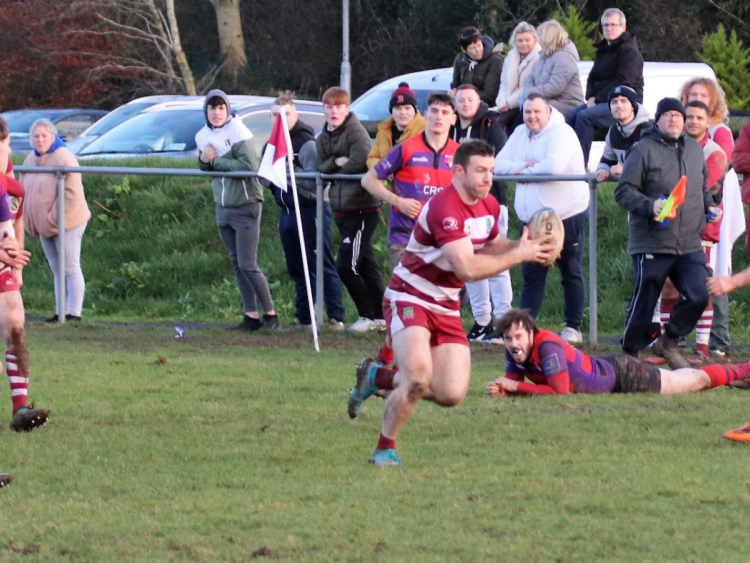 Portarlington kept the pressure on league leaders Roscrea with an 11-try rout of a gamey Athboy side over the weekend.

The Meath side were always up against the odds against having only travelled with 14 players but the scoreline doesn’t reflect their effort and territory they enjoyed but were unable to breakdown a stubborn home defence. Although the weather on the day was perfect for open rugby with both teams having a go, the sticky underfoot conditions made the travelling tough.

Portarlington looking to secure a much-needed bonus point victory and achieved this with 26 mins on the clock with tries from Mulhall on 11 minutes, Evans on 14 and 26, and captain Aaron Ryan on 23 minutes who made a welcome return following injury, all converted by the impressive Evans who on the day finished with an impressive individual haul of 29 points.

Athboy’s efforts weren’t helped following a yellow card on 28 minutes and further tries on the 30 minutes – Doyle, and 39 mins – Mulhall had the home side heading in at the break leading 40 points to nil.

The visitors came out fighting in the second half and enjoyed a great period with the ball but were unable to effect the scoreboard. With Evans registering his hat trick on 46 minutes and Mulhall also earning a hat trick on 49 minutes, it was clear that Port weren’t taking their foot off the throttle.

Having made some changes at half time, Portarlington emptied the bench and in no means weakened the team with the returning Cormac O’Hora (Laois footballers) and Rory Bracken (travelling) impressive, along with last year’s player of the year James Sherlock.

Mulhall got his fourth try on 59 minutes and Doyle touching down on shortly after, when O’Hora went over from close range on 69 minutes, the referee had seen enough of this one-sided contest and blew for full time.

A huge credit to the travelling Athboy team who were never found wanting for effort and sportsmanship in the game. Portarlington’s next outing is away to the RCSI next Sunday with kick-off in Railway Union at 2.30pm.