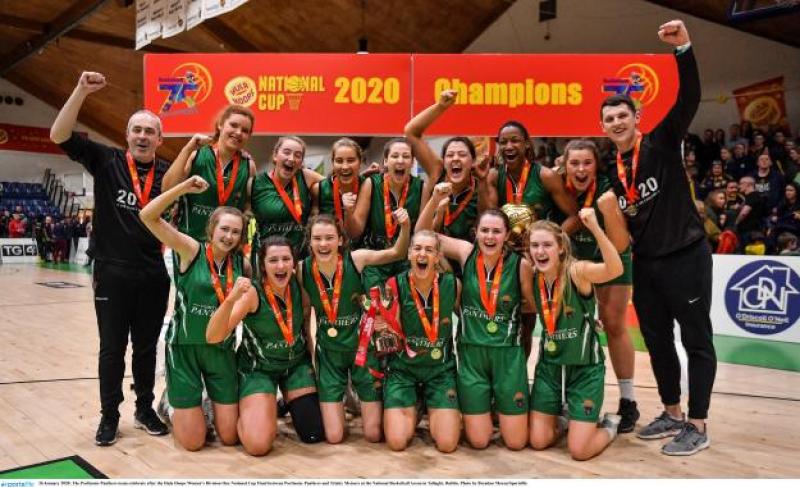 Portlaoise Panthers rounded off a monumental weekend for their club as they claimed their second National Cup title in just three days this afternoon when they stormed home to a 75-71 point win over Trinity Meteors in the Hula Hoops Women’s Division One National Cup final.

The return of Claire Melia at Christmas added an extra element to Portlaoise and it was the inside combination of Melia and MVP Trudy Walker that helped Portlaoise dominate the inside as they outrebounded Meteors by an incredible 41 rebounds. Despite being dominated so dramatically on the boards, Trinity managed to stay in the game to the very end by forcing Portlaoise to turn over the ball consistently through the excellence of Lauren Grigsby in particular. It wasn’t to be Meteors day though and Portlaoise were deserving winners.

The Division One trophy will now head down the M7 where it will join the U18 trophy that Panthers won on Friday evening. More below tweet.

Ciara Wheeler with another triple

The first quarter began with a bang as Ciara Wheeler and Lauren Grigsby traded early scores. Portlaoise didn’t take long to start to exert some early dominance as they started to have success on the inside through Trudy Walker. As the quarter progressed Trudy Walker and Grigsby continued to score for their teams as both sides traded baskets. Portlaoise were playing some excellent defense and had opened a nine-point lead as Melia and Walker found ways to score around the basket. After a Vinny O’Keefe timeout Meteors came back out more composed and finished the quarter strongly as a Lauren Grigsby three pointer left them trailing at the end of one 24-15.

The second quarter followed a similar path as Portlaoise’s inside duo of Melia and Walker were causing huge issues for Meteors. A first half rebounding advantage of 35-16 highlighted the advantage as Melia gathered 14 rebounds to go along with the 10 Walker collected. The dominance on the boards was also telling on the scoreboard as seven different Panthers players scored in the first half with Walker leading the way with 15. Meteors were getting scores from Grigsby, but no other scorer was emerging as Sarah Kenny was limited to three and Edel Thornton five. At the end of a lower scoring quarter Portlaoise had extended their lead to twelve 40-28.

As the second half got started, Meteors roared into the game with Lauren Grigsby continuing her dominant performance offensively. Ten early points for Grigsby dragged her team back into the game but Portlaoise were still answering from the three-point line with Wheeler impressing. Things weren’t going Carolyn Binder’s way for the majority of the first half, but she sprang into action mid-way through the third with back to back steals and fast break layups forced a Portlaoise timeout. Coming out of the break more good work from Binder and a huge Edel Thornton three had the lead back to just three points with five minutes to go in the quarter. Ciara Byrne came up with a big mid-range jump shot to settle Portlaoise but Edel Thornton answered with a beautiful drive to the basket.

Walker with the fade-away finish

Meteor’s defensive pressure was causing turnovers and Kate McDaid was doing excellent work restricting Walker inside. Sarah Kenny, who had been quiet offensively, then stepped up with a huge three pointer to draw the teams level with 2.30 to go in the third. Panthers were looking for answers and again Ciara Byrne was there to deliver as she gave Portlaoise a two-point lead. Meteors aggressive pressing was still working though and with a minute to go in the quarter Grigsby forced a turnover and found Thornton for another tying score. Both teams traded free throws in the final minute, but it was Portlaoise who came out of the action with a slender two-point lead 58-56.

Trudy Walker continued her impressive display in the fourth, as she scored six off Portlaoise’s first eight points as they opened back up a lead. Lauren Grigsby was still scoring well but Meteors were forced to call a timeout trailing by seven 66-59. A big Ciara Wheeler three extended the Portlaoise lead to ten but Sarah Kenny was on hand with a big long-range reply to narrow the lead back to seven with five minutes left to play. The Trinity duo of Binder and Grigsby again delivered, and the lead was back to just three as Portlaoise continued to turn the ball over.

Burke with the finish in the paint

With two minutes to go in the game Sarah Kenny again stepped up and a huge three drew the teams level on 69 points apiece. Portlaoise responded by going inside to Claire Melia who got to the free throw line and gave her team back a two-point lead. Meteors had good looks at the basket but couldn’t score and it was up to Irish international star Claire Melia to close the game out on the free throw line as Portlaoise won out 75-71.

Trudy Walker with the rebound and finish❗️

Speaking afterwards, head coach Peter O’Sullivan said: “That was a brilliant performance, a brilliant day and a brilliant weekend! The U18s make up so much of our senior team and it’s great to have the experience of Deirdre Tomlinson, Claire Melia and Trudy Walker to add in. It’s a massive achievement for the club - two National Cups in one weekend - and it’s been building and we are just delighted to get the two wins. We tried to keep calm as we have a lot of young players and this big occasion, it has been tough. We knew they were going to throw everything at us going in at half time, but they shots the lights out. It was cool calm and collected inside with both Trudy and Claire down the stretch. It’s been a brilliant club experience, from the crowds that have been here too.”