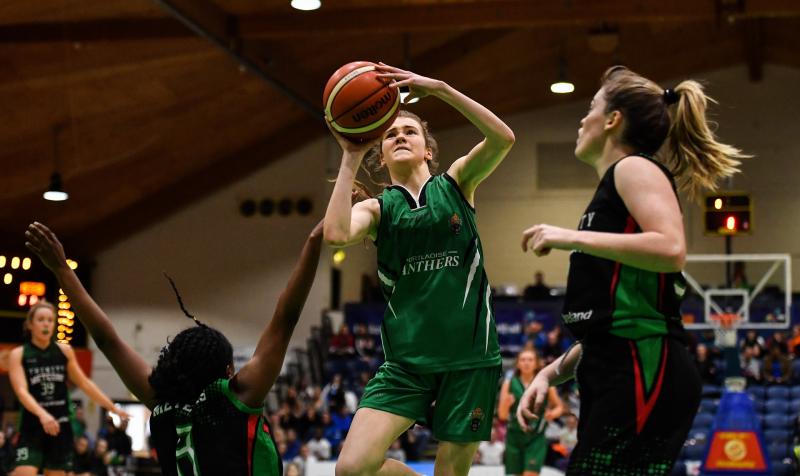 The Panthers Ladies were hoping that history wouldn’t repeat itself as previous results hadn’t gone their way in the past after winning the title. A slow start was quickly overturned and once in their groove, the Panthers side capitalised on every opportunity given to them to take another important win.
Huskies were clinical at the start of the game as they scored off their first three offences hitting two three-pointers from Bethany Thompson and Summer King with a Megan Buckley lay up in between.

Portlaoise were slow to find their rhythm in offence but eventually got off the mark courtesy of a turnaround shot by Trudy Walker. The home side continued to be efficient on the offensive end and made it hard for the Portlaoise women to get a foothold in the game early on.

After some missed shots from outside, Gillian Wheeler began to penetrate the middle of the defence and converted a three-point play before adding another four points after some further determined play. Jasmine Burke came into the game and was rewarded with two well-taken scores for his quick movement up the floor getting position inside the key. Claire Melia finished the quarter scoring as she rattled off seven points as she powered inside to give her team a three-point lead on a scoreline of 24-21.

A change to a zonal defence proved to be the perfect adjustment as UL struggled from distance and Portlaoise worked hard to limit chances inside the key. Grainne O’Reilly and Ciara Byrne were clinical in offence and Walker began to dominate inside with four baskets and three converted free throws.

Sarah Fleming got Panthers first three-pointer of the game and Shauna Dooley stepped up late for another three-pointer on her first National League appearance of the season. Huskies had some luck during the quarter as Summer King got inside the Portlaoise cover to score four points and Megan Buckley added a further four points on the break. Portlaoise had rotated through their eleven strong game squad and took a twelve-point lead at half-time on a scoreline of 45-33.

The third quarter was similar to the start of the first as the Huskies went on a 9-0 run with King converting a three-point play while Emilie Hamel drained two threes in a row from the corner. The lead was down to just three points but Walker, Byrne and Melia sprung into action putting ten unanswered points on the board. Melia and Ciara Wheeler went for a perfect four from four at the line to extend their side lead even further.

UL remained in the game through the sharpshooting of Hamel who added a further two three-pointers to her game tally, all in the third quarter. But Portlaoise were well and truly in their groove and added some lovely scores through Jasmine Burke and Sarah Fleming. The score at the end of the third was 69-51 with Panthers well in control.

Scores were traded by both teams early in the fourth with Orlaith Woods getting to the hole and Melia replying in kind at the other end. Fleming added another layup and three-pointer before Byrne became unplayable with four baskets in a row forming part of a ten-point final quarter haul. Shauna Burke shot one from two at the line and Hannah Collins banked in a shot meaning all eleven players got on the scoresheet. Sarah Fleming added her third three of the game with Grainne O’Reilly getting the final basket of the game just before the buzzer to give Portlaoise another deserving win on a final scoreline of 91-62.

Portlaoise return to St. Mary’s Hall on election Saturday with a 6pm tip-off needed as they take on Tipperary Knights in a must-win game in their challenge for a play-off spot in March.