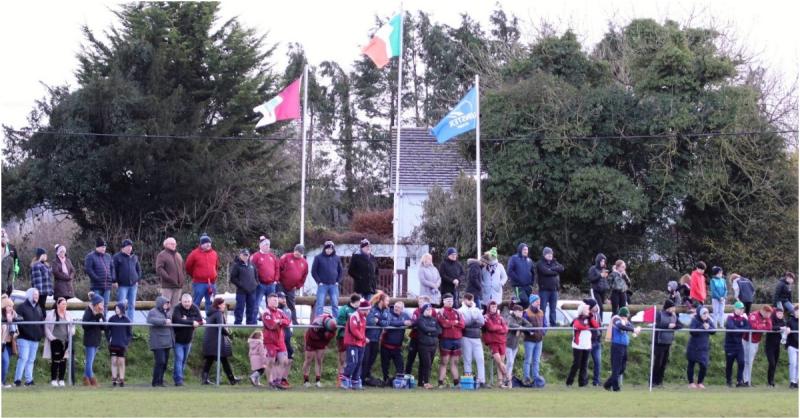 In a game that may decide who will ultimately be crowned the Leinster League Division 3 champions, it was the visitors, Roscrea, that deservedly came out on top following a tough battle.

Although Portarlington remain on top of the league table, Roscrea have a game in hand and are currently unbeaten heading into their remaining games.

With 1st-place playing 2nd it was always going to tight affair, Portarlington had the advantage of a strong breeze in the first half and showed early promise in moving the ball. Strong carries from the pack with the Aaron’s, Maher and Ryan, along with O’Connor, Hunt and Houlihan at the forefront but Roscrea were not to be found wanting in defence and were always a threat of turning over the ball which they did on numerous occasions - despite the superb clearing out from hooker Murphy and scrum-half Mannion preventing more.

Scoring chances were limited in the early exchanges, Evans was just wide with a penalty on 22 minutes,  before following a loose kick. Roscrea broke down the field and following a passage of play earned a penalty and duly took the lead on 26 minutes.

Port came back strong from the restart and when Roscrea were pinged for offside, Evans levelled the scores. Roscrea were now coming more and more into the game, they had effective ball carriers in their tighthead prop and No 8, who were a constant threat and with their out-half marshalling the backline, the Port lads knew they had to be on their guard.

This pressure eventually told and some fine handling in the back line put the winger in the corner for the opening try, with the conversion missed Roscrea led 8-3. Roscrea continued to make all the running and despite some great probing kicks from Mannion and out half Hyland, Port were finding it hard to get a foothold in the game.

Mulhall and Doyle in the centre were causing problems for their opposite numbers but the Roscrea back row was always on hand to either spoil or turnover the ball and prevent any scoring opportunities. However, despite this, Port did go in at half time in front.

With Roscrea on the attack and their backline having a potential overlap, Hyland managed to intercept the pass and although he didn’t have the legs, winger Storey was on hand to take the pass and race clear to score under the posts and give Port a 10-8 lead at the break.

Roscrea came out firing in the second half and with the advantage of a strong wind, they pinned Port back at every opportunity, despite the best efforts of Oakley and especially Houlihan who mopped up a lot of loose ball.

With Port finding it more and more difficult to exist inside their 22, the pressure led to a penalty for holding on which was converted to give the visitors a 10-11 lead. This lead was extended further when a lineout was driven over and Roscrea led 10-16.

Both teams were giving it their all in what was a titanic struggle, now being played in terrible conditions in front of a large crowd that came to watch the top of the table clash.

Try as they might Port just could not break through a stubborn Roscrea defence, but in the conditions showed some excellent handling. The pressure eventually told and while trying to the run the ball out of their own 22, they gave away a penalty. The initial effort was missed, but a further opportunity was presented a few minutes later and the Roscrea winger duly converted for a 10-19 lead.

This was to be the final score but the Portarlington lads should be commended for their efforts and continued to battle to the end. Port’s next outing is at home to Clane this Sunday with a 3pm kick-off.