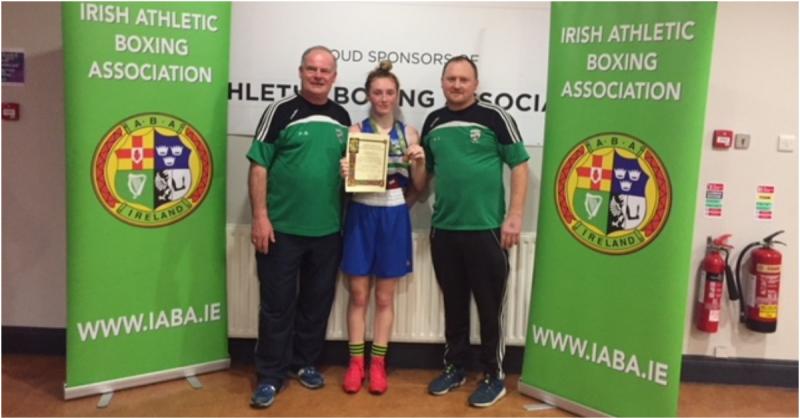 For Rachel to win this title, she had to deliver two top-class performances. In her semi-final bout her opponent was Nicole Clyde, the Ulster champion and reigning National champion. To get a result here, Rachel would have to bring her 'A game' to the ring, and she did just that.

Nicole Clyde was beyond doubt one of the toughest opponents Rachel had met so far in her career. Nicole had the advantage of being a year older and possibly a shade more in the physical department. However, this would not faze Rachel. She knew this contest was going to be her litmus test, and it was.

Her preparation for these Championships was tailored for her needs. Rachel’s sacrifice, commitment and dedication were commendable. Two months of early morning runs and walks with her father Ray, also one of her coaches, and her mother Eimear. Lawless logged ten to twelve sessions per week in the build-up to ensure on the day of the competition she was ready.

During the contest, Rachel showed wonderful composure as she boxed on the back foot.  She implemented the coaches’ plan to perfection and created space, angles and her shot choice and combinations were very well and executed.

After three rounds of non-stop boxing, the decision at the end of the contest was in Rachel’s favour by unanimous 5-0 decision.  This was Rachel’s first time to box over the 3x3 minute rounds and she displayed all the qualities to perform over this duration.

Her opponent in the All-Ireland final was none other than Chloe Gabriel from the Mulhuddard Boxing Club in Dublin, the reigning European Female champion.

This final was undoubtedly one of the most talked-about contests of the evening. Both boxers had huge support, creating a great atmosphere in the National Stadium. Rachel’s final was the third bout on the program card.

When the bell rang for the start of the first round, Rachel made her intentions known with a quick three-punch combination attack.  She certainly caught her opponent off-guard and surprised her with the accuracy of her punches.

Her South Paw counterpunching and continuous teasing feints saw her on top in the exchanges. Rachel displayed multiple skills, and showed her class throughout the entire contest. Her ability to implement the plan devised by the coaches, was the main factor in her victory.  Her ring craft and was excellent. Her attacking skills, footwork, defence mechanism and counter-attacking skills on the night were superb and she was full value for her win on the night.

“Rachel had to do three things on the night. Win against a European Champion. Win a National title. Make history. She achieved all three. A remarkable achievement,” said Head Coach Pat Ryan.

Rachel will now join the National panel and will be in pole position for selection to represent Ireland at the European Championships in Montenegro in March 2020.