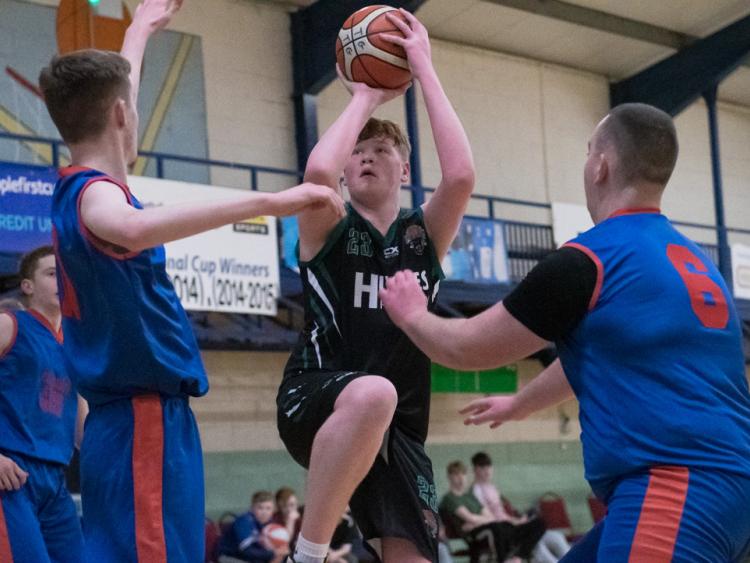 Kristian Gormley, Portlaoise Panthers, about to throw for a basket against the Kildare Gliders at St. Mary's Hall. Photo: Denis Byrne

The home team hit the ground running with the first few baskets coming from Christian Gormley and Glenn Comerford. Portlaoise settled into the game the quicker of the two sides and were rewarded for their good work from Tom Gbenoba who rebounded everything that came his way and started a couple of fast breaks that ended with baskets from Darragh Beere.

As the quarter went on both teams were now playing well, exchanging baskets. Glenn Comerford finished off with scores after good work from his teammates Astijus Zemaitis and Sam Wynne to see Panthers to a 4 point lead at the end of the first quarter.

Portlaoise continued to play well keeping the scoreboard ticking over with baskets from Sam Wynne and Astijus Zemaitis. They were now dominating the game with fine shooting from their Captain Glenn Comerford and as the halftime whistle approached they extended their lead to 8 points with good performances from Sam Wynne and Luke Thompson.

The second half turned into a good running game with both teams playing well, exchanging baskets, Portlaoise got scores from Tom Gbenoba and Luke Thompson after good work from Glenn Comerford. As the quarter went on Portlaoise upped the tempo of their defensive that caught the Gliders lads off guard and the ball was turned over on a number of occasions to get good baskets from Conor Gormley and Darragh Beere.

The Panthers continued to work hard on the defensive end through Luke Thompson and Astijus Zemaitis while Kristian Gormley kept the scoreboard ticking over to see him eventually top scorer of the game with an excellent 12 points.

The last quarter saw Panthers come out with the attitude of what we have we hold, they slowed the game down going through their offensives and were very patient waiting for the right opportunities that saw Glenn Comerford finish with baskets. Kildare to their credit never gave up battling for every ball and were rewarded with some fine scores to reduce the gap to 6 points but the Panthers lads held their nerves as they worked the ball in the offensive resulting in a couple of vital baskets from Sam Wynne to maintain their lead.

The last couple of minutes was a stop-start affair with the fouls mounting up on both teams but that all suited the Portlaoise boys as they showed great composure to go on to hold out for a hard-fought and well-deserved win.