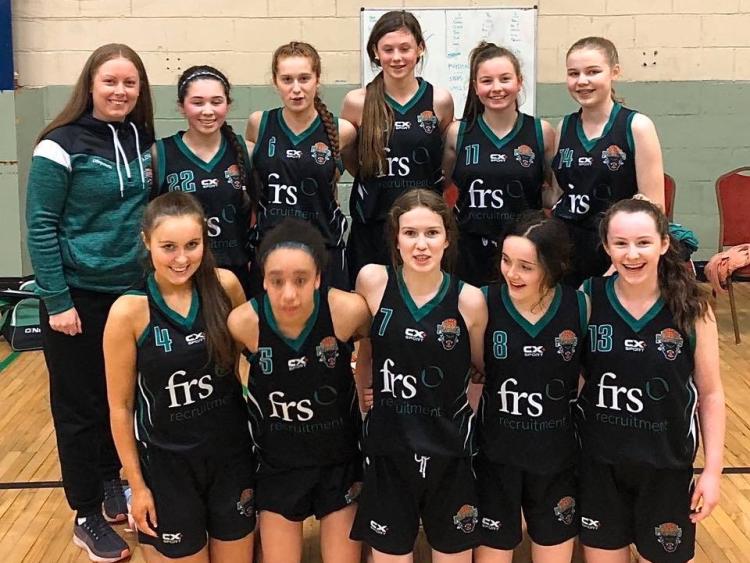 With the season coming to the business end of things and the league very much in the balance with only 4 points separating the three teams fighting for AICC qualification, this game was a must-win for the Portlaoise Panthers U16 girls.

It was going to be a battle having suffered a comprehensive defeat to the travelling side in the opening game of the league.
The Panthers girls started the game well, winning possession from the tip-off and were very unlucky not to capitalise. Although the girls weren’t doing a whole lot wrong, they found themselves trailing 7 points to 1 halfway through the quarter.

A timeout and change in defensive tactics saw the game start to turn and the gaps in defense were been closed off. A huge increase in intensity by the girls resulted in Athlone needing to rethink their plays. Rachel Byrne opened the scoring with a free throw after been fouled while driving to the board, she followed this up with a brilliant basket after Neassa Towey picked her out on the fast break. Ella McNulty had the mammoth task of defending their point guard but she was excellent and was forcing her into making wayward, rushed passes.

The girls needed to maintain this momentum into the next eight minutes. The game was end to end with both teams playing very strong defensively. Byrne picked up the opening score after Umeh powered out from a defensive rebound to find Rachel open on the fast break. Asling Fleming was playing a hugely important role and was collecting rebounds that any post player would be proud of.

Towey, who had an inspirational game was starting to find her positioning on offense and wasn’t afraid to take the ball to the board. She scored an excellent basket to counteract an Athlone score on the other end. Umeh who was now dominating on all ends of the floor picked up 5 consecutive points and then exchanged two more with Towey.

The defensive pressure applied by McNulty and Byrne was pivotal in these baskets. Aoibheann Dalton, when introduced into the game, got straight into it and picked up a crucial defensive stop. The girls had turned the deficit at the end of the first and now held a slender one-point lead at half time.

The second half continued in a very similar fashion with both teams still showing great determination. There was only two points separating the teams again with Athlone now swinging the lead back in their favour to lead by on at the end of the third.

Caoimhe Sweeney had her best performance when introduced she picked up great defensive rebounds and when the girls went four points down hit a crucial mid-range shot after a well-worked offensive. The girls were playing with great patience and although Athlone were picking up baskets to counteract the Panthers, they never once panicked or let it faze them. An all-around good team performance in the third quarter left everything to play for going into the final eight minutes.

The girls knew the importance of this game but didn’t let it take over on the floor. This game was going to go right down to the wire and was going to go in favour of the team who wanted it more. Athlone picked up the first score to put themselves in the driving seat before two huge defensive stops opened up the floor for fast breaks which Byrne duly finished. Then a lapse in concentration from Athlone on their own inbound saw Umeh intercept the pass and put the ball into an open basket.

The Panthers girls now had the momentum and Athlone were frustrated. A timeout from the away side allowed us to ensure that we remain composed and although we were 5 points up there was still nearly three minutes to play and things could turn very quickly. Thankfully this wasn’t the case and the girls continued to apply immense pressure and capitalised on turnovers. They added a few more baskets from McNulty, Towey and Byrne.

This was an excellent composed performance from the girls and their best to date this season. Things are coming together well at the right time and they have left themselves in a really good position to get that qualifying spot with just one game remaining.