Midland Masters basketball teams get season off to a successful start 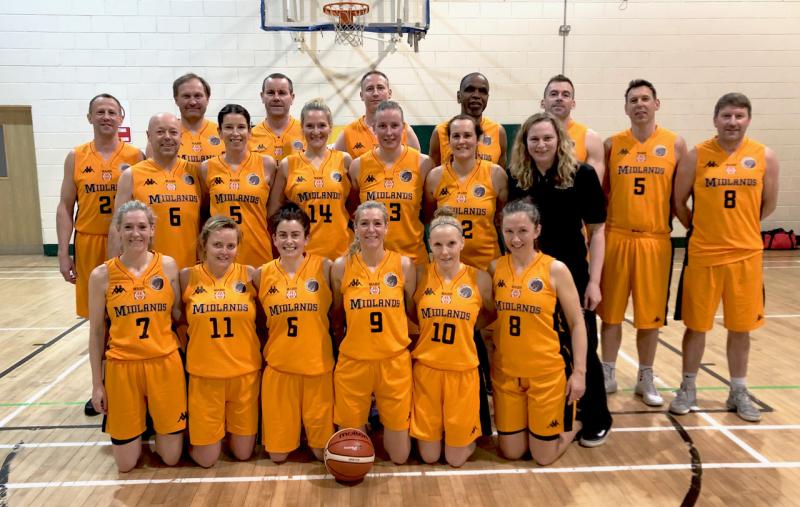 The Women’s and Men’s Midland Masters teams both headed to Kilkenny last weekend to compete in the opening tournament of the masters season.

The women’s team, having competed and won the 2019 tournament, had their opening game on Friday night against Cork Cougars. The game was frantic and with tournament rules to get used to the women lacked a bit of their usual composure, however, despite this they secured their first win by 5 points.

Bright and early on Saturday morning, the men’s team were making their debut on the Masters circuit and, with a few injuries on the team, they recruited players nationwide including basketball legend Jerome Westbrooks who originally hails from the USA and from legendary status playing basketball in the 1980s. Now 62 years old, he showed no sign of slowing down. The men won their opening game comfortably against Waterford beating them by 18 points.

Day two arrived with a double-header in store, with both women’s and men’s teams playing back to back for their second round of basketball. The women were first on the timetable, their opponents a solid Rockets side from Dublin. In this game the women showed their experience of playing and training together for the past 12 months, there was fast ball movement, fast breaks and everyone was on shooting form.

Attracta Phelan, Jean McEvoy, Catherine Ashe and Pam Grogan were clocking up points from the guard positions with Jackie Coleman, Edel Folen and Claire Folye backing them up with inside points. Twin sisters Deirdre and Grainne Tomlinson’s speed were no match for the opposition with both sisters running the floor and drawing fouls along with plenty of baskets leading from the front Olive Maher pushing the ball the women won comfortably 38-18 points.

Straight after, the men played their second round game against another Dublin side, St. Marks. Captain Rody McEvoy took control from the onset with himself and guard Tommy Costello pushing from the front. It was a physical game but with strength inside from Ger Egan, Anthony Dunne and Alan Burnell’s astounding strength and jumping ability their speed blew their opponents away.

Solid scoring from Gediminas Simkus, Barry Ryan, James Mulhall and holding the defence at the back keeping it together was Jerome Westbrooks. Kaspars Abrams made his presence known by rebounding strongly inside and running the floor hard. The men recorded a comfortable win of 26 -17.

Sunday brought the semi-finals, and yet again the women were up first meeting St. Brendan’s in a very physical game. On the perimeter, the women fought hard but yet again Deirdre Tomlinson’s hard drives to the basket whilst also drawing fouls kept the opposition at bay. Sunday also saw the reintroduction of Anna Connolly having picked up a calf injury on Friday night. Anna’s presence on the court was a huge difference to the women’s side with her demand of the centre court and rebound abilities helping the women to a 12-point win.

The men’s semi-finals was always going to be tough as their opposition, Carlow Rock, are known for their physical games along with outside shooting prowess. Carlow Rock didn’t let their reputation down, they came out of the blocks clocking up scores. However, the midland men fought back with everything they had.
The inside play is where the battles were lost and won, with blood, sweat and tears being drawn to win every rebound possible. The Men finally settled into their offence and with a tight battle in every quarter, they finally pulled away with the lead and ultimately won the game by 8 points.

On Sunday afternoon, the finals arrived. The women faced their old opponents from the 2019 final, Dublin All-Stars. It was always going to be a big battle from the off. The women struggled to settle against a physical Dublin side but pulled away with a 6 point lead going into the 3rd quarter.

With some vital substitutes, Dublin fought back hard and brought the game to 19 points apiece. Unfortunately, Pam Grogan missed a shot with one second to go, ending the game in a dead heat. Kilkenny Masters rules state that in a tie situation there is a sudden death decider with one team member stepping up to the free-throw line from each team.

Catherine Ashe was the heroine on the day and stepped up on behalf of the Midland women. Despite her heroic efforts, Dublin won on free throws with the game finishing 20-21 seeing the Midland women losing out by a whisker.

A defeat for the women, but now it was the men’s turn to face Killarney in their cup final. Killarney held a small bench, but their fitness was apparent throughout the tournament. Tiredness was kicking in on the Midlands team, but despite this, the men were ready to play.

Killarney were straight out of the blocks from the throw-in. The Midland men were slow to start and were missing Ger Egan inside on finals day, and despite the second quarter being filled with uncountable turnovers, the men kept their own.

Jerome Westbrooks played a stormer on defence to keep Killarney’s top player at bay. Tommy Costello hit some vital outside shots in the third quarter, bringing the game yet again to neck and neck.

At 21 points apiece, captain Rody McEvoy hit a big outside three-pointer to pull away with a small gap. In the dying minutes, the Midland men picked up their intensity with Alan Burnell pulling some super rebounds from the boards. Duo Tommy Costello and Rody McEvoy pushed the men over the finish line and were triumphant in lifting the Kilkenny Masters Men’s title. Rody McEvoy lifted the coveted trophy and Tommy Costello picked up MVP on the day.