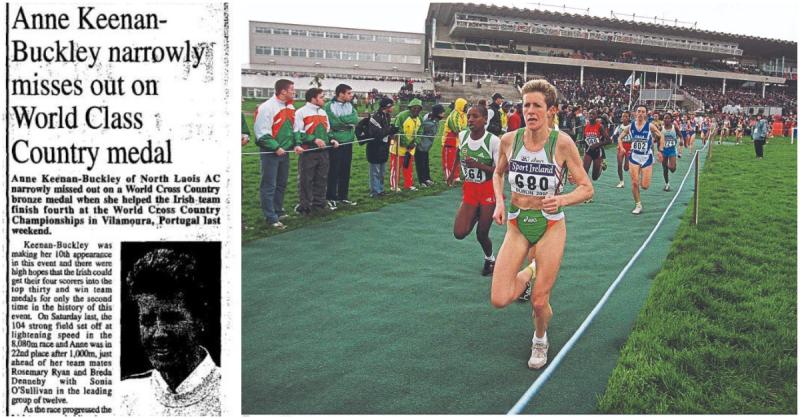 *This article was published in The Leinster Express on March 25, 2000

Keenan-Buckley was making her 10th appearance in this event and there were high hopes that the Irish could get their four scorers into the top thirty and win team medals for only the second time in the history of this event. On Saturday last, the 104 strong field set off at lightning speed in the 8,080m race and Anne was in 22nd place after 1,000m, just ahead of her team mates Rosemary Ryan and Breda Dennehy with Sonia O'Sullivan in the leading group of twelve.

As the race progressed the Irish team were holding down third place but Anne was feeling the effects of the 75 degree heat. In the last lap it was clear to see that she had given her all and was really struggling as she lost several places. She eventually crossed the line exhausted in 47th position in a time of 28.04. With Sonia O’Sullivan in 7th, Rosemary Ryan in 20th and Breda Dennehy in 27th there was faint hope that Ireland may have got the bronze medal but alas it was not to be, as the USA just pipped Ireland by 3 points, 98 to 101.

Anne was very disappointed after the race but it must be remembered that it was ber highest ever finish in the long course race and it is a fair indication of the sort of form she has shown this winter that she should feel that way.

There was no doubt that had the race had been held in a cooler climate, Anne would have finished much higher. Ireland's other team members were Maria McCambridge and Valerie Vaughan who finished 80th and 87th respectively. Vaughan had to be treated for heat exhaustion at the finish of the race, as had many competitors including Britain's Paula Radcliffe who finished fifth. The race was won by the 1992 Olympic 10,000m champion Derarty Tulu of Ethiopia, ahead of her teammate Gera Wami, who was the defending champion.

Ethiopia won the team event ahead of Kenya, USA and Ireland. Ireland were the lop European team ahead of Spain, Great Britain and Italy. Having finished 22nd in the (4km) Short course event in Belfast last year, Anne decided to run this race also accompanied Sonia O’Sullivan and Rosemary Ryan to the start of the line on Sunday morning. Once again, this race was in very hot conditions (76 degrees) and Anne ran a good solid race to finish 67th. Given the tough race she had the day before this was an admirable performance. She finished just 56 seconds behind the winner.

An indication of the depth of talent in this race was the fact that last year when she finished 22nd she was 53 seconds behind the winner. The team competition in this race was ferocious and even the Kenyans could not win team medals, when Portugal scoring a very popular home victory ahead of Ethiopia and France. Sonia finished a disappointed 15th while Rosemary again ran brilliantly to finish 28th. Sonia said after the two races that she could not believe how fast the pace was. She also felt that the standard has never been higher, sentiments that were echoed by Paula Radcliffe, who went on to finish fourth in the Short Race (4,180m).

Anne Keenan-Buckley can hold her head high this season. She has run brilliantly all season, foe highlight being her stunning victory in the National Cross Country Championship at the age of thirty-eight. After a short race she will start her training for track season where a place on the 5,000 starting line at the Sydney Olympics will be her goal. Well done, Anne, you have done your club, country and family proud.