Remember When (2006): Portlaoise boxers come out on top to secure three National Titles 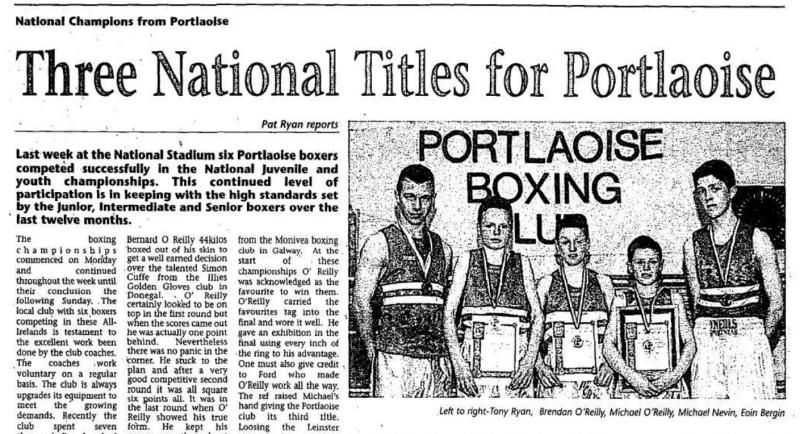 *This article was originally published in the Leinster Express on May 3, 2006

At the National Stadium, six Portlaoise boxers competed successfully in the National Juvenile and youth championships. This continued level of participation is in keeping with the high standards set by the Junior, Intermediate and Senior boxers over the last twelve months.

The boxing championships commenced on Monday and continued throughout the week until their conclusion the following Sunday. The local club with six boxers competing in these All-Irelands is testament to the excellent work been done by the club coaches. The coaches work voluntarily on a regular basis. The club is always upgrading its equipment to meet the growing demands. Recently the club spent €7,500 on the purchase of a new competition ring. Its purchase has certainly proved dividends for the club this year. With five boxers getting to the All-Ireland finals reaping the benefits from training in a competition size ring to full advantage.

In the Boy 1 category Michael Nevin, 33 kilos, had a very good semi-final against the Ulster Champion Tieman Byrne from the Clones boxing club where former world featherweight champion Barry McGuigan trained. His opponent in the final was Sean Doyle from the Gorey Boxing Club. This was a cracker of a contest. After every round the scoring was level. At the final bell and with both boys almost exhausted, it was still level pegging. The only way to separate them was to ask the five judges to press the button in favour of the boxer they felt had done enough. The judges’ decision came down in favour of Nevin 3-2. Nevin’s hand was raised and he will get the chance to defend his title next year.

In the Boy 1 category, Bernard O’Reilly, 44 kilos, boxed out of his skin to get a well earned decision oyer the talented Simon Cuffe from the Lilies Golden Gloves club in Donegal. O'Reilly certainly looked to be on top in the first round but when the scores came out he was actually one point behind. Nevertheless there was no panic in the corner. He stuck to the plan and after a very good competitive second round, it was all square six points all. It was in the last round when O'Reilly showed his true form. He kept his composure throughout and used his jab to full advantage. In the last round he executed three excellent combinations getting the better of the exchanges and giving him the edge. The judges gave just reward to O'Reilly making him a three point winner over a very gallant opponent, putting him into the finals. His opponent in the final was Garry Sweeney from All Stars boxing club in Derry. In the first round the pace was slow and at the end of the round they were all square. The second round O'Reilly stepped up a gear and there was only going to be one winner at the end. O'Reilly won by five points and the second national title for Portlaoise.

In the boy 2 category, Michael O'Reilly boxing in the 39 kilos, is the older brother of Bernard O'Reilly. Michael's opponent in the semi-final 'was Edward Corcoran from the Mark Heagney Boxing Club. O'Reilly, being favourite to win these championships, showed his class and after two rounds the Referee intervened and stopped the contest in favour of O'Reilly putting him into the final. His opponent was Kieran Ford the Connaught champion from the Monivea Boxing Club in Galway. At the start of these championships, O'Reilly was acknowledged as the favourite to win them. O'Reilly carried the favourites tag into the final and wore it well. He gave an exhibition in the final using every inch of the ring to his advantage. One must also give credit to Ford who made O'Reilly work all the way. The ref raised Michael's hand giving the Portlaoise club its third title. Losing the Leinster championships last year gave Michael a greater desire to win this year.

Tony Ryan the Boy 4 contestant, 66 kilos, represented Portlaoise and delivered a top class performance against a very tough opponent Bernard McDonagh from the St Ann's Boxing Club in Westport, Mayo. Ryan was two points down after the first round but came back well in the second to make it all square going into the last round. Ryan forced the issue coming forward with hands high and good defence connected with a couple of good combinations to win on a count-back twelve points to ten. This win gave Ryan a major boost going into the final in his first year of competition at this level. His opponent in the finals was the four times Connaught champion Michael McDonagh who was also out-pointed twice in two All-Ireland finals.

Certainly, McDonagh had the pedigree and after the first round Ryan was trailing by two points. In the second round, Ryan put more purpose in his boxing and got the benefits to keep the score at level pegging going into the last round. It remained level until the last fifteen seconds. There were a number of exchanges from both boxers, and possibly the contest could of went either way. Unfortunately for Ryan, he was extremely unlucky to lose a very closely contested final by a very narrow margin, one point. However, the future is bright for Ryan who In his first year of boxing and will have learned from the experience. Ryan has all the attributes and hallmarks to succeed. He is quick, physically very strong, thinks well on his feet and has the desire. What he needs to do now Is be patient and develop all aspects of his boxing and 1 have no doubt he will succeed.

In the Youth 1 52kilos category Owen Bergin, twice Leinster champion and Nine counties champion, had a good organised tactical win in the semi-final over Martin Frazer the reigning Ulster champion. Bergin started slowly and was behind by a couple of points after the first round. In the second round he upped the ante and got some excellent scores to keep him in the contest.

In the last round he was three points adrift. In a contest that was so closely contested, this margin looked out of reach for the young Portlaoise boxer. However, Bergin was in this situation before and came back from behind to win. The question was could he do it at this level of competition. Well he certainly did. Three points adrift and the clock ticking away the round Bergin found the right combinations and eventually won the contest by three points putting him into the final for the very first time.

His opponent in the final was John McDonagh from the Loughmahon Boxing Club in Cork. McDonagh was beaten in two finals and was going to be very determined in the final. The contest, as expected, was very tactical. It was a cat and mouse affair. Bergin, a southpaw, kept his cool and composure and used his southpaw stance to good advantage. He lost the first round by two points. In the second round the pace increased and both boxers scored with some very good combinations. The last round was a very tense affair and possibly McDonagh, having come down from the weight division above made him a little stronger at this weight division, giving him that little advantage to get the result at the final bell.

However, Bergin did very well and was excellent all year and will be a more experienced boxer this time next year. James McDonagh the Portlaoise youth 1 52 kilos boxer was outpointed by two time All-Ireland champion Ruairi Dalton from St Johns Belfast. McDonagh gave an excellent performance and probably should have made the weight division below. If McDonagh could have made the weight division below his he certainly would have been in the shake up for a medal.

It was a long hard week on boxers and coaches who worked very hard to get the boys through the week. However, achieving this level of success is makes the work a little easy. Special thanks to Coaches Jimmy Bergin I/C, Edward Healy, Oisin Kelly, TJ Doheny, David Harney, Daniel Shiels, Jimmy Lawless (main fundraiser) and Pat Ryan who all assisted over the year.

The club would like thank all the people who have contributed to the fundraising events over the past year. Without your help and continued support the club could not achieve this level of success.