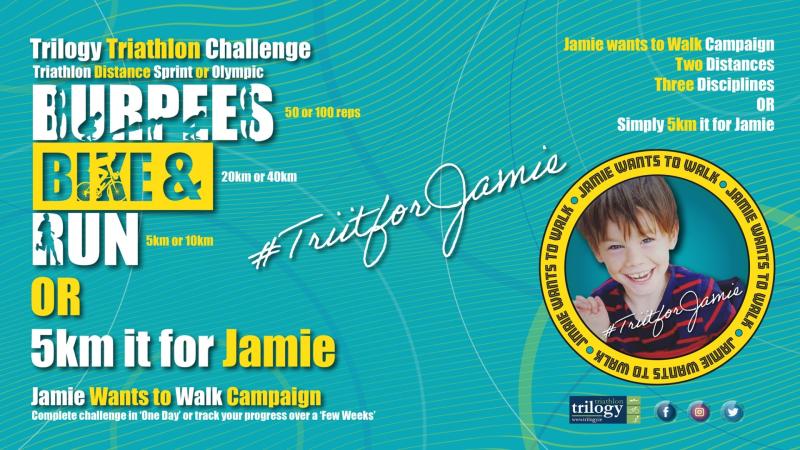 Trilogy Triathalon Club in Portlaoise has completed the first of two back-to-back fundraisers in aid of two Laois families.

Almost a month on since the country came together and Did it for Dan, the young baby boy from Ballybrittas, Co. Laois who captured the nation’s heart, Trilogy Triathalon Club in Portlaoise have completed the first of two fundraisers in aid of two Laois families.

Trilogy Triathlon Club in Portlaoise had planned to do a fundraiser for Dan but got the joyful news that he had reached his target before they commenced.

The committee at Trilogy decided to turn their attention to some other campaigns within the local community, and settled on running two fundraising campaigns back to back.

The first campaign finished on Saturday, May 23 where the club raised money for Timahoe woman Martina Cahill’s Lyme disease fund. The club raised over €1,500 for Martina’s fund and they hope it will help in her endeavours to get the treatment she desperately needs in Germany.

The second campaign began the very next day, Sunday, and will run for three weeks.

This campaign is raising much-needed funds for the Jamie Wants to Walk Campaign. Jamie is an amazing little boy who lives in Portlaoise and will turn 8-years-old in July of this year. To date, his family await his first independent step.

To do this Jamie needs intensive therapy consisting of four hours a day for three full weeks in the Napa Centre in America who have the expertise, technology and equipment to support Jamie in the goal of taking his first steps.

Jamie is nearly halfway to his €50,000 target and Trilogy Triathlon Club are vying to push Jamie's fundraising in the right direction. The club is appealing to everyone to 'Tri-it' or '5km-it’ for Jamie.

Pam Grogan from Trilogy set up the fundraiser alongside her club mate Sharon Roche. Pam said, “I first met Jamie at the school pick up about 4 years ago as Jamie’s older brother, Ryan, attends the same school as my boys.

“I’ve seen all the work Siobhan and Declan have put into Jamie over the years they truly are exceptional parents and are relentless in their efforts to get Jamie the help he needs.”

The Tri-it challenge involves 50 Burpees or Jumping Jacks, a 20km cycle and a 5km walk/run. The challenge does not have to be completed in the one day, it can be completed over the course of a few days or weeks.

The club are encouraging the community in Portlaoise to get involved and possibly even complete it as a family. Ken and Helena Gleeson completed their first triathlon together on Sunday along with their two young boys on bikes! A brilliant achievement for them and the campaign.

The 5km challenge the club are asking people to Walk/Run 5km, donate €5 and nominate 5 people. Since lockdown began, most people go for walks in the sunny evenings or at the weekend and the club is encouraging the public to complete your usual walk/run and donate to the Club’s fundraiser on behalf of Jamie.

Once you complete your challenge, the Club are asking participants to kindly donate directly to the fundraiser on the main Trilogy Triathlon Facebook Page, with every cent and euro going directly to Jamie.

The Laois community came together and did it for Dan, and now they’re regrouping to get Jamie the treatment he needs to take his first step and walk. Check out Trilogy’s Facebook and Instagram pages where the challenge is live at present.

To donate, you can so HERE