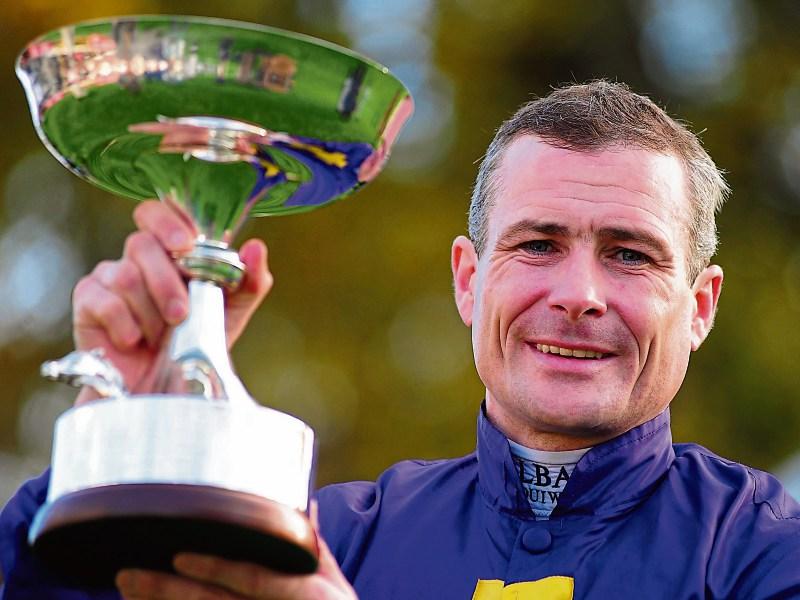 Legendary Irish jockey Pat Smullen has picked an 'amazing horse' that stands at stud in Laois as one of his top six rides.

Pat Smullen has spoken exclusively with Betfair to discuss his career highlights involving his favourite horses. He chose Famous Name at number six under the heading ‘The best horse that never won’.

Famous Name, which now stands at Anngrove stud in Mountmellick owned by Alastair Pim, was anything but a looser. And, as Pat explains, not winning the big one opened the door to a glittering career which resulted in more than €1 million in prize money.

"There was no question he was the best horse in the [Derby] race and he just didn’t win. Again, is there anything more I could have done? I don’t know. It’s terrible to pick two races but they are probably two Derbies that got away.

"If he did win that day it would have been a brilliant day, but he’d probably would have been swept away to stud at the end of the year. He might not have got to win nearly £2 million in prize money or whatever and win twenty-one races. He was an amazing horse; he was probably the best horse that I rode that never won," he said.

He was an amazing horse. He was a little bit difficult in that he was quite anxious in the gates and going to the start could be quite playful, but in the race, he was actually a jockey’s dream. It made it a lot easier for me to position him anywhere and he was 100% genuine, even though he wore blinkers. In the heat of the battle he gave you 100%.

Winning the St Ledger a huge thing, a huge achievement from the stable. I suppose that was the day that gave me the most pleasure. I suppose the biggest heartbreak was when he ran second in the Melbourne Cup. He was giving away a lot of weight and the winner got a huge run around there.

It’s a race I would have love to have won, there’s no two ways about it. But Vinnie Roe gave me great rides around there to finish second.

Winning his first British classic on Refused To Bend at Newmarket

That was a great day. It was probably my first taste of a proper classic horse, I know that’s undoing Vinnie Roe a little bit. He was just a proper horse from word go, his work was exceptional and he went in with his group one penalty and he won the trial at Leopardstown very well.

We went to Newmarket pretty confident he’d run a good race and thankfully he did.

The outside draw looked a bit of a disadvantage, but it turned out to be an advantage on the day because there was a bit of carnage down the inside. He was uncomplicated, he’d settled and he didn’t have to get cover and bury him to get him to relax.

I could sit on the wing for a little bit and then cross over and got led into the race beautifully. When he met the rising ground, he picked up and went away well. He was just the best horse on the day.

The 2016 Epsom Derby win on Harzand

No question, the biggest day. It is still the race that everybody wants to win, and it takes a good and special horse to do it. He was a very special horse from the word go, he worked well, but was a little bit immature.

He went to the derby and we were hopeful of a big run, and sure then there was the well-documented hassle with pulling the shoe off, travelling over, so I thought it wasn’t going to happen at all. But thankfully everybody worked closely together and worked extremely well and got the shoe back on. And as they say, the rest is history.

It got to the point where it was very 50/50 on whether he was going to run or not [because of the shoe]. Me being me; I’ve travelled over, if he’s not running make a call and I can get back for the evening meeting in Ireland.

Epsom causes so many challenges for a young, inexperienced three-year-old as what they are in the month of June. It sets the best apart from the rest and that is why it’s been such a significant race all down through the years.

People don’t realise how steep the run is down into Tottenham Corner and then around the bend. You have to have a very agile, athletic horse with a good action but not an over-extravagant action.

How I wanted to run the race was the way it fell for me.

He’s the best horse I ever rode, no question. I thought he would win an Epsom Derby. I very stupidly – after he won his maiden at Leopardstown, his owner was there, Eva Hefner, she was leading him back in – there’s a very famous photo of me putting my hand on her shoulder and leaning down to speak to her. What I said was; “This horse will win the Epsom Derby”. She got excited, everybody got excited.

He was just an exceptionally quick horse for a middle-distance horse and had the most amazing action on him. He got his big day in the Prince of Wales, but he probably should have achieved more only for injury.

I got a little bit carried away with him because I thought he was the second coming. His work was so good, and I knew how much talent was there. It was just frustrating that he hadn’t got to show what we knew he was capable of. It was a huge relief that he could win a race like that and I was more pleased for the horse than for anyone else.

[At Leopardstown], whatever caught Golden Horn’s eye that day – it was totally uncharacteristic of him because he never did it before and he never and he never did it after – but something caught his eye and he veered out so sharply and severely he definitely thought there was something on the inside rail. Frankie’s reaction was what you’d expect of a top-class rider, it was immediate, and he did everything you’d expect to try and keep him straight, but the damage was done. He hit me broad way and the horse could never recover from that to get going. To this day, would I have won? I don’t know, but I can’t say I wouldn’t have won. I damn sure would have loved to have a go at it.

I must admit that this is one day where I probably over-analysed the race, I thought too much about it.

Off the top of the hill I thought I was going to be nowhere, genuinely on the day. He was not travelling underneath me; he was going nowhere. I thought we were in big trouble. Down off the hill I was just trying to keep him in touch and keep him on the bridle as long as I could. In theory, I wasn’t going well enough to go in amongst the field and look for a run. When we started to make the approach down the hill and into the straight, I tried to go forward a little bit and get into the race and I got unduly pushed very, very wide. The race was gone on me then.

Cracksman, being the good horse that he is, in the last furlong he started to get going and really started to stay on. But I’d forfeited too much ground and I just couldn’t get there in time. No question, he was the best horse in the race that didn’t win.

If there was one race in my career that got away, that was definitely the day.

There was no question he was the best horse in the [Derby] race and he just didn’t win. Again, is there anything more I could have done? I don’t know. It’s terrible to pick two races but they are probably two Derbies that got away.

If he did win that day it would have been a brilliant day, but he’d probably would have been swept away to stud at the end of the year. He might not have got to win nearly £2 million in prize money or whatever and win twenty-one races. He was an amazing horse; he was probably the best horse that I rode that never won.