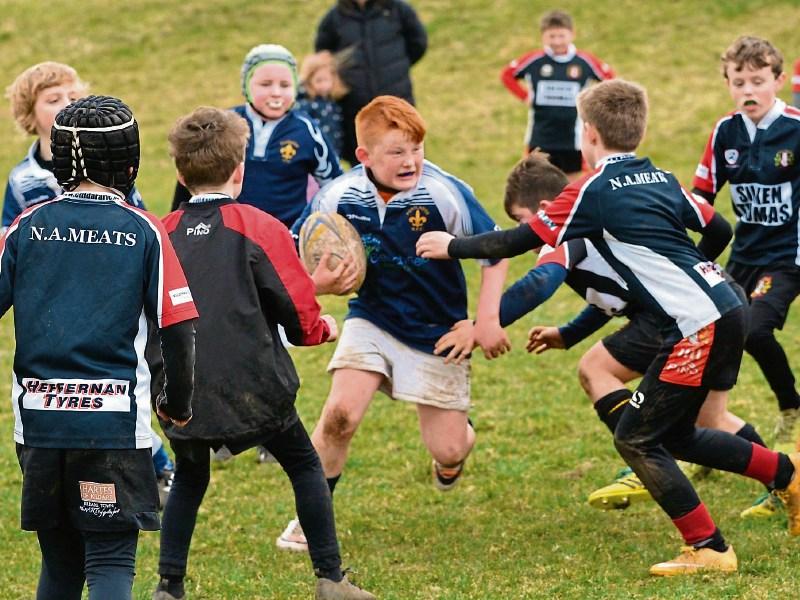 Portlaoise Rugby Football Club (RFC) has set out three options as to how it wants to develop the facilities in Togher in its new masterplan in a sustainable way that is environmentally friendly.

The overview to ‘Green Infrastructure Consultation Plan’, which is now open to public consultation, is ambitious.

The club says the plan will act as a comprehensive green infrastructure development plan to serve as a blueprint up to 2030.

Apart from wanting to develop the facility in an environmentally friendly way the vision for the project says it want to serve as a way to improve integration with the local community.

The club says it has prioritised pitch development in its 7.8 hectare site. However, it says there is scope to provide other sports with an opportunity to make Togher their permanent home.

The club says the immediate focus of the consultation is to introduce more sustainable and energy-efficient changes.

However, it adds that there is greater scope to develop the clubhouse.

“A larger more modern structure can be designed and constructed to meet the needs of a more vibrant and diverse community of members, users and stakeholders,” says the club.

It is also proposed that the new development would include a spectator stand to the southern side of the pitch to maximise the potential to host larger rugby matches and events.

The plan drawn up by Green Pine Consultants paints the picture of what the club's vision is for its facilities.

“Portlaoise RFC aims to develop a top class facility for rugby for the region and maximise the grounds for community use.

“The club also aims to minimise its carbon footprint as far as possible, energy usage would be reduced as far as possible with highly insulated building design, with energy-efficient appliances and LED lighting.

“Energy supply would be from solar panels and potentially a biomass boiler. Insulation within existing buildings would be improved as much as possible,” says the plan.

Under this option, the plan says the existing facilities would be expanded upon.

“The existing clubhouse and changing rooms would be retained and a new clubhouse be developed to complement them The new clubhouse would overlook the pitch adjacent to the existing car park. This pitch would not be upgraded and become the new main pitch,” says the plan.

- Linking two existing buildings with the new clubhouse and put the clubhouse more centrally in the grounds. The old clubhouse would be redeveloped into a multi-use hall.

Under this option, the existing buildings would be demolished and replaced with a new clubhouse.

This would entail the following:

- Location centrally to ensure the clubhouse is at the heart of the new development and overlook the existing pitch.

The club says an outdoor space could be dedicated for the development of other sports such as basketball, hockey, athletics, tennis etc. This could include multi-use ball courts depending on demand.

Both options include these other key objectives.

- Optimise grounds for sporting use.

- Maximise grounds potential for biodiversity and community use.

Both options say the proposed hall under both options could accommodate club activities, classes, events and other sports.

The plan says the aim to develop the grounds and new development as an 'exemplar' in biodiversity integration in sports facilities. Some of the key points are:

- Manage the unused grass areas around the main pitch as wildflower meadows during the summer.

- Retain and enrich the existing woodlands.

- Use vegetated bioswales in the new car park.

The plan says Portlaoise RFC has the opportunity to influence and encourage, residents, business and others in the community to enhance green infrastructure.

The plan also proposes that the club engage with the M7 service stations to maximise green infrastructure on their sites for biodiversity.

It also proposes partnering with other clubs in the town that deliver biodiversity such as Portlaoise GAA.

The plan says there is a strong case to develop a new 4.6km Slin na Sláinte walking route with Laois County Council and the Irish Heart Foundation.

A network of safe cycle routes close to the grounds are also advocated for. This, the club believes, would also encourage members to cycle to the club.

It is also proposed that Portlaoise RFC could lobby for the creation of new waymarked walking and cycling routes connecting the club and Togher woods.

The plan proposes the development of the old Waterford & Central Ireland Railway as a heritage and amenity project.

It says sections of the line which went to Mountmellick, run along the western boundary of the Togher site on private land. The plan says old railway lines have been developed across Ireland and such an idea has been floated in Laois over the years.

While such a project would involve detailed work, the club's plan says the section between Portlaoise town and the sports grounds could be supported by the club. Further expansion could be carried out after peat harvesting ends at Cul na Mona.

The plan says new information posts could be installed at intervals along the proposed track to interpret the railway and other local heritage.

Thanks to technology, the club has got around Covid-19 to open public consultation on what the proposals.

The virtual consultation takes you through rooms where the aims and plans are available to see at the click or tap of a screen.

Once feedback has been received from the questionnaires that are embedded in the consultation link, the next steps will be to develop a comprehensive.

Portlaoise Rugby Club received grant aid from Laois Partnership and subsequently engaged Green Pine Consulting in Laois in partnership with engineering company ‘RPS’ to complete this consultation plan with Brian Gaynor from Green Pine who was appointed project manager for the project.

The consultation document can be viewed in full at the link www.consultationspace.com/PRFCDevelopmentPlan/